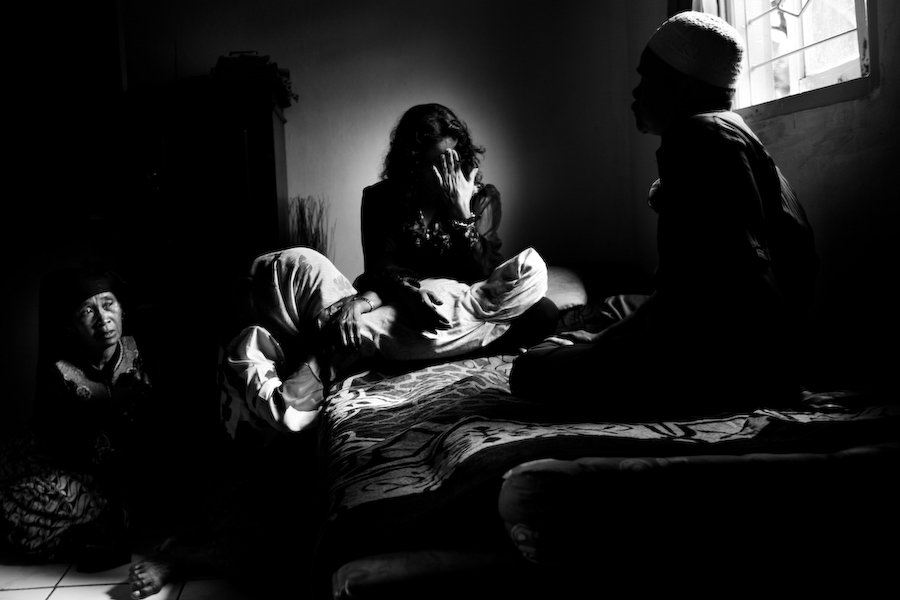 This project is about an Indonesian migrant worker who has been abused during her 5 years stay in Malaysia. Her name is Nur.

Nur migrated to Malaysia November 2010 after an agent in Indonesia offered her a job for a promised monthly salary of RM400. All the documentation and process required will be managed by the agent, which the costs will then reimbursed by her first 4 months salary in Malaysia. Without signing any agreement and undergoing any training which is compulsory for Indonesian migrant worker who wants to works abroad, Nur has agreed to the offer.

Nur arrived in Malaysia by the sea and on arriving, she was picked by an outsourcing agency in Kepong. When asked by the agent who was in charge, Nur said that she wanted to work in Malaysia for 2 years. She was assigned to a Chinese family in Rawang, and her passport has been kept by the agency.

This is where her nightmare begins. She is demand to work from 7am until 11 at night daily performing all sort of house chores. Through out the whole ordeal, they had never paid her salary, denied her freedom to keep in contact with her family, and they restrict her movement.

All these abuses happened during her employment for 5 years.

Nur knows that she was supposed to work for only 2 years, and return home. But after being convinces to stay longer by her employer, who promised her to pay he salary in full, she reluctantly decided to stay. She did try to buy her way out of the situation on the 4th year, but she was forced to stay when her employer threatens to report her to the police that she is trying to run away.  In early August 2008, Nur threatened her employer that she wanted to return to Indonesia for having worked in Malaysia for 5 years without salary. She had enough when she withdraws a knife and threaten to kill herself if they do not pay her over due slavery and send her back to Indonesia.

Nur wakes up to found herself lying down naked and covered by banana leaves with two men standing on her side. They explain that they found her body swept by the waves to the shore and thought she was dead.

They finally agreed, and told Nur that they would send Nur returned to Indonesia with an airplane and give her RM1000 as wages for a period of 5 years. Nur was devastated as she definitely expected much more than this tiny amount after working relentlessly for 5years, but she has no choice but to accept it, because all she can think of is to go home to her family who have lost contact with her. All she wants is to reconnect with her mum, husband, and daughters in Sukabumi Indonesia.

What happened next is disastrous. Nur was sent to a flat house by her employer, and as she was told to wait there until someone come to pick her up. Little that she knows, that her fate is now in the hand of human trafficking ring. In awol orchestrated plan, Nur was picked up by a guy, who later buys two bus ticket to Johor Bahru for them to board. Johor Bahru is notoriously known as the centre of human trafficking in Malaysia. As they arrived in Johor Bahru, Nur was sent to a house, where a man called Shurtan keep her and 6 other people. They all have the one thing in common, to go back to Indonesia. Apparently, Nur’s employer has give her to a human trafficker to send her home illegally. The why they opt to do that remains unclear. ( They are now have been charged for abusing Nur, but they denied their involvement in this )

Nur was told to be ready by Shurtan and at 3 am, everyone in the house was brought to a secluded beach and was told that they are going to board a boat to Batam, Indonesia. The catch is that they all have to swim to the boat, which remain in a International waters’ “free zone”, 100 meters away from the shores. Nur, with 3 huge bags in her possession, and her disability to swim, was drowned by big waves .

Nur wakes up to found herself lying down naked and covered by banana leaves with two men standing on her side. They explain that they found her body swept by the waves to the shore and thought she was dead. They help her clean herself, and advise her to go back to Rawang, where her employer stays, as it is impossible now for her to go back to Indonesia through Johor Bahru. The trafficker is gone, her money was sweet away by the waves, she had a nothing left on her.

The two guys bought her a bus ticket, and Nur board to Kuala Lumpur for help. As soon as she arrived at her employer’s house, she was rescued by one of the neighbor, and after hearing her terrible ordeal, they send her to Tenaganita, a NGO that deals with woman migrant worker issues. Tenaganita since has taken her under their wings, and provide shelter for her. After 2 years processing her documents, and fighting for her case and helping her to contact her family again, Nur has finally been granted a permission to go home by the Home Ministry Department. I had the chance to be part of her journey when Tenaganita invited me to document this new chapter of her life. I quickly feel what she has went through as we travel together to her homeland, Indonesia and i could see ho her emotions were shattered and happy at the same time. Shattered due to her failure to provide a better life for her family back home after spending almost 8 years abroad, but happy just to be alive and to be able to see her family again after what  she has been through.

Neither Beginning nor End, by Peter Teh
Photobook: The Flock Project, Indonesia
The Half Breath Battle, by Yoppy Pieter