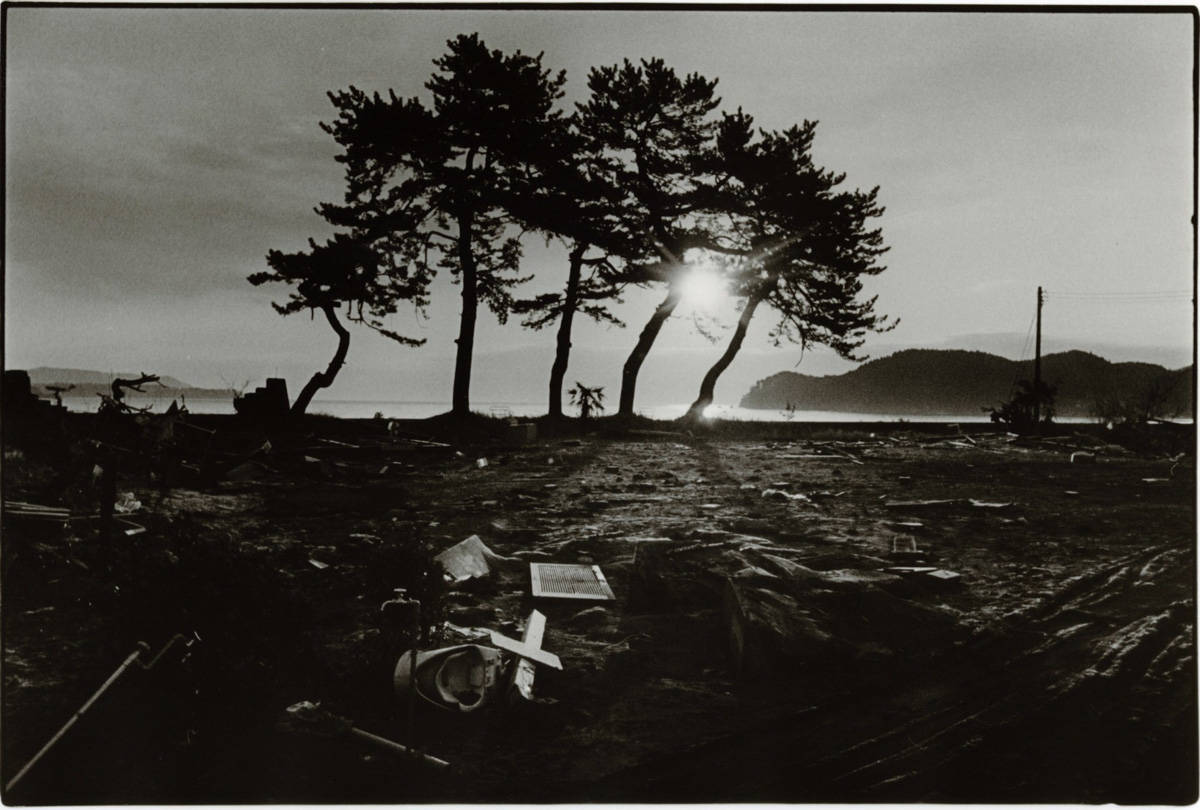 If I Had Wings… After The Tsunami

At the very moment the earthquake hit Japan, I was on the road to Shikoku. I could not sit still, and when I ate sanuki udon, the local specialty, it was tasteless.

I am not a journalist and photographing disasters was never on my mind, but the urge to visit the site and the victims had me compelled. I shortened my trip and took a ferry from Matsuyama where I was heading to my parents’ place in the Yamaguchi Prefecture, and drove north in a car I borrowed from my father. A week had already passed since the tsunami.

The shock I felt from seeing the hard-hit areas is far beyond description. I had been unable to have mental images of the disaster areas before I arrived there. I was ashamed of my lack of awareness and imagination. The car radio was playing the anthem sung by a seventeen-year-old girl at the opening ceremony of the National High School Baseball Invitational Tournament. Listening to her sing the anthem bought tears to my eyes, something that had never happened to me before. My tears mixed with the dust raised by the armored vehicles of the Self-Defense Forces clouded my vision ahead. The scenes surrounding me resembled those of bombarded cities, but the only difference was that the disaster areas were not dispersed in spaced out spots, but stretched out in one long, broad band along the coastline.

I met a woman in a disaster-stricken district. She asked me to lend a hand at an evacuation center to which I accepted. Women there made rice balls for refugees, and men hauled in wood from the disaster sites and chopped them into firewood. Food was in plentiful supply at the disaster areas compared to the people who had undamaged houses – they seemed to be suffering from shortage of food. I heard that some elderly people felt bad about escaping harm and did not turn up to collect food. I suspect that they felt the same way as the former Japanese soldiers who were ashamed of returning home alive after the last war. The person in charge of the center offered me shelter and food, but I declined his offer. I cooked myself rice, slipped into a thin three-season sleeping bag, and shivered in my car during the night. The starry night sky in Tohoku was really lovely.

The next day the woman, finding out that I had slept in my car, invited me to stay at her house where she lives with her mother and brother. Power and water were cut without prospect of restoration so the rooms in her house were lit only by a little lantern and candles. Three men came by, and they shortly began to discuss a funeral plan. It was then she whispered to me “Sorry. I didn’t tell you, but my father died in the tsunami.” He was washed away from the fourth floor of Takada Municipal Hospital, where he was hospitalized, and was later found dead in the lobby on the first floor. Her brother had been busy with the recovery activity of their district and their father had been dead for two weeks. It was twenty days after the tsunami that he was cremated. The photo on his physical disability certificate was enlarged to be used as a funeral portrait. In such tragic circumstances, they still offered food and shelter to me, a stranger to them.

I had driven for more than two thousand kilometers since I left Yamaguchi, and there was barely enough gas left in my car to return to Tokyo. I could not fuel my car in the devastated areas as they were facing a serious gas shortage, so I made up my mind to leave Tohoku the next morning. The old mother handed me home-made umeboshi (pickled plums) and nori-no-tsukudani (laver boiled down in soy) as mementos, and told me “You be sure to come back someday.”