Part 7 transcription of the Q&A session during the public talk given by photographers Alex Webb and Rebecca Norris Webb, and David Chickey of Radius Books, at The National Museum Of Singapore on 9th March, 2012. 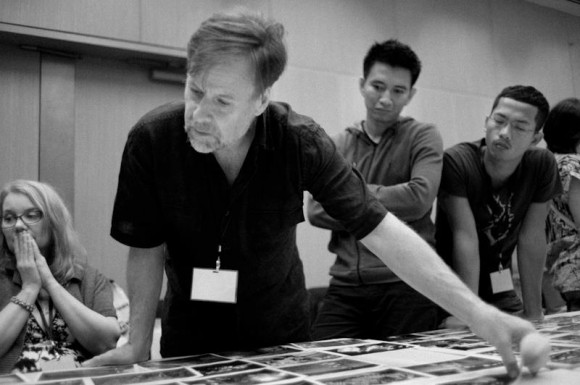 Question: Hi Alex. This question is for you. I hope you don’t take it the wrong way. (Audience laughs)

Alex: I am ready to take it the wrong way. (More laughter)

Question: Is there anyone in Magnum who absolutely hates your work? Or slight disdain for your work? And why? You don’t have to name names, you can just share with us.

I mean. Well, one of my favorites that happened some years ago is this photographer came up to me and said, “I’ve known you for twenty-four years. I think I finally get what you’re doing.” (Audience laughs)

So. But look, Magnum photographers are generally not particularly diffusive about each other’s work. (Audience laughs)

Look, I need to get very careful whenever I show work to anyone. To figure out who they are, where they are coming from. Some photographers don’t like it because it’s like theirs. Or you know, you know. I try to pick and choose very carefully people who I think will respond in interesting way to my work and understand something about what the work is and where I am coming from.  That’s why particularly Rebecca is one.

Question: Ok. Thank you. I’m asking because your work is very easily likeable, accessible I guess, so I just want to understand if there are people who don’t like it.

Alex: Look, it’s not just this thing. Look, there are different range and kinds of photography. There are people who don believe in colors. You know, believe that everything should be shot in a 8X10 camera, or whatever.

So, you know, I think no matter who you are, there are always going to be people who don’t like your work. You know, you listen sometimes to some of those people because sometimes they say something illuminating but you also dismiss a lot of them as something that isn’t helpful.

PLATFORM 10 Slideshow: Ten New Faces in Singapore Photography
Sometimes you can destroy your photography by being a photographer
Women in Photography: Gender, Access and Sustainability