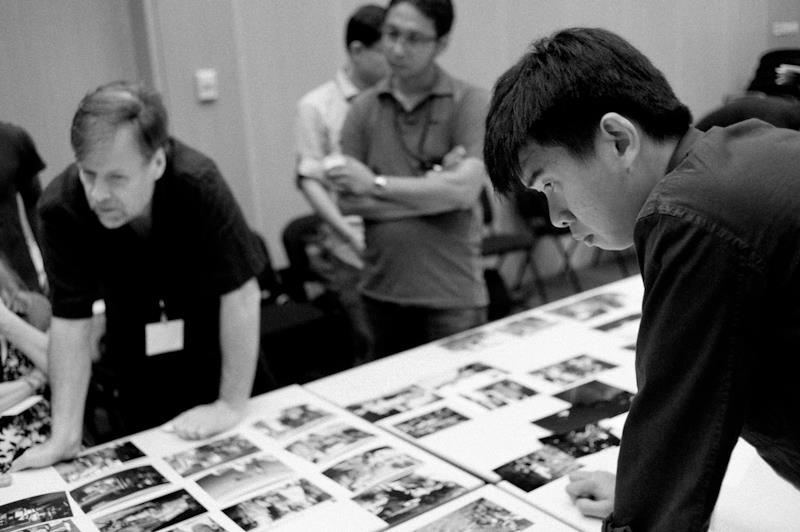 Part 9 transcription of the Q&A session during the public talk given by photographers Alex Webb and Rebecca Norris Webb, and David Chickey of Radius Books, at The National Museum Of Singapore on 9th March, 2012.

Question: Having photographed in a foreign country myself, I understand that you really have to get into that environment and be comfortable with it. For your US-Mexican project that took 26 years, how did you get access for that? Because Mexican families will not really allow you to get into their homes, photograph them getting caught by the US border patrols.

No, really. There are drugs and people going north and there are guns going south. You know, I mean I’ve crossed the border a number of times with illegal Mexicans. And typical of my experience, you know, was like running into some guys in a little town, started talking and they said they were crossing the border and I said, “Well, I am a photographer, can I come along?”

And they thought about it and you know, they don’t necessary understood the notion of, you know, photojournalist photographing something but they kind of like the idea that this “guero” who is about their age, wanting to come along with them. I bought them some tacos and we spent a couple of, two days and nights wandering through the mountains.

It amazed me that it was so easy on some level. But you know, it amazes me often how easy it is with a camera if you are sort of easygoing and give off an aura that somehow you have some seriousness to your purpose that people will let you into their lives. There are times out there, I sort of step back in the situation and thought, “How can I possibly be here as it’s so remarkable and amazing?” But the camera does act sometimes as a kind of passport that allows you into situations.

But like I said the borders, you know, yah, I’m sure the drug dealers are particularly happy with me photographing around them. But, but it’s a remarkably easy going place, in some ways, certainly, less so now than when I did the bulk of my work. I mean it’s true that the presence of the drug cartels now have produced a different level of tension.

Question: Hi Alex. I like to find out, most of your work has a lot of linears. What draws you to doing it?

Alex: Look, again it is something that evolved. I mean, if you look at my black & white work, you see the roots of it, you see some pictures that do have this sense of layering but it has gotten more and more complex as I think time goes on. And probably is most complex in the Istanbul work which is simply, Istanbul is such a complicated layered place.

But look, I think it has to do with, that I believe in a certain level of complexity. I think the world is a very complicated place and humans beings are very complicated. I think we’re full of all kinds of complicated emotions that often are divergent or conflicting.

I am always looking for something else, something else that qualifies it on some level. It’s not that, you know, I don’t want to photograph just that and that, I want to photograph that, that, that, that and that, that. At the same time, somehow make it all into a coherent pool and often, you know, as a photographer, I find stuff right at that edge, the frames on the verge of spinning out of control. And just trying to hold it together. You know, for me, it is something that intrigues me, as I said, it’s part of something, my philosophy of life, my outlook on life.

A Show of Hands and a Tale Of Two Countries : Notes from the IPA Photo Books Show 2013
Reflections: Seoul Impressions
Women in Photography: Gender, Access and Sustainability