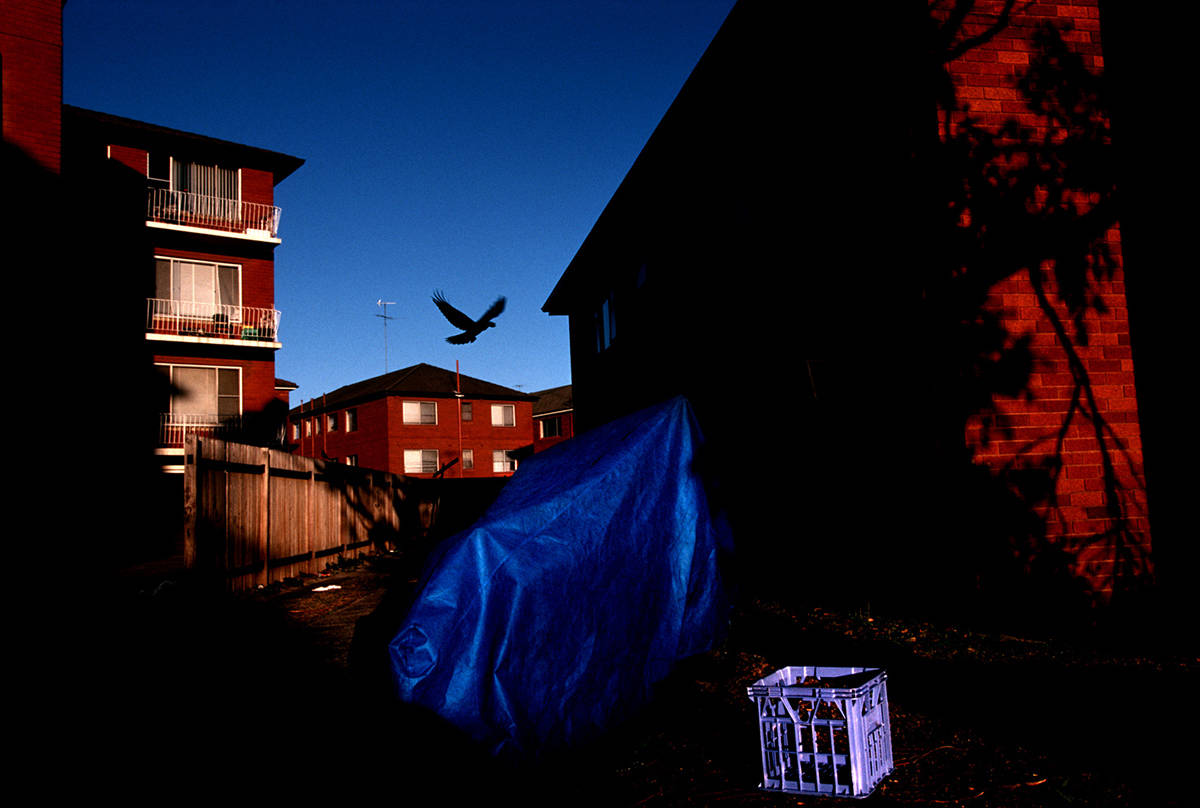 In the 1950’s, some poor, working class suburbs such as Hillsdale embarked on an ambitious social experiment to settle young migrant families and hence the birth of the ‘red brick flat’. Today the red brick flat though architecturally void and aesthetically barren has earned itself iconic status on the contemporary Australian suburban landscape and continues to support low paid, newly arrived migrant families.

Dean Sewell’s long-term project documenting a Red Brick Wonderland required immense patience and a distict vision as the light and weather conditions had to be perfect to capture his chosen aesthetic of a limited colour palette capturing blue, black and red on film.  He has coined the term ‘Conceptual Documentary’ as his chosen genre for this photo essay.  British photographer Martin Parr has also used this term to describe the blurring of art photography and photojournalism to create concept driven documentary. In an interview for American Suburbx in 2007, Parr used the term “ConDoc, which stands for ‘Conceptual Documentary.’ To me, it seems to be one of the emerging genres….We live in a chaotic world and the rigour of the analysis that conceptual documentary brings can help make sense of the chaos of the modern world.” Sewell’s relentless pursuit of a distinct colour palette in rich saturated hues in Red Brick Wonderland creates a piece of art, documentary and history focussing on banal scenes we walk past every day but rarely ever really see until someone has a vision and frames it as an extraordinary seies of photographs.

Why did you do undertake the project photographing Red Brick Wonderland in Sydney’s Hillsdale suburb?

The decision to start a project on Hillsdale was born out of a desire to turn the lens back on the place of my childhood upbringing. My family moved into Hillsdale in 1974 due to the locality of my father’s workplace there. He worked as a rigger at ICI (international chemical industries which is now known as Orica). The Orica site Botany runs along the southern flank of the entire suburb of Hillsdale giving it a claustrophobic, heavy industry feel. In 1978 the family uprooted from Hillsdale and moved to the adjoining suburb of Botany where I spent my teenage years and early adult life growing up. But I never truly lost my connections to Hillsdale, which was composed entirely of red brick unit blocks because many of my friends grew up there and even continue to live there to this day. As my love of documentary story telling evolved, I considered it time to turn my gaze on my own backyard so to speak and examine the place from which I was raised as a child. I wasn’t so much interested in answers to the bigger questions of life, but how people fitted into this eerily barren and culturally void landscape. Culture certainly exists there in the form of its inhabitants, but is auspiciously absent in the architectural aesthetic that defines it.

What was your aesthetic approach to the series in terms of light and colour? How did you achieve the colour palette?

I’m not sure if it is even a term to describe a genre of photography but I use the term ‘Conceptual Documentary’ as it is a conceptually driven documentary project. After years of deliberation on how to progress with the project, it had become apparent that the most significant aspect of Hillsdale was in the architectural monotony of street after street lined with red brick flats. On a preliminary excursion there one day, I decided I’d take a roll of transparency film that contained supersaturated qualities. Prior to this I had only ever used black and white of colour negative films. It was early spring and mid afternoon. There was a prevailing westerly wind; the sky was blue and the air quality free from lingering pollution or haze. The sunlight that filtered through the gaps of the unit’s blocks illuminated others. The red bricks seem to glow against the blue of the sky and the black of the deep dark shadows. Garbage bins colored blue and red receded into the distance, a red car came down the street at me and it was there and then I saw essentially three colours…blue, black and red. I wondered what it might be like to produce a series where I’d strip back the color palette to containing essentially these three colors? I became determined to replicate similar lighting scenarios to create a uniform aesthetic. Over the five years that it took me to produce the series, I had discovered that I required the months from late winter through spring (roughly 4-5 months) to have the sun in the right position in the sky and prevailing westerly winds to guarantee clear blues skies and an air quality that would produce crisp unfiltered light. Using saturated color transparency film and slightly underexposing it, I could produce a completely saturated aesthetic.

You are known for your projects in black and white, why did you switch to colour for this project?

Most of my earlier projects were essentially social documentary projects. This project was as much about the urban landscape as it was about the people living there. It was more geometric and abstract then intimate. I wasn’t setting out to produce social commentary and color was completely necessary for its success.

How would you describe your shooting style for your projects?

I’m not sure how to classify my own style. Earlier on in my career I say I approached documentary with a pretty conventional, traditional form of documentary with little pretense. I was inspired in my early years by people like Bruce Davidson, Eugene Richards, Susan Meiselas, Sebastio Salgado, Marc Riboud and James Nachtwey to name a few and aimed to emulate a similar, no nonsense, truthful and humanitarian viewpoint. My Hillsdale series couldn’t be anymore removed from my earlier works and is more about the study of color, way less intimate and more about geometric abstraction.

What are some of the challenges that you faced making these photographs?

The most difficult challenges I faced were the doing of my own, self imposed parameters. I had such narrow margins of light hours to work within and the weather conditions that I required achieving the end results. Because I was using such a narrow colour spectrum i.e. red/blue, anyone entering my field of view might be wearing those colors. Of course, I was never that strict and allowed at times for other colour arrangements to interfere.

Why is this project important in terms of Australian culture and history?

While I never set out to make a historic document out of Hillsdale and the disappearing red brick flat from the urban landscape, I think history will only make this body of work more relevant. To most, the red brick flat is the scourge of the urban landscape. There are pockets of red brick flats scattered all throughout Sydney but no more defining to an entire suburb than that of Hillsdale. Even three years into this project and I was witnessing the disappearance of them from Hillsdale. Developers were buying them up, rendering the facades and painting them Olive green, knocking out the odd wall and reselling them as designer apartments. I guess there will come a day when the redbrick flat is no longer a feature of the urban Australian landscape, when low cost accommodation for newly arrived migrants has vanished and building codes place an emphasis on aesthetic based architecture over the mere practical.

DEAN SEWELL has made his name as an independent documentary photographer concentrating his gaze on the social implications of the new globalized world economy and the environmental consequences exerted by climate change. Sewell was the winner of the 2009 Moran Contemporary Photography Prize. He has been the recipient of three World Press Photo Awards in 2000, 2002 and 2005 for works covering the transition of East Timor to an independent state, Australian Bushfires, and the 2004 Tsunami aftermath in Aceh, respectively. Sewell is represented by Charles Hewitt Gallery, and has work regularly exhibited in leading Australian and International galleries. He is a founding member of Oculi, an Australian collective of photographers. Website: http://www.oculi.com.au

TAMARA VONINSKI recently bought an old caravan to travel and explore Australia following a redundancy from the media where she worked as a photographer for magazines and newspapers.  She is a founding member of the Australian photo collective Oculi. Her photographic projects have received multiple international awards and residencies including: International Pictures of the Year Awards, AGNSW residency at Cite Internationale des Arts and Alexia Foundation Photography for World Peace grant. Follow Tamara’s journey around Australia via her blog http://www.gypsypoptop.com. Website: http://www.tamaravoninski.com.au