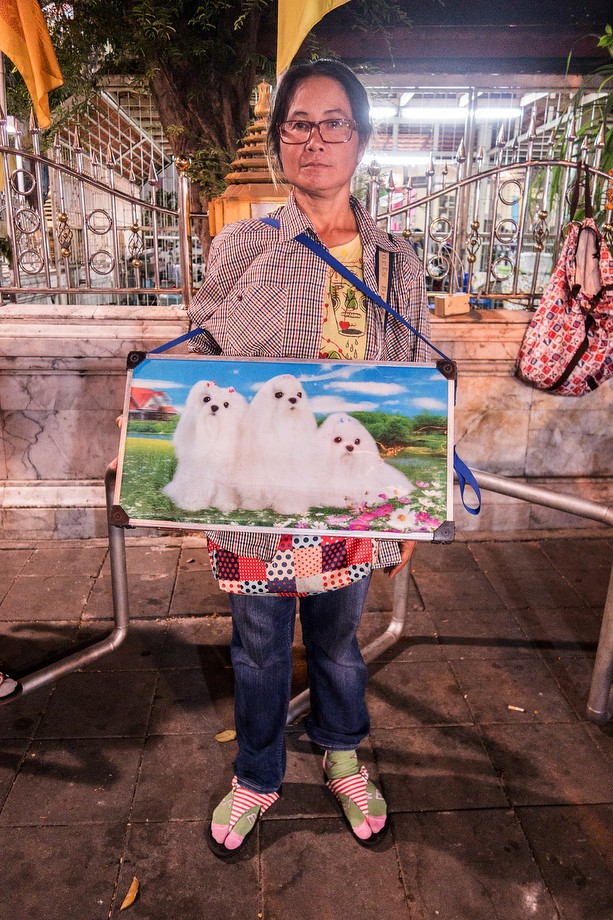 The lottery in Thailand will be drawn twice in each month, 1st and 16th; between those periods, you’ll easily find a lot of sellers carrying lottery ticket tray around the town and keen to sell a lottery ticket to you.

Most of lottery sellers will be lower middle class people in Thailand who move from various provincial areas to Bangkok for finding some work to do and lottery selling is what they choose. The lottery ticket price is now 80 baht ($2.2), which has been recently reduced from 100 – 120 baht since overthrowing by Junta (Prayut Chan-o-cha). If you’re lucky enough to win the first prize, you’ll get 6 million baht ($167,000), but usually Thais will hope just last 2 digits (from all 6 digits) and prize is 2,000 baht ($56).

Besides the huge prize which quite hard to win, something interesting hidden under the ticket tray. It’s some kind of traditional painting; such as flower, animal, portrait of the past king, etc. But so pity, no one cares about these art pictures. Buyers do care just winning the lottery and daydream that how to spend money after getting the prize. Also sellers do care just how they will sell out before their lottery tickets become to worthless papers.

Not surprised if those art pictures will be completely ignored because they aren’t the objective of lottery and who’s care what pictures will be, if they’re still able to sell or buy a chance. Well, that’s not totally true actually, many unexpected things waiting to be found, seen, and felt except winning or money. Though since I made this project I have never won from the tickets I bought, but with those discovered pictures; I think I have already got the prizes.