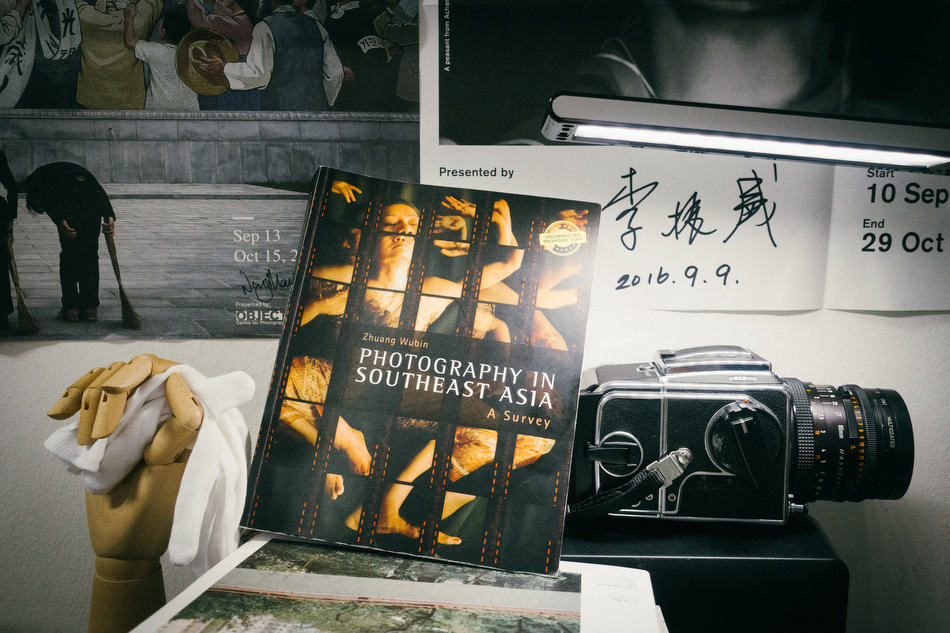 I’ve known Zhuang Wubin for a while now. We’ve had many conversations, collaborations, and debates over the years. He told me he was working on a survey book from as long as I can remember. I almost didn’t believe he would ever finish.

Well, better late than never. I now finally have a substantial 524-paged hard copy in my hands. Published by NUS Press, Photography in Southeast Asia: A Survey, By Zhuang Wubin will officially be launched on Thursday 13th October at Objectifs Centre for Photography & Film, Singapore.

Informed by years of research in Southeast Asian photography, Wubin’s extensive survey, covering generations of practitioners across 10 countries from Laos to Singapore, extends beyond to offer a glimpse into the region’s colonial and post-colonial histories, politics and social landscapes, all of which are inevitable path pavers and dividers in the way we have come to make, consume and value images and their makers. Wubin also enters rare territory in today’s photography and art writing – criticism, and notably, advocacy and sympathy for the ‘straightness’ of more traditionally motivated and inclined practitioners of photography – outliers, if you will, to whom contemporary art establishment have more often than not, been antagonistic towards. Wubin assumes a counter position, frames a narrative, and delivers them clearly in unmistakable Wubin style. And, most would appreciate, in accessible language.

Photography in Southeast Asia: A Survey, By Zhuang Wubin is a valuable resource and photography in the region can only benefit from its aspirations. Highly recommended. 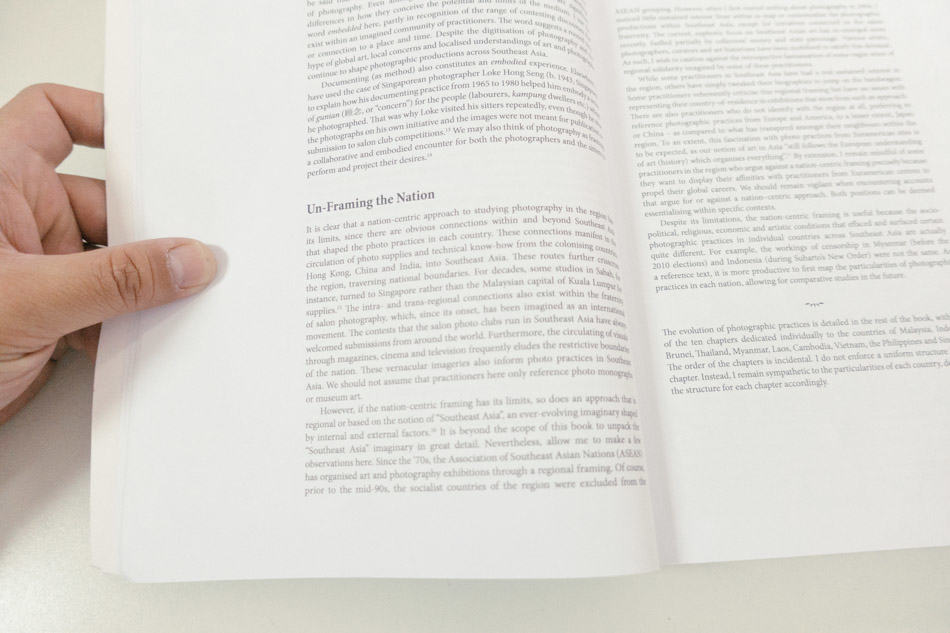 Excerpts from the introduction of each country surveyed:

“The first section of this chapter on Malaysia introduces some of the early innovators who have, deliberately or otherwise, positioned their practices against the dominance of Pictorialism. The second section focuses on artists who emerged in the early ’90s. With the exception of Soraya Talismail, they shy away from being called “photographers”, labelling themselves as artists who use and manipulate photography in a conceptual manner. The last section marks the gradual shift in limelight back onto photographers who believe that it is possible to adopt a straight, documenting approach with a critical and conceptual mindset…”

“In this chapter, I raise some of the polemics surrounding Indonesian photography because they continue to resurface and frame the medium’s evolution. On the part of the practitioners, there have been varying attempts to address some of the above arguments, as it should become apparent in the following sections. The first section provides a tentative overview of the multivariate development of photography from the late colonial era to the contemporary turn. The other sections focus on the multitude of photographic practices in different localities – Jakarta, Bandung, Yogyakarta and East Java – since the 1990s…”

“A possible entry point into the development of photographic practices in Brunei comes via the Brunei Photographic Society (BPS). Endorsed by the government, the BPS was founded in 1968 and comprises around 100 active members today. It organises outings, competitions and workshops regularly. Broadly speaking, its members, either consciously or otherwise, continue to seek the perfect image in their interpretations of Pictorialism or salon photography. Like pictorial practitioners elsewhere in Southeast Asia, their understanding of salon photography has been inflicted by the conservatism of competition culture, the primary means for the photo club members of the region to gauge their work…”

“Unlike her neighbours in Southeast Asia, Thailand was never colonised by European powers. For the rest of the region, the arrival of photography was mediated by colonial rule and economic exploitation. Recognising the intensification of European power, the Siamese royal family played an active role in the transfer of photographic technology to refashion “its public image as a national, progressive institution”. The first section of this chapter takes this fissure as its starting point. The metaphor of rupture is useful here because the arrival of photography in Asia “marks and figures the experience of a new, technologically mediated historical consciousness and a new experience of history as the name of a mutually othering relation between the bearers of technology and their others”…” 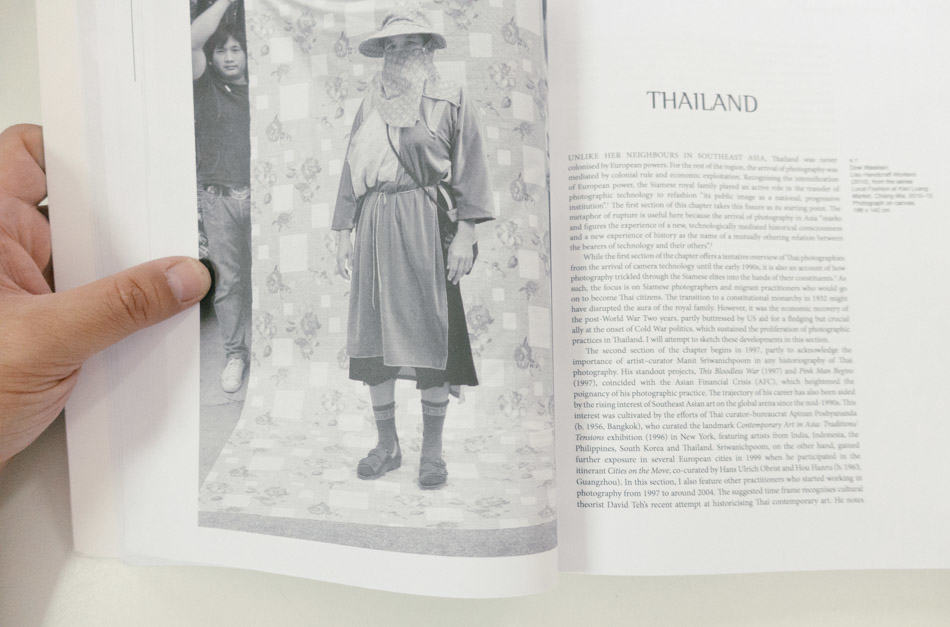 “This chapter begins with a brief account of photography’s arrival in Burma and charts its transfer to the people who would become citizens of the independent country. The second section offers a tentative overview of documentary photography in Myanmar, beginning with the work of Htein Win in the mid-90s. I attempt to contextualise the deployment of censorship from that period until 2011, when the country surprised the world by embarking on its liberalisation process…”

“At first, Laos seems to embody a distinct lack in photographic practices since the nineteenth century. In truth, this is because we know very little about early Lao photography. Moreover, curators and art writers are not always that interested in the vernacular and journalistic practices of photography but are often attracted by what they recognise as art photography. Through such a framing, it is no surprise that a history of Lao photography fails to emerge.”

“Cambodian lives underwent massive upheavals in the years leading to the Lon Nol coup that deposed Sihanouk in 1970, during the American bombings from 1964 to 1975, the brutal reign of the Khmer Rouge (KR) from 1975 to 1979, and the subsequent Vietnamese rule until its military withdrawal in 1989. Ironically, the dislocation also offers a “Year Zero” for curators and art writers to begin their varying accounts of Cambodian photography…”

“The official account of photography history credits Nguyễn dynasty (1802–1945) mandarin Đặng Huy Trứ (1825–74), a native of Hue in Central Vietnam, as being the first person to import the technology to Vietnam. He learnt about photography during a visit to Hong Kong in 1865. In 1867, Đặng bought his first camera from Guangdong. By 1869, he had opened Cảm Hiếu Đường (literally “The Road to Filial Piety”), the first photo studio in Hanoi…”

“Like elsewhere in Southeast Asia, locals and migrants who would settle in the Philippines started using photography, at least since the turn of the twentieth century. But to plot the history of Philippine photography demands a sustained attempt at mining the archives. Unfortunately, the quality of documentation has not been consistent over the decades. Nevertheless, through the essays of different writers and the printed portfolios of photographers scattered across a variety of sources, it is entirely possible to create a preliminary sketch of what has transpired in the last century or so. It is a narrative (or narratives) consisting of ingenious individuals who found ways of working under challenging conditions. It is also a story of various initiatives, however short-lived, that attempted to elevate the medium to a higher level…”

“As we begin the historiography of photography in Singapore, it is important to look beyond the categories of photographic practices, so as to re-contextualise some of the archival, journalistic and salon images. Admittedly, this is motivated by the desire to have a more comprehensive canon of art photography in Singapore, a less radical stance than that of art historian Geoffrey Batchen, who notes that having an expanded canon brings “momentary value, but what is needed here is a rethinking of the whole value system that canonization represents”. Given the fact that it is the art market that drives, directly or indirectly, much of the current interest in photography within Southeast Asia, it is premature to expect our curators and art writers to adopt such an approach, which reveals “the shallow artifice of their historical judgment, and of the notion of the artwork on which it is based”…”

Photography in Southeast Asia: A Survey is a comprehensive attempt to map the emergence and trajectories of photographic practices in Southeast Asia. The narrative begins in the colonial era, at the point when the transfer of photographic technology occurred between visiting practitioners and local photographers. With individual chapters dedicated to the countries of Brunei, Cambodia, Indonesia, Laos, Malaysia, Myanmar, Singapore, Thailand, The Philippines and Vietnam, the bulk of the book spans the post-WWII era to the contemporary, focusing on practitioners who operate with agency and autonomy. The relationship between art and photography, which has been defined very narrowly over the decades, is re-examined in the process. Photography also offers an entry point into the cultural and social practices of the region, and a prism into the personal desires and creative decisions of its practitioners.

Zhuang Wubin is a writer, curator and artist. As a writer, Zhuang focuses on the photographic practices in Southeast Asia. A 2010 recipient of the research grant from Prince Claus Fund (Amsterdam), Zhuang is an editorial board member of Trans-Asia Photography Review, a journal published by the Hampshire College and the University of Michigan Scholarly Publication Office.