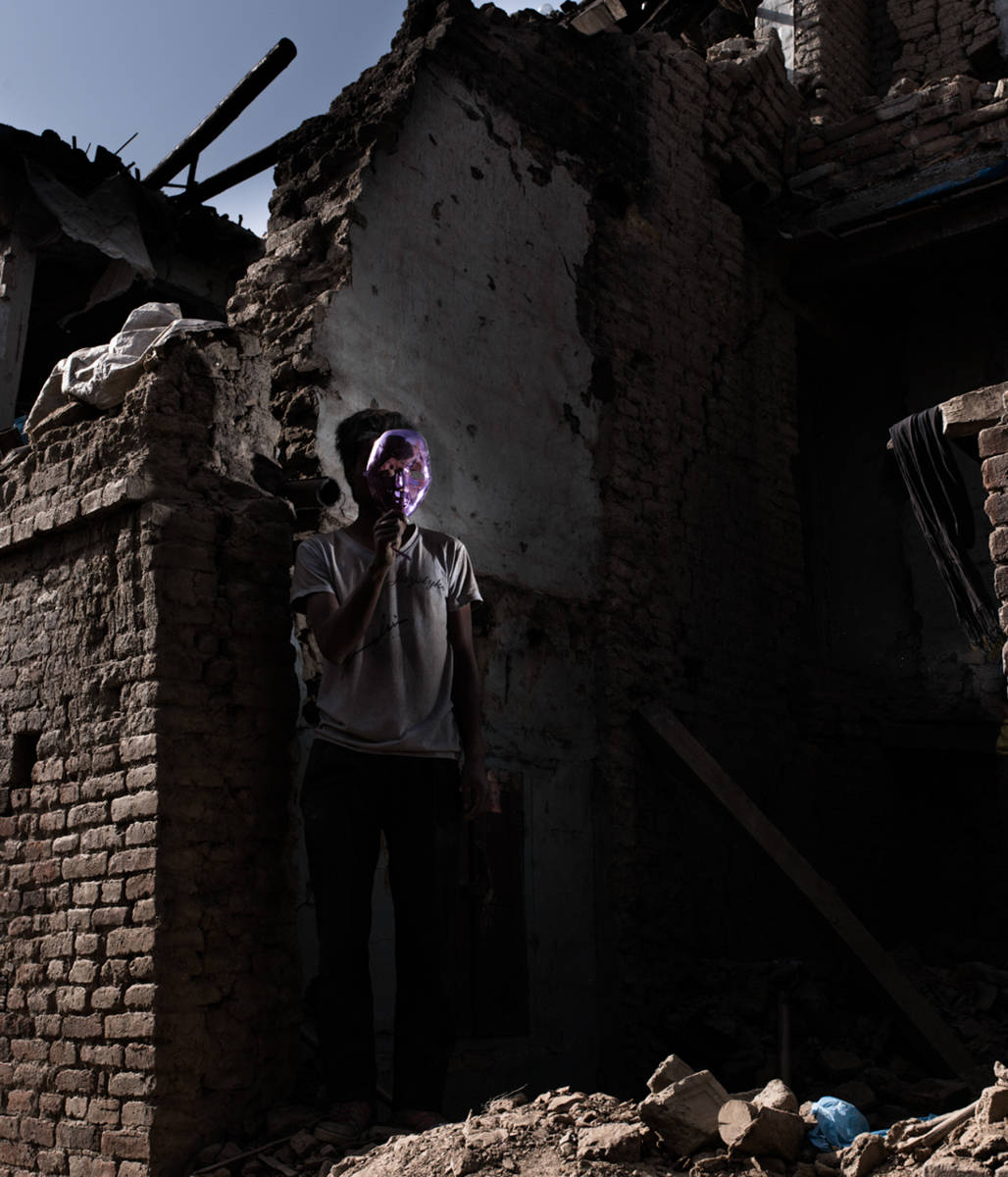 Between Grief and Nothing portrays dystopia caused by the Nepal earthquakes using a fictional narrative approach and adopting symbolism, mythology, performance and an active interplay of colours to evoke that mood.

2015’s twin Nepal earthquakes killed nearly 9,000 people and affected another 2.8 million. Loss of family and habitat, and over 300 incessant aftershocks exacerbated their sense of fear. Extreme stress and trauma created a dark psychological crevice that was difficult to be portrayed. While almost everyone was documenting the disaster, I felt compelled to look at the mental and emotional state –– universally similar human responses triggered by any disaster, tragedy or personal crisis irrespective of geography.

The Sleep and Circadian Neuroscience Institute at Oxford University in a recent study found that ‘Sleeping after a traumatic event or going to bed angry could make bad memories and flashbacks worse, substantially augmenting possibilities of Post-Traumatic Stress Disorder setting in. Trauma interferes with the processing of events, thus corrupting our memory. Likewise, “the photograph can be an aid to memory, but it can also become an obstacle that blocks access to the understanding of the past. It can paralyse the personal and political ability to think beyond the image in the always-fraught project of remembrance,” cautioned David Campany.

This series attempts to represent that fear and dystopia.

I researched on local iconographic codes, interviewed anthropologists, psychiatrists, nurses, patients and affected community members to understand the common emotional denominator. Eventually, I used Lakhey, a demon god from Nepal’s (Newari) mythology as a symbolic anthropomorphic form to create a hyper-real imaginary space. In written references, ‘Lakhey wears a huge red, terrifying mask with prominent eyes, protruding fangs, serrated teeth; a dark red wig and disheveled red tresses complete the awe-inspiring countenance of the man-eating demon as he dances and thrashes his limbs. It is believed that the spirit of the Lakhey resides in the demonic mask. As the performer puts the mask on, the spirit takes over’.

In my depicted version, he acquires the symbol of fear and violence. The red from his mask, hair and clothes translates landscapes, rivers and even faces into playgrounds of traumatic flashbacks.

I subvert the dominant narrative. People are seen sleeping, when in fact they were struggling to sleep. In the series, people simulated this peaceful act of sleeping, but once they descended into sleep-mode, Lakhey emerged. The red tone from his mask drenches the landscapes and eventually seeps into people’s psyche –– triggering the mind’s sinking into that bottomless chasm of fear and trauma.

Psychotherapist Carl G. Jung in ‘Psychology of the Unconscious’ spoke of symbolism and mythology as ‘the natural languages of the unconscious’*7.

By exploring an alternative approach to iconographies emerging out of Christian art, the series roots the tragedy in South Asian folklore without letting descriptive images further corrupt our collective memory.

Sharbendu De is a visual storyteller, writer and academic who uses photography as his core medium of engagement. Through his work, he is exploring a contemporary visual language rather than regurgitating descriptive metonyms. He did his MA Photojournalism from the University of Westminster (2010), PG Diploma in Journalism from Indian Institute of Mass Communication (2004), New Delhi, and has been teaching photojournalism at Jamia Millia Islamia University (2012-present) in New Delhi, along side his personal practice.

Home, by Sathish Kumar
2018 Award Finalist: Ebbing away of Identity with the Tides, by Sushavan Nandy
Enrico Fabian, Phas Gaya – Being Stuck