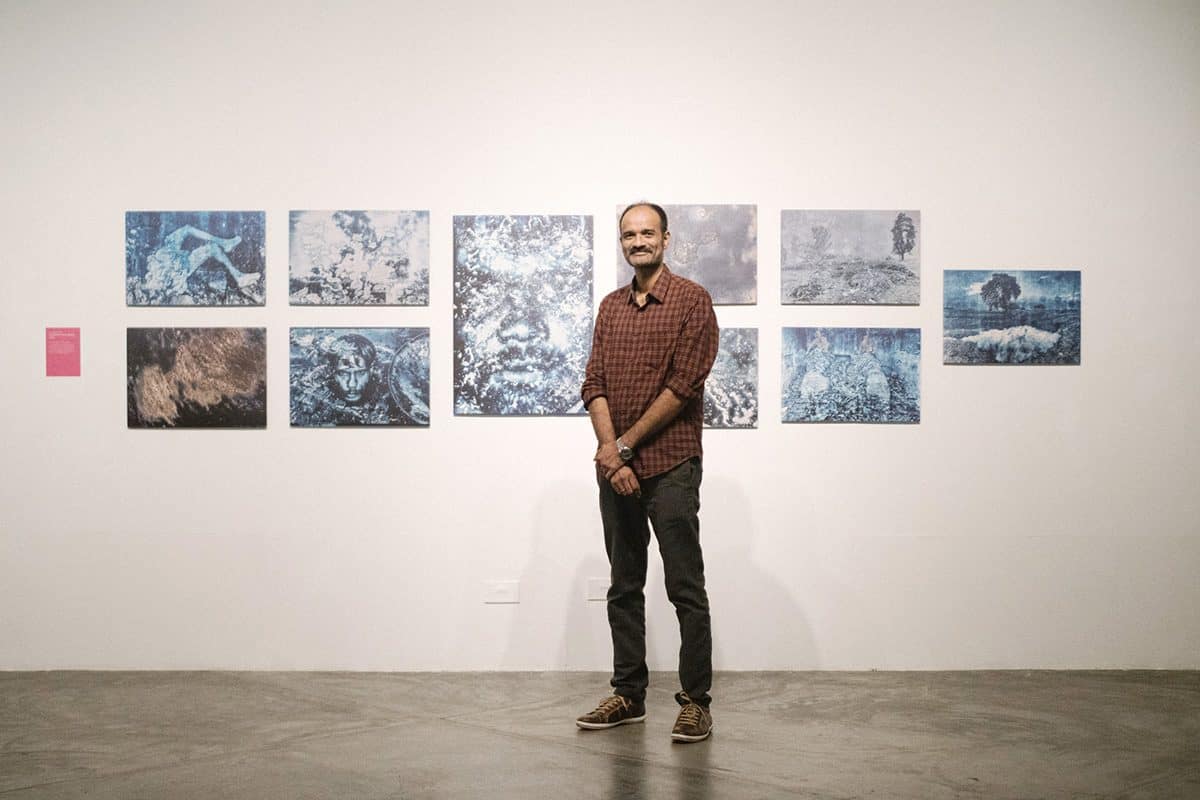 An exclusive interview with Indian photographer Harikrishna Katragadda on winning the Art Award in the Invisible Photographer Asia Awards 2018 and extending the materiality and dimensionality of photography.

I was doing a PhD in Physics in India. It was at the Astrophysics Institute. We had a darkroom and got to photograph the moon, stars and constellations. I got interested in the darkroom aspects of photography, and then I started doing street photography and documentary photography – documenting the struggle of people displaced by large dams in India. Eventually I realised I didn’t want to be an academic. I quit my PhD and got full-time into photography.

Since I started my photography in the darkroom, I spent a lot of time working with materials, chemicals and kinds of films. This was really the starting point for me in photography. And then digital came and I completely turned into computers and photoshop. But eventually I wanted to get back to my roots in photography, that was how I got excited about it. A lot of alternative photography methods which a lot of people are now getting interested in I wanted to use to document issues which concern me. And Ganges is one of the most holy rivers in India and also ironically one of the most polluted rivers in India. It has been documented by a lot of photographers in the traditional photojournalistic way or in the documentary form. I thought there’s another way of doing it based on my experience.

I’ve been going to Varanasi for more than ten years now. It’s a site of Hindu pilgrimage and there you can see the contamination of the river from the city. It’s ironical that people pray and at the same time they pollute it. So I wanted to use the cyanotype method to document the pollution on the photographic print. It’s like how contaminants go into our skin and affect our bodies, I wanted the contaminants to go and affect the photographic surface. This process allowed me to do it. It was totally experimental. I did not expect anything. It was just something which I wanted to try. I learnt the cyanotype process but I wanted to experiment with the glitches. Basically this is a glitch in the actual process. It was a happy accident let’s say. I worked on a river in Bombay, again a very polluted river called Mithi River, and then I used those ideas to work on the Ganges River.

I started as a documentary photographer with traditional ideas of photography. Now I’m more interested in extending the form of traditional photography into more ways of looking at images – the materiality of images, how to extend the two dimensionality of images into other dimensions, like three dimensions, like sculptures for example. I work with my wife on images going beyond the traditional documentary form. It involves embroidery, sewing, painting, drawing on the images, and of course distressing images and tearing, whatever, it’s just working with images for me, not just the idea of a pure photograph.

This approach to photography where we incorporate materials and things more than traditional photography is pretty exciting because I can get influences from film, literature, poetry, and music. I mean the potential of an image increases rapidly. It’s much more potent to incorporate other fields. For me its a very fertile ground to work with. My advice (to young photographers) would be to read literature. I think there are some great ideas from literature. Watch great world cinema. And look at art. I’m inspired by a lot of contemporary art. Extending traditional photography into more ways of looking at it is very important for me so that’s one way of going about it.

I saw the finalists in all categories and they’re absolutely amazing. It’s an honour to be part of this awards. I’m also really excited that they (judges) recognise this work which is not traditional documentary photography or traditional way of looking at a photograph.

This work (You Can’t Step Into The Same River Twice) was started because I got a grant from India Habitat Centre. They had an award called Habitat Photosphere award so the grant gave me money to make this work. And secondly, my wife who has supported me and believed in my work. I really thank them.

Harikrishna Katragadda graduated with a Masters degree from the University of Texas at Austin and started his career as a photojournalist in New Delhi. He has travelled extensively in India to work on environmental sustainability and human rights issues. He has received the India Habitat Centre Photosphere grant, the Media Foundation for India prize and the National Foundation for India fellowship.

You Can’t Step Into The Same River Twice, by Harikrishna Katragadda (India) is the Art Award Winner in the Invisible Photographer Asia Awards 2018.