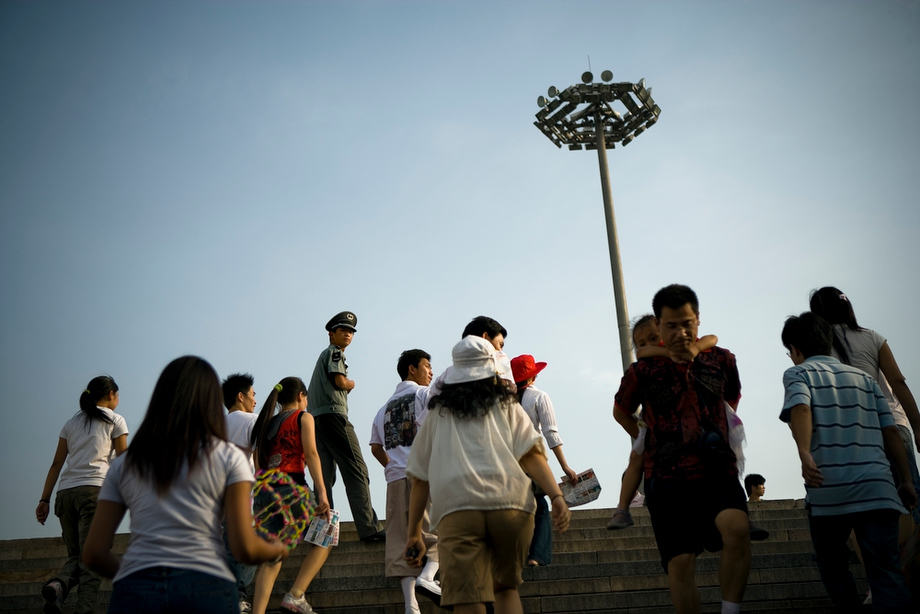 Born in Taipei and raised in Hong Kong, Thomas Lee now meanders between East and West working as a photojournalist, artist and filmmaker-photographer in New York and Hong Kong.

Thomas’s work has won awards and seen publication by the likes of Time Magazine, The New York Times, Rolling Stone Magazine, and The Guardian amongst others.

In this exclusive Invisible Interview, Thomas reveals a bit more about himself, being a journartist as he calls it, and his aspirations “to distill the abstract and the sublime from reality, to create works that blur the line between reportage and fiction.”

Invisible Ph t grapher Asia: Can you tell us about yourself and how you got into photography?

Thomas Lee: It was my love for cinema that got me into photography. The first artists I idolized weren’t photographers but film directors like Stanley Kubrick, Krzysztof Kieślowski, Wong Kar Wai. I went to the USA and majored in Film at Northwestern. But that overarching passion, I later realized, should read visual narrative; film was merely one of its expressions.

As I dug deeper into filmmaking and grew weary of its dependence on production and resources, photography, a freer, more intimate and immediate tool in contrast, became my quick fix: I joined the school newspaper as a staff photographer; I took up a second major in Art and delved in fine art photography. Soon Sally Mann, Joel-Peter Witkin, Irving Penn, Gregory Crewdson, Shirin Neshat, Sebastião Salgado, James Nachtwey became my heroes and heroines.

Towards my senior year as my classmates prepared for their graduation films, I traveled to northern Uganda and shot my first series of documentary/fine art photo projects in the war-torn region. Photography took hold of me, especially with its documentary arms — the inherent spirit to affect social change. I graduated in 2006 and followed a NGO to Afghanistan that summer, which cemented my professional pursuit in photography. I then moved to New York, interned and worked at VII Photo Agency. I began freelancing in 2007 and have since called myself a photographer.

Can you tell us what cameras and tools you use to photograph and why you use them? Digital or Film?

My professional camera is the Canon 5D Mark II. Film pushed me toward photography, and now this digital SLR shoots cinematic footage! It completed a circle for me; I’ve made several video shorts with it already. I walk around with the Panasonic GF1 and enjoy its lightweight versatility. I had the Mamiya 7II for a while but found the medium format processing and scanning too costly, so I let it go.

It appears your lens of choice is a wide-angle?

I don’t have a favorite lens. I switch lenses routinely while shooting. I think my photos appear “wide” because of my film influence: I tend to photograph with a cinematic eye. I’m drawn to contextual shapes and details. I respond to scenes. That sense of “everything together” gives my photos a wide impression.

There’s the trait to capture a photo as if it’s a scene from a movie, as mentioned above. But it gets repetitive quickly, so I’m also conscious to break away from it. I’d set rules for myself: “obscure any faces throughout the story” or “make the subject blurry but still direct focus to it.”

Tell us about your experience in Afghanistan and photographing your  Afghanistan: War Beyond series.

I went to Afghanistan with a Chicago-based NGO called Arzu who helped Afghan women weavers source and sell their rugs as means to empower them. So throughout the trip — visiting and documenting different villages and project sites in Kabul and Bamiyan — I saw this dichotomy: one minute you met joyous, hopeful Afghans, the next you found a bombed truck, or a burnt out Soviet tank, or a wall covered in bullet holes. I began juxtaposing the full-of-life moments with the war remnants, which resulted in War Beyond.

Your Toll Of Tuna project is unique and insightful. How did that come about?

You’re kind. I showed my portfolio to TIME as I re-based from New York to Hong Kong in 2009. Later they assigned me to go to General Santos, the tuna capital of the Philippines, to photograph signs of overfishing and how it’s affected the lives of local fishermen. It’s in essence an environmental piece. My first.

You’ve garnered quite a few awards and recognition for your work. What do these awards mean to you as a documentary photographer?

They used to have more weight, when I was starting out, green and anxious, seeking validations, entering multiple competitions. Then the ego trip wound down. I still enter contests, but as an exercise to review the year’s works by myself and others in the field. A win would be a pat on the shoulder, and about just as light.

As stated in my bio, I aspire to “distill the abstract and the sublime from reality, to create works that blur the line between reportage and fiction.” To me, photos from the two series Special Surveillance Zone and The Olympic Eyes are so far the closest to that motto. I feel that the photos are social/political documentary, targeting a real issue, but together they construct this surreal dystopia and articulate an absurdity that’s hard to pinpoint in reality. Well that, and also because the series were collaborations with renowned activist and writer Naomi Klein. That made it extra special.

Are there any other place or people you would like to photograph?

Too many. The list grows constantly. My favorite discovery this year is Lieko Shiga. Her Canary series is deeply inspiring. Paolo Pellegrin and Antonin Kratochvil are good reminders of how perfect imperfections can be. Ryan McGinley is often brilliant. Recently I was inspired by the works of Ning Zhouhao, Wei Bi and Wu Tien-Chang at the Hong Kong Photo Festival 2010.

In 2000, before photography was even a hobby, I traveled to Kathmandu and took a snap of a Nepali girl with my point and shoot: she wore a pink dress, golden earrings, and from her angelic face I captured this mature, intense gaze. That photo essentially placed photography in my life. I’d try to locate that girl and made a portrait of her with my last ever frame.

To the future when Earth begins space-shipping colonizers to Mars (fingers crossed).

Plans are in place to shoot photo and video projects for my friend’s media campaign to empower vulnerable women in China, called Half The Sky.