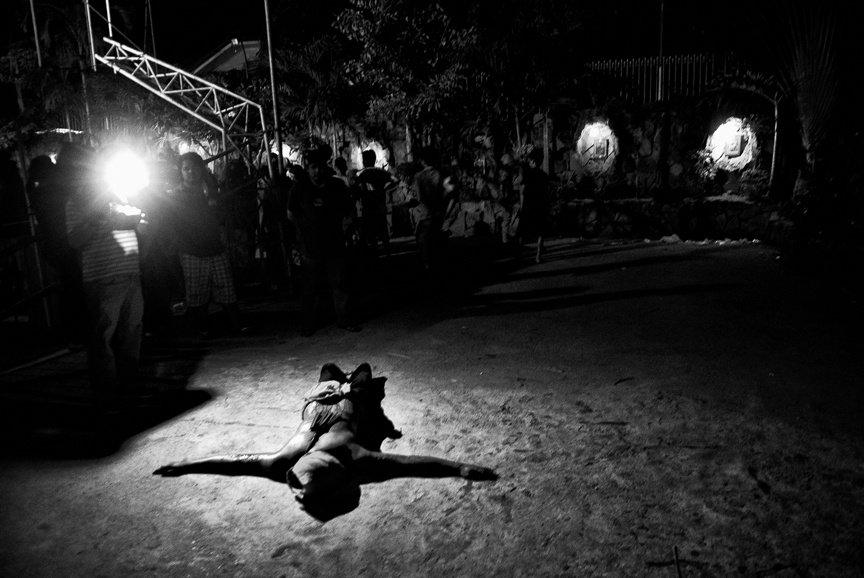 The Philippines has the biggest Catholic population in the Far East. In the year 2000, there were an estimated 45,000 religious sects registered as church congregations in the country. The vast majority are Catholic devotees; a large number also come from the broader Christian community.

Faith has always played a major role in a Filipino’s daily life. It’s traced back to the arrival of the Spaniards in the 1500’s where they used religion to communicate with locals. And centuries later, the modern day Filipino used his or her faith to oust a dictator by rallying in the streets with rosaries in hand and whispering prayers.

Today, Filipinos still lift everything on the ‘divine’. May it be a result of an examination, daily grace, or resuscitation of life, it is all prayed upon. The religious iconography mish mashed with animism is what sets Filipino faith apart from the region.

Being born and raised in a devout Catholic family, this project is an introspective narration of how the different influences merge into today’s modernity.

This essay reflects how Filipinos devote themselves to their religion – be it a procession of half a million bare footed devotees in downtown Manila, a concoction of crushed human bones and herbs to relinquish harmful spells, or a pilgrimage up a mountain on their knees to profess a long time devotion to prayer and the rosary.

As any religion goes, devotees and believers revere such practices and consider them their saving grace, may it be faith or fanaticism.

Invisible Ph t grapher Asia: How did you start in photography? What got you interested? Your first camera, your first subjects?

Veejay Villafranca: I grew up in an environment where information was important. Since we lived in a small place, I would see my dad wake up early getting ready for work while the 5am news was on and the morning paper on the table. Years later little did I know that I would inherit my grandfather’s knack for news and my dad’s incessant desire attitude towards photography. During my sophomore year in my undergrad course, I was offered a job to cover former President Arroyo for the Philippine Graphic magazine. 6 months later they offered me a staffer’s post then the rest is history.

I think what got me interested is the continuous search for stories and also the challenge of being able to create images that would tell the story of the subjects.

My first camera, Nikon F with a 50mm f1.4 lens. My first subjects (when I started getting into photography but before I worked professionally) the streets of downtown Manila as this was my Dad’s favorite place and he would always bring me along to walk along Quiapo and Carriedo and then have lunch Chinatown.

What are the workshops, internships or assignments that you took in the past that were helpful in your education?

The Angkor Photo Festival workshop in Cambodia was the first documentary workshop I ever attended and it was helpful in a way that even in a short amount of time and even with a language barrier (as our mentors were both French) I learned the basics of putting together a story, my first hand experience of fusing together journalism and photography.

Then I was fortunate to be given a full scholarship in Asian Center for Journalism’s Photojournalism program here in Manila. This course motivated me to pursue documentary photography more because of the mentors and also the program’s thrust that nobody could tell a better story about your own country but yourself (but of course one needs to be learned in both disciplines before he/she could even start doing it professionally).

What was the best lesson you learned?

That what I read in the news isn’t always correct and images can be misleading as well.

What was your biggest break in your career?

When I won the Ian Parry grant in London in 2008. This opened a lot of opportunities afterwards.

Who are your influences?

Apart from Filipino photographers that has been at it for over three decades now, i usually draw inspiration from the experiences of other people, everyday people.

What are some of your favorite works of other photographers?

The known one’s would be Smith’s Country Doctor, Koudelka’s gypsy project, Eugene Richard’s Knife and Gun Club and Cocaine Blue, amongst others but what inspire me more are the works of Filipino documentary photographers who are not known to the world but has greatly influenced me in my early years as a photographer.

Do you prefer film and digital?

Neither as long as i can record on  it then i’m fine.

What is your definition of documentary photography?

Sequence of images that has been produced through the guidance of the subject’s story.

Tell us about Faith Above Fate and how has the work evolve into what it is now?

My current project on Filipino Faith started with a personal question, where does my own faith lay? Then it became a journey through different practices from fiestas to rituals to devotees to healing. Now it has evolved into a study about the Filipino’s undying devotion to faith and how he/she holds on to the divine in times of dire need or just any other day.

What were the challenges faced in making the work and how were they addressed?

The main challenge was how to illustrate the relationship of man and the divine without sensationalizing the subjects or making them look odd.

What is the work about? What concerns, ideas, and/or curiosities does the work reveal?

It’s about human relationships, between humans and how they turn to the divine for help when the bond between man cannot suffice. It’s actually fairly simple and it’s part of everyday life. What’s complex is why they differ and why one chooses a different practice over the other. It is their right of course, I just want to show how it has evolved from olden beliefs up to the age where some people don’t even believe in what they can actually see.

What would you like the viewer to understand about the work?

It’s more of an illustrative project on faith practices. It doesn’t aim to preach nor expose. I just want to show the different intesities of faith on Filipinos and maybe even why it has resulted to this.

Which of your projects took the longest to complete and why?

The Gangs of Baseco project, though it’s still far from complete it took a while to be able to get access to the key people I wanted to interview.

Whenever I would visit the compound yes I still look for them. A lot of them has changed, the children grew fast. The gang members mostly are away working.

What do they think of your work?

They thought it was cool that their images were shown in another country. Then they asked a pack of cigarettes and a bottle of soda.

Has your work been successful in delivering a message or was a cause for change?

No. But I think I was able to create a venue for a dialogue through the images I produced in Baseco.

What advice can you give to young photographers?

Respect your subjects no matter who they are. Never publish a story that is out of context. Think less of photography and more of the story.

I have a habit of taking images using windows to frame whatever is outside. So yeah, maybe that. Or something really cheesy.

I’d love to travel back to the day when the Spaniards first landed in the Philippines and to witness how that whole era has influenced who we are now.