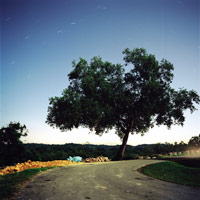 “Photography deals exquisitely with appearances, but nothing is what it appears to be.” – Duane Michals

I started photography at a local newspaper where I was taught to embrace objectivity and to leave my feelings aside while photographing.

Being older and wiser now, I have come to the realization that life is not always so straightforward. Much of the photography that I practice today no longer requires me to be “objective” in any way. And it was only recently that I began to admit that the possibilities of photography were far greater than I had allowed myself to imagine. In many ways, the photographs in this book are a direct result of that admission.

The images in this book began their journey to life on a night in June 2002. Suffering from insomnia, I decided to make the best out of the fact that I was awake when almost everyone else was asleep. I took long drives and stopped to photograph whatever I felt could be visually interesting.

My first steps were tentative, with no theme or specific subject matter whatsoever. My approach was decidedly “un-journalistic” insofar as there was neither a “story” I was trying to tell nor a particular message I was trying to convey. It was driven instead by how I felt about the particular place I had chanced upon.

Many sleepless nights ensued once the project took on its initial shape but it wasn’t till a year later that I actually knew what it was that I wanted to attempt to record on film.

Many of the locations in this book are places any Singaporean would not take a second glance at should he or she pass them by in the day. Come nightfall, however, the light recedes and shadows take over. Familiarity fades into obscurity and the very same places we know so well begin to take on a foreign and almost alien visage.

The unfamiliarity of the familiar fascinated me and this was the Singapore that I wanted to portray: a Singapore that in some ways is there for all to see yet cannot really be seen without my actions of photography. Through long exposures and film’s unpredictable chemical reactions to ambient lighting at night, I brought to life a Singapore of which amorphous hints previously only existed in my mind.

The photographic acts I embarked upon were thus deliberate and highly “subjective”.

For me, making these images was a road to discovery. Every night that I was out and about, I found out something new – about photography, about the landscape before me or simply about myself. Each frame I made contained a surprise, as I had no way of knowing exactly how the nightscape that presented itself would appear recorded on film. The late Garry Winogrand once said that he photographed “to find out what something will look like photographed” and it was with his words in mind that I revelled in the measured doses of my insomniac experimentations.

It has been two years since I first took my camera and tripod out for those long nocturnal drives of discovery and still I cannot be sure of what to expect when I start to expose that frame of film to the night.

That, to me, is the only reason I need to continue photographing.