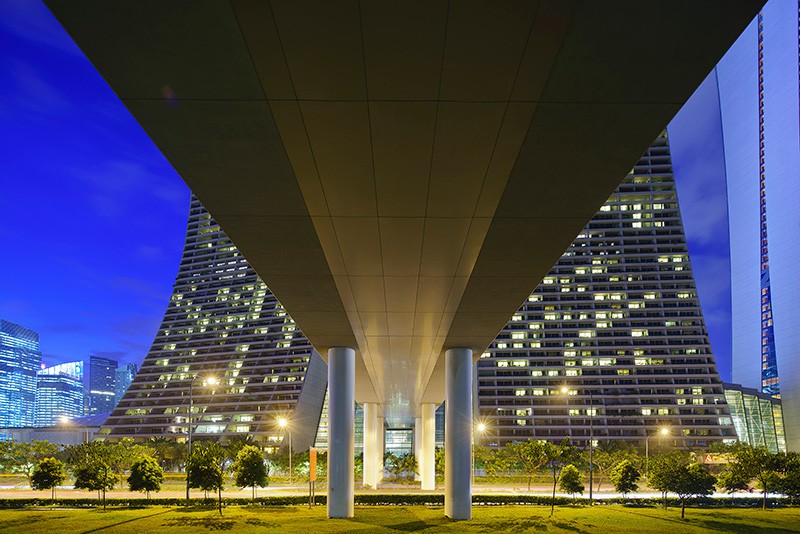 A Look at the Sony Alpha A7R Camera

For those of you familiar with my work, you’ll know that I’m primarily an architecture and landscape photographer. A large amount of my work is made on the 17mm Tilt Shift lens, which only Canon makes.

Unfortunately, to date, my choice of equipment has really been limited by the sensors that Canon makes for its cameras and I’ve used a 5D Mk III since its launch in early 2012. While the 5DIII is an amazing camera in its own right, the quality of the files really falls short of files from the Nikon D800E for example. Alas, there is no way to adapt the Canon 17mm Tilt Shift lens on a Nikon camera because of the physical limitations of the lens mounts.

So imagine how excited I was when the Sony A7R was announced and some background checks revealed that theoretically, the Canon 17mm could be mounted on the camera that had a full frame 36 megapixel sensor with no Anti-Aliasing filter. I am happy to report after two weeks of owning the A7R, that both the Canon 17mm and 24mm TSE lenses have performed amazingly on the A7R coupled with the Metabones EOS to E Mount Adapter (Version III).

In the two weeks that past, I’ve become quite comfortable with the Sony A7R and when used properly, the results are nothing short of spectacular.

For those who have wondered whether this combination would work for a working photographer like myself, I’m going to share how the A7R blows away any of Canon’s offerings at the moment, and what you should really do to get the best out of the A7R’s files. Here are some tips and quirks of the A7R that you should be aware of.

Forget about the JPEGs, shoot RAW.

Sony applies really aggressive denoising and lossy processing for its in-camera JPEGs, even when long exposure and high ISO noise reduction to set to the minimum. Judging the camera based on the JPEGs it produces is like buying a super car and never driving past 80kmh. The RAW files (when opened with Adobe RAW and noise reduction turned off) reveal an amazing amount of detail and really really showed what the Canon 17mm and 24mm TSE lenses were capable of resolving.

By default, noise reduction is applied even to the RAW files from the A7R, but the good news is this can be completely turned off. The problem with Sony Image Data Converter is that the Mac OS version which I used for awhile is extremely buggy and crashes frequently. The great news is that the final version of Adobe Lightroom 5.3 has just been released and this supports the A7R RAW files.

The Sony A7R comes with both Focus Peaking and Focus Magnification. These aids can be used when the camera is mounted with manual focus lenses such as the Canon 17mm and 24mm TSE lenses. I’ve realised that with a 36 megapixel sensor, any focusing inaccuracies due to user error become really really obvious. For the first couple of days, I thought there was something wrong with the camera lens combination because I kept getting soft images and only after I started to diligently use Focus Magnification on all my shots that I began to see how much my lenses could resolve on the A7R.

A true optical viewfinder is still superior to the A7R’s EVF.

The A7R has a really decent EVF, but after extended use, I’ve found that it really strains my eyes and still doesn’t come quite close to what a “true” optical finder on my DSLRs can offer. Funnily, the EVF on the Olympus Pen E-P5 seems to be superior to the one on the A7R and I’ve found the former a joy to use. Oh well, no such thing as a free lunch I suppose.

Use the built-in electronic leveler in the A7R but beware.

Unfortunately I’ve come to realise that the electronic leveler in the A7R isn’t the most accurate. I’ve used electronic levelers on several cameras from Canon, Nikon, Olympus and now Sony and I have to say that the Canon version is still the most reliable. Coupled with the EVF that can be hard to use at times, this makes keeping your camera level a more daunting task than on a Canon I have to say. This is probably my biggest gripe with the A7R.

Be selective about the glass you put in front of the A7R.

Because the A7R is a mirrorless camera, your choice of lenses (with the right adapter) is really limitless. Of course, there will be clowns who put really old crappy legacy manual focus lenses on the A7R and then complain that the image quality is bad. Duh. What did you expect? I’ve found that even on a relatively modern lens like the Canon 45mm TSE, the quality is acceptable at best and nowhere near stellar. At the same time, I’ve also happily realised that the Canon 17mm and 24mm TSE lenses were probably over-engineered and “future-proofed” by Canon for whatever high megapixel offerings they may or may not have in the pipeline because they perform really well.

I’m including several images here from the A7R made with my array of tilt shift lenses. Most are with the Canon 17mm or 24mm TSE lenses but a couple are made with an old PC-Nikkor 35mm mounted on a Novoflex F to E mount adapter. One image is even made on a Leica M Summarit 50mm, which I am happy to say is also amazingly future-proof. All are real-world examples of images I’d have to make for work and I cannot be happier with what I’ve managed to achieve.

All in all, I’m really happy with what the makers of the Walkman have managed to come up with, who’d have thought they would become a pioneer in the field of camera manufacturing eh?