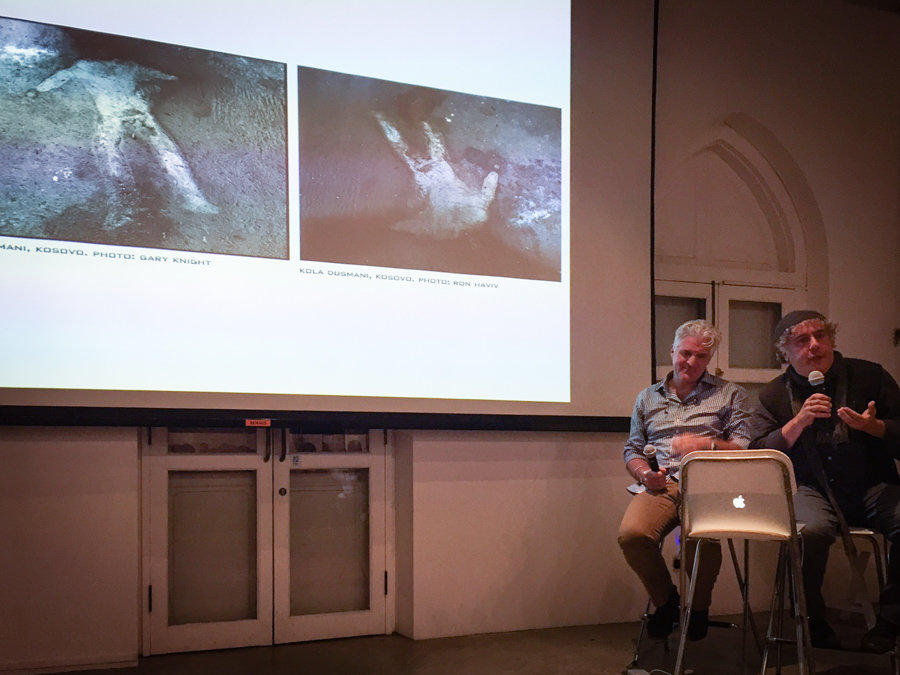 A candid public lecture on Conflict Photography and the beginnings of VII Photo Agency by co-founders and photojournalists Gary Knight and Ron Haviv was held at Objectifs – Centre for Photography and Film on 8 October, 2016. The following is a transcript of the question and answer session with the audience.

HOW HAS BEING HELD AT GUNPOINT INFLUENCED YOU?

Ron: There have been many obstacles for those of us who chose to document conflicts. Things have gotten much harder in the last couple of years, especially for those working in the Middle East. For myself, there were obstacles that motivated me to work harder. I wanted to tell the story but these are personal issues. Some made the decision that the danger was too great and shifted their attention elsewhere. There are local photographers now, Syrians and Egyptians, who are putting their lives in danger everyday for us to see what’s going on. It’s important that we notice and see what they are doing.

Gary: If I were to categorise my friends, most are fairly contrarian, anti-establishment people. The worst thing you can do is to tell them they can’t do something and try to stop them. Like doing that to children…

Gary: No, it’s like don’t grow up. Don’t do that or we’re going to arrest you just increases the challenge.

HOW MUCH DO YOU FEEL YOU CAN INFLUENCE THE OUTCOME OF A WAR?

Gary: Nick Ut who took the photo was embedded with the South Vietnamese forces. Robert Capa was embedded during Normandy. If you go photograph a war, whatever anybody says or labels it, you’re there because some military unit is allowing your presence. The trick is, of course, to maintain your independence and integrity. And photograph the way you need to to tell your story. I think it is possible to change politics. It is possible to change the world with photography. I don’t think Nick’s picture changed the outcome of the Vietnam War. But Nick’s picture and everybody else’s pictures, the writers, the television and the protesters back home etc all combined, probably changed the outcome of the war. I think for us, we recognize we are a small part of a big and complex process, all of which are necessary. Sometimes it feels that we are not having much individual success in changing things because you wake up the next day and something else dreadful is taking place. It’s important that we try. Sometimes it feels like you are climbing a mountain but it’s worth trying. If you are not going to try, what are you going to do?

Ron: We get this question a lot of the time. If you can’t stop the war, why do you do it? It’s not all in or nothing. Having this ability for our work to, at some point, affect somebody to do something, to be educated and have action that can affect one person outside of their family, for me, is already a success. My photographs in Darfur which raised awareness of the genocide, affected people to give money, to write to their Congressmen in America to try to affect not so specifically the girl in the photograph but the people in Darfur. That, for me, is success. But I only noticed that after many years of doing this and talking to people affected by work and listening to their stories. In the beginning, it was like, Oh My God, no one is paying attention and there’s no point. That was and is a problem but photography has this ability to move on and impact.

WHAT IS THE RELEVANCY OF STILL PHOTOGRAPHS AND WILL IT PLAY SECOND FIDDLE TO VIDEO?

Ron: Video is a great way to tell a story but it’s often the still image that crystallizes. There will always be a place for stills. All of you, whether professional or not, have a camera in your pocket and can take photographs. Yes, you can take videos but most are taking and uploading stills. Thus more and more people are having relationships with photography.

Gary: Still photography may have lost or maybe losing its place as the first source of delivery, in the same way radio or television might have lost their place in some countries. Or poetry which was how we understood World War I. But still images are still what many of us recall. They will have a different and evolving function, though not for daily news. The challenge is how to tell a story in the best way. If you can tell a story in a meaningful and powerful way, people will attract or attention themselves.

WITH REFERENCE TO THE KEVIN CARTER CONTROVERSY, HOW DO YOU BRIDGE THE GAP OF BEING A PHOTOGRAPHER AND A HUMAN BEING?

Gary: We knew Kevin. Kevin didn’t kill himself over that picture. The picture merely amplified the problems Kevin had. The truth is Kevin knew what happened to the boy. The vulture was quite far from the boy and the boy was in a place which was surrounded by a hundred and fifty women. He was in a feeding station. It was the way the picture was taken.

So the question is what you do when confronted with such a situation. Kevin didn’t need to rush to help the boy since his mother was there in a Red Cross camp. For such stories, we’re there with armies or the UN and the last thing we want to do is to pick up a child. You might remove the child from his mother or intervene in a way that is harmful and dangerous.

If you were the only person on Earth who can help a person, God help them frankly. We are not trained medical practitioners. Of course we would help. I don’t think I’ve ever been in a situation where I felt I needed to intervene. There were plenty of other people.

Ron: It’s a personal decision of what you do and when do you do it. There’ve been times when my presence as a white man with a camera has stopped someone from being beaten up. Other times they don’t care and put a gun to my head. These are very difficult moment to moment situations where your presence there as a witness is irrelevant. You have to decide whether you want to stop something. There were times when I felt I couldn’t stop someone from being executed but I had to try to document that moment. My personal belief in such situations is I’m a human being first and a photographer second. If I’m the only one there and I could do something to help without getting killed, I will do so. If there’s anybody else there, a doctor or a nurse, then I take my responsibility very seriously and that I’m there to document.

AS A CONFLICT PHOTOGRAPHER FOR SEVERAL DECADES, HOW DO YOU HANDLE YOUR EMOTIONS?

Gary: A lot of people ask that question. It’s really hard to answer the question, to be honest. I’m very candid about the fact that I had PTSD. I live with that and that is the price I paid for choosing this career. I chose it and I won’t blame anybody else. I think one of the other answer I’ve given is I think I’m well motivated in this career. I was trying to do the right thing. I don’t think I always do the right thing but I tried to the best of my ability. It makes me feel my presence in these places had value to the people I was photographing. It heals a little. You can’t work in places like these and not walk away without any pain. We’re happy to answer these questions but it’s really about the work and what we want you to think about.

Ron:  I wasn’t there just for my career. The fact I was there to help people really help rationalise my presence and accept what I’ve seen. Having suffered PTSD as well, I understand this was a choice I made. People whose situation we’ve shown in the photographs had the situation thrust upon them. Hence our role is very important and make you understand a little better. There are risks that we take.

IF YOU COULD BE REMEMBERED FOR ONE PHOTOGRAPH, WHAT WOULD IT BE? AND WHY?

Ron: It’s difficult. Whether it’s a body of work or a single image, i hope that in my obituary, which Gary will write that this work has succeeded. (Audience laughs) That is the goal for many of us.

Gary: It is a reasonable question but an impossible one to answer. Ron’s work from Bosnia, for me, maybe the most important work he ever produced. An undeniable testimony of the Serbs committing war crimes. I think it’s still very valuable. About my work, I don’t know. I have no idea.

VII STARTED AS A PHOTOJOURNALISM AGENCY. RECENTLY YOUR MENTORSHIP PROGRAM SAW THE LIKES OF SARKER (PROTICK) WHO ARE CUT FROM A DIFFERENT CLOTH. CAN YOU TELL US MORE ABOUT THE MOTIVATIONS AND THE CHOICES ABOUT THIS CHANGE?

Gary: It will be a very dull library if it’s the same book replicated over and over again. I don’t think the original VII members were replicates but we did work in a very different space. It was a space where the world was just coming out of the Cold War. The agency wasn’t curated to be that way. We were just great friends who trusted each other. We knew we could build an agency around those seven members. We didn’t self identify at that time as war photographers. We ended up launching the agency at the beginning of a new war.

We recognize that the world is a very big place and needs to be represented in a much fairer way. There are imbalances in our agency and we are trying to now bring in young photographers from different parts of the world with different worldviews; who are informed by different things, different generation to add to what we do and to make the agency broader and it’s representation of the world fairer and more complete and complex.