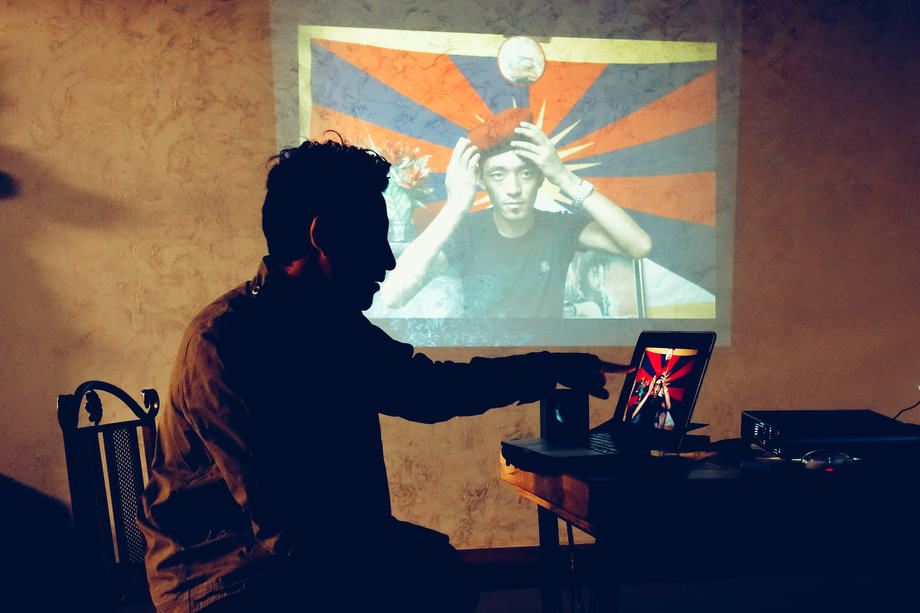 Tsering Topgyal at his artist talk presenting ‘Tibetans in Exile’.

We recently caught up with Delhi-based Tibetan photojournalist Tsering Topgyal in Korea where he exhibited his portrait project Tibetans in Exile at the Suwon International Photo Festival.

Tsering Topgyal was born in Tibet but has grown up in exile in India since he was 8 years old. Tsering now works as an AP photojournalist in New Delhi. His new self-initiated long-term project features portraits of other young Tibetans like himself, living in exile, and separated from home and family.

Let’s start with a quick introduction.

I was born in Tibet. When I was 8–9 years old I came into exile. Ever since then I have been living in India. My photo project is a personal story, a long term project, about Tibetans who came into exile and haven’t seen their parents in years. I came to India in 1996 and I haven’t seen my parents in almost twenty years. There are many Tibetans who share the same story. It’s about trying to understanding myself and my relationship with the family that I have and other Tibetans like me.

How did you leave Tibet and come into exile by yourself? Tell us about that story.

Well, my cousins were in India. They went much before me. My parents decided to send me too. In India we have more opportunities and better education.

Why didn’t they come to India as well?

They tried but it is difficult. Like many Tibetans try, some manage some don’t. At the borders or the mountainside, they are caught and sent back to prison for several months. My brother tried a couple of times. And Tibetans who have monks in the family do not get passports, Chinese passports.

Tell us about your history with photography, how did you get started?

When I was in class 7 in school they started a photography club where they would pick one person from each class to join. At first I wanted to join the music program, but I wasn’t selected by the teacher. But luckily I was picked for photography. After college, I interned with AP. After that I worked with them as a stringer. Now I’m working with them full-time.

How did ‘Tibetans in Exile’ start? And tell us about the first images you made.

The subjects that I chose were all from the same school. We were all friends so I know them personally, or I knew them through friends of friends. Many of them don’t want to be photographed because they have family back in Tibet and don’t want any problems for them. When I started the photo essay I wanted to keep it more personal, but I thought this was a wider story so I included other people.

You said some didn’t want to be photographed, but the ones that you did photograph – why did they decide to participate and show themselves?

Some of them don’t have connections with family. Some don’t want to be photographed because they want to go back to Tibet. Some want to just stay in exile. The guy in that photo with the shadows showing only his back – his family is in Lhasa, a highly sensitive and censored place. He didn’t want to show his face but wanted to share his story.

Your photos contemplate identity. What does it mean to you personally – being Tibetan, in exile, in India?

In one way it is like a blessing in disguise being in exile. Before 1960s we were removed from the rest of the world due to political reasons. But now in exile, it is like a coin with both sides. Basically the Tibetans who came in the 1960s were not educated. Now the Tibetans who are born or brought up in exile are highly educated and can express what they feel in film or any other visual arts form. In a way there is growth… I don’t quite know how to put it. Back in Tibet there is high economic growth but there are always restrictions. Many of us are able to communicate with our parents and family in Tibet. And we are used to this situation, especially me. I can communicate with my parents. I can phone them. But somehow because of time we have lost that connection. I mean sometimes you feel more closer to your friends than your parents. I know it is sad but…

So when you came to India at age 9 how did life unfold?

In India there are schools called TCV. Tibetan Children’s Villages schools. It was founded by Dalai Lama’s sister. Those who come from Tibet go there to study. It is more like a boarding school. Almost everyone has similar backgrounds. I was there till class 10. Then I went to another Tibetan school which was a few miles away from Dharmshala.

TCV is more than a school. It is more like home and family where you learn almost everything. There are like homes where we have a matron we call home mother. Everyone is considered brothers and sisters. The elder ones will wash the younger ones’ clothes and they will also cook. It is like a real home, but in a different way. 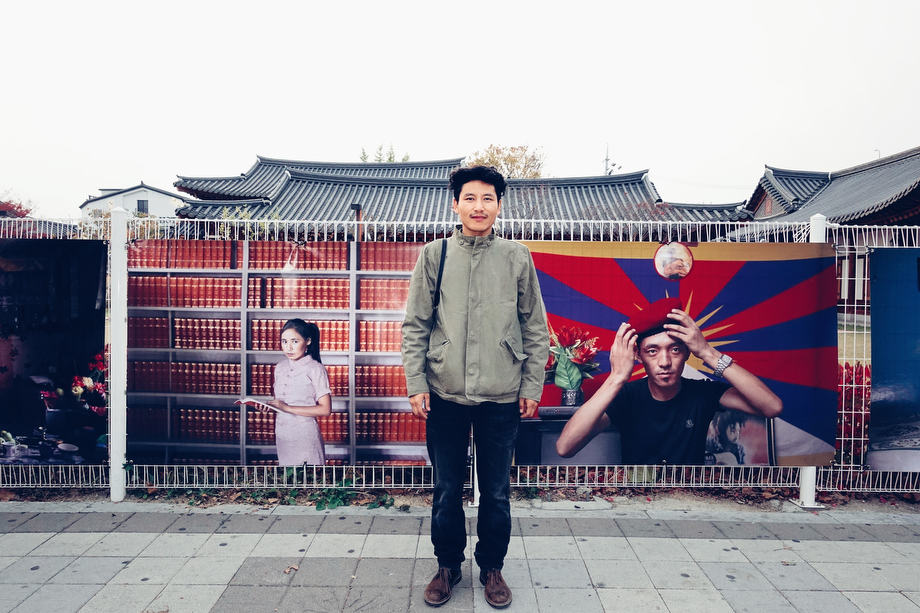 Tsering Topgyal at his ‘Tibetans in Exile’ exhibition at Suwon International Photo Festival.

Do you have any other direct relatives living in exile in India as well?

I have one cousin in India who is a monk. He came much later than me.

We have been having conversations since we met a few days ago. You told me about the complex process you went through to leaving the country and coming to Korea – the applications, approvals and documentations. Can you share a bit about that?

Actually for Tibetans, it is very difficult to get Visas. If I get a Visa, I also need an exit permit or a return visa. If I stay out of India for more than 15 days, I need an exit permit. That means I have to go to the Tibetan Welfare Office to get a letter and then go to a local Indian FRRO office. From there, they will give me a letter to take to a Police Station to get clearance. Then I go back to the FRRO office. It is a lengthy process.

Do you have any yearnings to go back to Tibet and be a photographer there?

I wish to go back but it is difficult and risky. I would like to document the fast changing Tibet which we don’t see much of.

Last question, what is your dream project?

Not really a dream, but I have one idea of photographing twins or brothers where one of them is in Tibet and the other is outside of Tibet. That would be really difficult because their identities will be known. Otherwise, It could be very interesting, maybe a collaboration with a Tibetan photographer in Tibet. Looking at the different ways of living their lives. The changes. If he was in Tibet he would be living this life, but now he is out of Tibet and living this other life. The idea sort of struck me when I saw my brother’s picture for the first time. He is much younger than me. But looking at my face and his face, I look much younger than him. That really struck me.

View more images from Tibetans in Exile on AP: www.apimages.com

Interview has been edited for length and clarity. 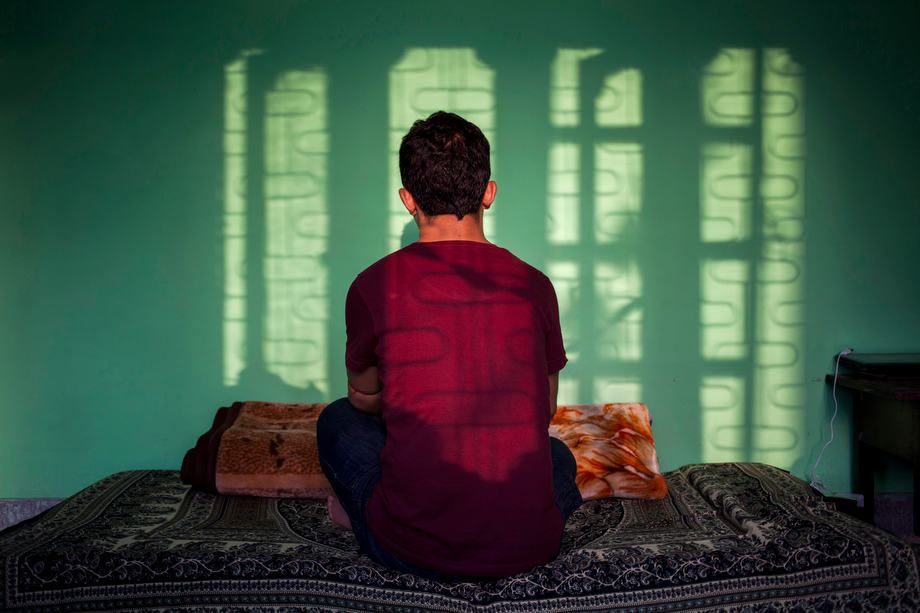