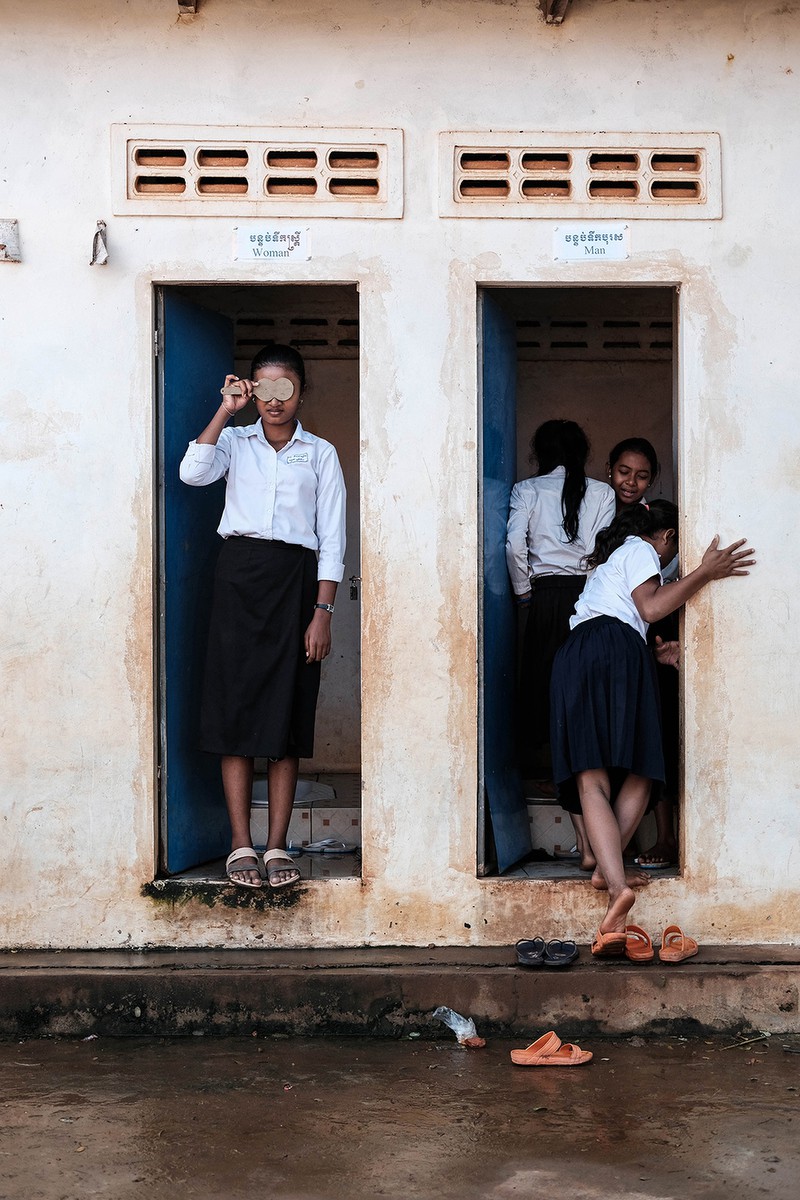 Rebecca Chew was a Malaysian recipient of the Angkor Photo Travel Grants. Two Eyes Good, Four Eyes Bad was made during the 2016 Angkor Photo Workshop in Siem Reap, Cambodia.

During the Khmer Rouge’s rule (1975 to 1979), people wearing eyeglasses were executed as intellectuals to be eradicated in the regime’s agrarian Utopia. They were among up to two million Cambodians killed.

For years after, eyeglasses were suspect.

Today, that stigma still holds for some of the older generation. But as Cambodia modernises, and healthcare and education spread, more rural children are getting the glasses they need — putting an end to one of the regime’s brutal legacies.

1. HOW DID YOU PREPARE FOR THE WORKSHOP?

This was my first ever photography workshop and I wasn’t sure what to expect. I knew I had to find a something to photograph—a story or an idea—and that pursuit kept me busy for months prior to my arrival in Siem Reap. But the more I read, the less certain I became. The pressing need for leads hung over my head like a cloud I couldn’t wave away. It didn’t help that research can only go so far; things change when you’re actually on location. I’ve been to Siem Reap a decade ago and understood how the photogenic assault of scenic poverty can be boring and disturbing. I would be lying to say that I’ve always wanted to work on a story in Cambodia. The very thought of entering another culture from a country of relative economic advantage makes me uncomfortable. The potential power imbalance between photographer and subject gnaws at the viewfinder. I didn’t have a grand agenda to pursue, no message to preach. And that was how I entered my first workshop.

2. WHAT IS YOUR PHOTO SERIES ABOUT?

This photo series ties back to the time when the Khmer Rouge would instruct soldiers from rural backgrounds to kill anyone found wearing glasses. Wearing glasses meant that you did a lot of reading, that you were an intellectual, an educated person from the elite class, and likely to protest against the ruling regime. This stigma and ignorance towards glasses and eye care persisted among the older folk, even after the influence of the Khmer Rouge waned. Farmers were just not expected to wear glasses. But things are changing with better access to education and technology. This series attempts to capture the growing number of glasses-reliant, rural children who, with their bad eyesight, are reversing the legacy of the Khmer Rouge.

3. WHY DID YOU DECIDE TO SHOOT IT?

Because my other ideas were either shot down by my tutors or were dead ends. One of my tutors, Sim Chi Yin, felt that this series could speak about the Khmer Rouge regime in a new way. It isn’t my intention to speak on behalf of Cambodians or assume that I have that right. But in some small way, in the microcosm of a workshop, maybe the banal eye glasses will be seen in a different way.

4. WHAT CHALLENGES DID YOU ENCOUNTER WHILE WORKING ON A PHOTO SERIES AND HOW DID YOU OVERCOME THEM?

The biggest challenge was the format of the workshop itself. I usually take my time with personal projects, so plunging into a five-day workshop where I had to present a finished series by day six was hard to swallow. There were many sleepless nights where I questioned my presence in the workshop. The existential daze dragged on as I bounced from one idea to another, second-guessing my instincts and producing work that irked and nauseated me. But by keeping things simple, everything finally came together at the eleventh hour, the day before the series was meant for submission.

5. WHAT DID YOU LEARN FROM THE WORKSHOP?

I learned that it’s important to chase after stories, even if they seem to lead nowhere. That overused line about the journey being more important than the destination is true from my experience at the workshop..

6. HOW DO YOU PLAN TO IMPLEMENT WHAT YOU LEARNED FROM THE WORKSHOP ?

The wild goose chase of finding the story might actually be useful in sussing out potential ideas in the future.

7. WHAT ARE SOME MEMORABLE MOMENTS THAT YOU EXPERIENCED DURING THE WORKSHOP?

The sky at twilight while pursuing a fruitless lead in a village, the little slice of North Korea at the Pyongyang Restaurant, and the enlightening group critique sessions where the tutors assessed of our work.