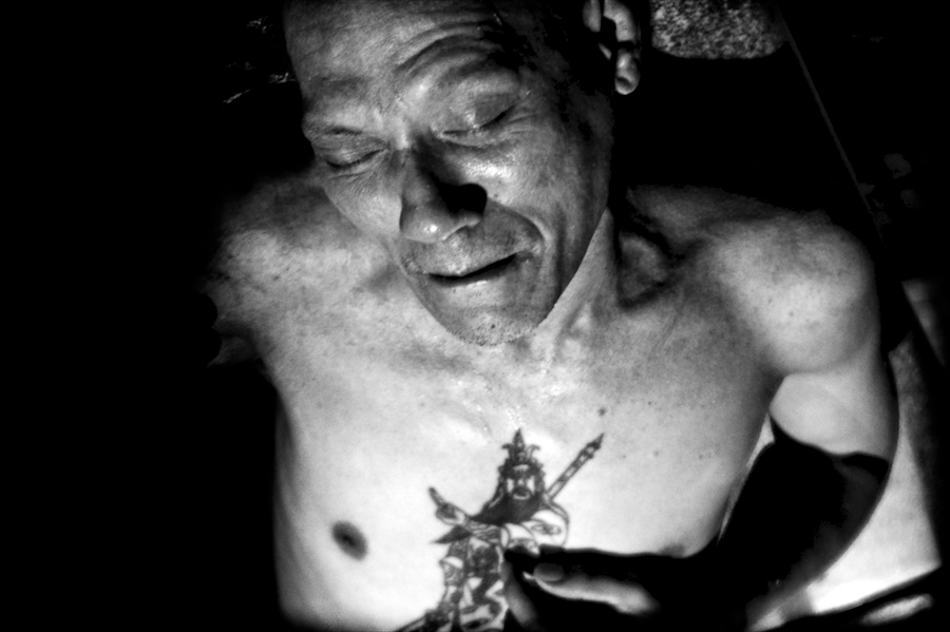 Some of you asked for it – here it is. An exclusive interview with Jonathan van Smit also known as K_iwi. Referred by some as fearless, Jonathan hails from New Zealand, and is a Gweilo (as he proudly carries the label) street photographer in Hong Kong. His photographs are a stream of stark, grungy, noir-ish beauty. To accompany the interview, Jonathan has also compiled an exclusive essay of his choice photographs.

Invisible Photographer Asia: Firstly, what’s a Gweilo Street Photographer doing in Hong Kong?
Jonathan: I came here in early 2008, moving from New Zealand where I lived next to the beach on a beautiful, rugged coastline. All my friends thought I was mad to give that up but I love China…the people, the culture, the food, and was happy to take a risk changing careers to move here.

What inspires your photographs? And what three words would you use to describe your street photography?
I wouldn’t say I have any specific inspiration as such. A few years ago, I took time off work to go to art school and began to paint and sculpt but both those took too much time and emotional effort so I turned to photography instead. I enjoy wandering around exploring in a sort of aimless, haphazard way, and I like the spontaneity of photography. I tend to walk around back streets and alleys, and I have a bad habit of wandering into buildings without permission too. I just shoot pretty much on instinct whenever something catches my eye. I do have some recurring motifs such as empty chairs that refer to personal stuff but that’s instinctive rather than considered.

How would I describe my photos in three words?  Dark, anti-art, edgy

Can you tell us what cameras and tools you use to photograph and why you use them? Digital or Film?
I use a Leica M9 and sometimes a Ricoh point & shoot. I don’t use film anymore as I can shoot 200 or even 300 frames on a good day which makes film too impractical. Very wide angle lenses are important to me, especially 15mm and 21mm. I shoot in RAW, and post-process with Aperture and Nix Silver Efex. Mostly, I increase contrast, dodge & burn quite a bit and sometimes increase grain too. I like rangefinders as they’re small, unobtrusive and I can see what’s walking into the frame so that limits the choice to a Leica even though they’re wildly expensive. I like the Leica form-factor too. I can focus them or change the shutter speed or aperture without even looking at the camera. The Leica shutter release is fast too. I know exactly when the shutter is going to trip, and it’s pretty much instantaneous.

What is your photography technique, or philosophy perhaps?
I like taking photos of people but I don’t usually want them engaged in the process of taking the photo. I’m just an observer not a participant. I like to shoot really close if possible, sometimes less than a metre away so that feeling of intimacy is accentuated. Often the moment of opportunity is fleeting or maybe the situation is challenging. If that’s the case then I don’t have time to frame through the viewfinder and just guess at the focus distance. I’m suspicious of superficial ‘prettiness’ so I reduce the photo’s technical quality quite a lot. I’m conscious that this often makes my photos less attractive or interesting to others but that’s not my prime concern.

There are some stark, incisive photographs in your ‘Real Lives’ series, can you tell us more about the series?
I’m attracted to the flip-side or darker side of life, it’s visually more compelling, and I’m interested why some people have such different life experiences. It’s been a privilege to meet people like that, and I admire their bravery in surviving against the odds. As just one example, women who are left destitute after their husband has run away, they can’t get a residence or work visa in Hong Kong, they’re not eligible for social assistance, and are forced to live on the streets or in cheap cubicle housing in a day-to-day, impoverished existence with no easy options. My photos aren’t meant to be documentary, they’re just an outcome of my own curiosity, my interest if understanding how others live their lives, and my reaction to meeting them sometimes. My photos serve as reminders, traces of memories for my experiences.

Likewise, there’s a noir-ish beauty to your Yunan photographs, can you tell us about those photographs as well?
I guess the photos are simply my reaction to the place, the people. To me it’s a mysterious place, I was alone, walked around a lot in small villages, up in the hills too. I felt alienated there, an outsider trying to look in.

What’s your personal favourite of the photographs you’ve taken, and why is it special to you?
I don’t really have favorites but I have taken lots of photos that I now don’t like. I don’t often look at my photos after processing them. If I do look at them my reaction is heavily coloured by the experience and emotion of taking the photo so it’s hard to be objective about them.

Is there any other place or people you would like to photograph?
I’m interested in visiting the north west of China, and I’d like to go to Afghanistan and North Korea. I’m currently trying to figure out how to get an Afghanistan visa. My main interest is still Hong Kong though, it’s my home now.

Are there any photographers that inspire you, or whose work you admire?
I prefer painters rather than photographers but of the latter, I like Robert Frank, especially his later, more personal work. I also like many Japanese photographers especially Araki and Moriyama, they both manage to transcend their subject matter in such a compleling way.

Are you working on any photography projects at the moment?
I don’t think much in terms of projects. I just hop on a bus, or get the MTR, and get off somewhere without much of a plan. Mostly I go across to the Kowloon side of Hong Kong, to places I love like Sham Shui Po, Cheung Sha Wan, Shek Kip Mei, Yau Ma Tei, and Kwun Tong.