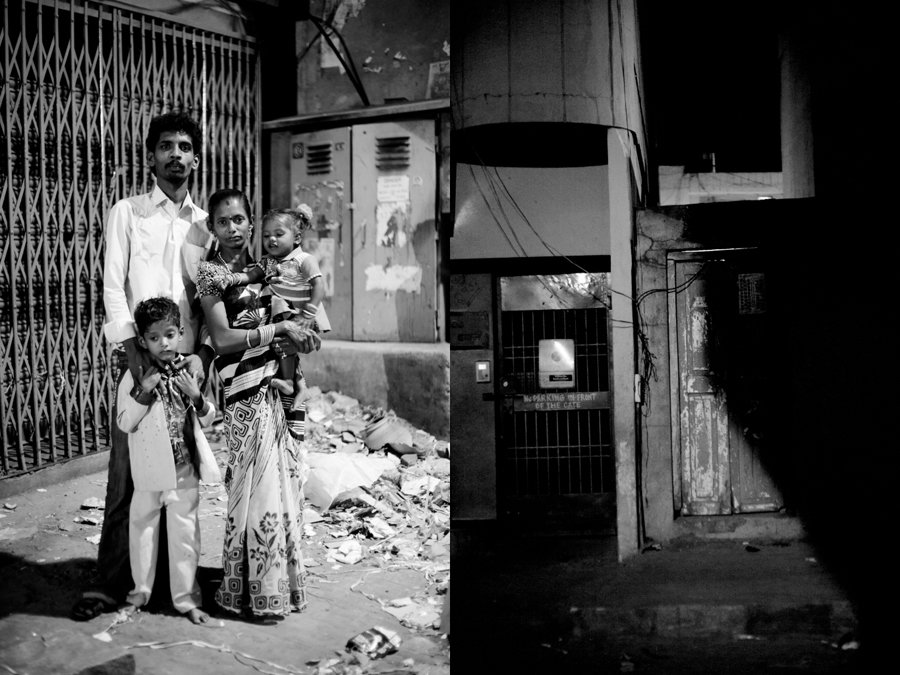 Silence shadowed by the presence of a few angry dogs replaces the chaos and the clutter of the by lanes. The sodium vapour lamps stand witness to a man combing his hair one last time before he heads home for the night. The hiss of the idli steamers draws people, like moths, on a just-rained evening.

The series seeks to explore the spaces and people of the Pete area, which gushes with a different hue after the clatter of commerce has hushed. The narrow lanes stage a drama of warmth, solitude and whiffs of creepiness. It is the actors in this mise-en-scène that I’ve tried to portray.

Vivek Muthuramalingam is a Bangalore-based independent documentary and editorial photographer. He works on issues related to health, occupation and social disparities. In his personal body of work he explores the deep and intimate relationship that he shares with the city that he inhabits. He credits most of his learning to the workshops at Angkor Photo Festival (2007), Foundry (2009) and the Goethe, India supported ones (2007, 2011). Street photography is what he immensely enjoys when he is not preoccupied with his assignments.

View more of Vivek’s work on his website: http://vivekm.com

During my photographic rambles on the streets of Bangalore I have often stopped to observe how urban spaces and the people who inhabit them differ with the changing light of day and night. It is almost as if that the spaces themselves are moody- conducive to bustling activity in the day time and then turn into dark and often dangerous spaces that made people avoid at night. My observation also included men and women who ‘owned’ these spaces at varying times and how they specifically connected with certain elements of the space.

What is the significance of the Pete area to you? Do you live there?

The Pete area is one of the oldest neighbourhoods in Bangalore where astonishingly tiny structures, built very close to each other pamper a myriad of commerce during the day. The tiny streets that crisscross this locality throw up visual surprises of every kind and hence are a street photographer’s delight. ‘Leak’ is a very personal, intimate way of looking at Pete.

I don’t live here, but I often wish I did.

How would you describe your ‘style’ of photography today?

I don’t know if I have a style yet. I am still experimenting with approaches, tools and techniques and I am thoroughly enjoying the process. Sometimes I let the nature of my work dictate the kind of images that it warrants. Hence I use a variety of cameras, formats and sometime I work on film as well.

To work on a piece, my foremost ingredient would be inspiration — it could be a complex visual I have witnessed, a stimulating conversation with a writer, a page from an extremely vivid childhood memory, or even the scent of a lover. I like to submit myself to this state, work furiously and till a point I sometimes become numb.

Do you think the way you work has changed since you first began photography?

I think so. Photography has made me more observant, more sensitive and more involved with the places and people who surround me. During my initial years I think I was deeply involved in ‘being’ a photographer, an artist. I constantly craved to make a great image often losing out on the essence of the experience. I gradually learnt, with the help of many wonderful mentors, that I needed to open and whole-heartedly accept the situation, be sensitive to everything around you, to be able to be a better photographer.

What are some things you learnt during the Angkor Photo Workshops in 2007 that has shaped or influenced the way you worked?

Going to Angkor has been the best thing to happen to me during these formative years. Antoine D’Agata, my teacher, sat with each one of us students, understanding our background, perspective and desires and then helped us try and develop a language that was true to ourselves. The workshop was quite intense and the discussion with fellow participants in the evenings was always stimulating. The workshop has helped me ruminate over some of the documentary projects that I later worked on, to be able to explain the reason and question myself the genuineness of the exercise. More than that, I was made to realize that while working on sensitive issues there are more important things than photography.

It was also a great way to connect with young passionate photographers across Asia and now I have so many friends spread across in the region! I have to mention the extremely warm hearted Françoise Callier, who was instrumental in bringing me to Angkor and for being kind enough to even buy a couple of my prints.