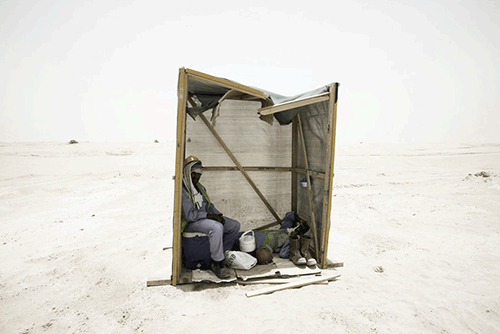 There are three different Dubais, the expats, the Emiratis, headed by Sheikh Mohammed, and then there is the foreign underclass who built the city, and are trapped here. They are hidden from plain view. Every evening, the hundreds of thousands of young men who build Dubai are bussed from their sites to a vast concrete wasteland an hour out of town, where they are quarantined away. Until a few years ago they were shuttled back and forth on cattle trucks. Sonapur is a rubble-strewn patchwork of miles and miles of identical concrete buildings. Some 300,000 men live piled up here, in a place whose name in Hindi means “City of Gold”. As soon as the workers arrive at Dubai airport, their passport are taken from him by the construction companies. They work 14-hour days in the desert heat for 500 dirhams a month (100US$). The water delivered to the camp isn’t properly desalinated.

Since the recession hit, the electricity has been cut off in dozens of the camps, and the men have not been paid for months. Their companies have disappeared with their passports and their pay. This is all supposed to be illegal. Employers are meant to pay on time, never take your passport, give you breaks in the heat.

There’s a huge number of suicides in the camps and on the construction sites, but they’re not reported. They’re described as ‘accidents’. Even then, their families aren’t free: they simply inherit the debts. A Human Rights Watch study found there is a “cover-up of the true extent” of deaths from heat exhaustion, overwork and suicide, but the Indian consulate registered 971 deaths of their nationals in 2005 alone.