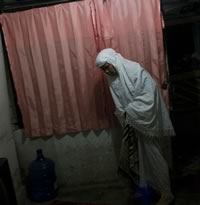 My initial interest in the Chinese Muslims in Indonesia stems from a general fascination with the Chinese communities of Southeast Asia. As a third-generation Hokkien born in Singapore, I’m a member of these diverse communities. More often than not, the lives of Chinese migrants in Southeast Asia have been determined by circumstances beyond their control.

As a photographer working today, it is inevitable that the main thrust of my project has been to document the stories of the current Chinese Muslims, so as to understand their motivations for conversion, and the effects of that decision on their lives and their relationships with families and friends.

Today, there are some 60,000 Chinese Muslims in Indonesia and most of whom are new converts, notes Rosey Wang Ma, a Chinese Muslim researcher from Malaysia.

However, as political scientist Leo Suryadinata has pointed out to me, such an approach would only present the current spate of conversions, obscuring the fact that Chinese Muslims had been present in Indonesia before the arrival of Admiral Zheng He in the early 15th century. Ma Huan, a Chinese Muslim interpreter on Zheng He’s fleet, first reported during their passage through East Java that the “local” population was made up of non-Muslim natives, Muslim foreigners and Chinese—many of whom Muslims. The Banten chronicles even recorded that the founder of the first sultanate in Java was Chinese. When the first Dutch fleet arrived at Banten, West Java, in 1596, the Javanese also told them that they had their origin from the Chinese.

After the Dutch had killed two-thirds of the Chinese inhabitants of Jakarta in the 1740 massacre, the pace of conversion accelerated. The Dutch took steps to limit the Chinese from adopting the Islamic faith, writes French historian Claudine Salmon, because it would reduce the population liable to the poll tax and facilitate the fusion of the Chinese with the pribumi (“indigenous” peoples). This policy of segregation, predating those of Suharto, would contribute to the contemporary notion that Chinese and Islam are incompatible.

But even with the Dutch regulations in place, conversions persisted. By the start of the 19th century, most of the cities in Java, Madura and Makassar had a district called Kampung Peranakan. The term “peranakan” was used possibly until the end of the 19th century in Indonesia to refer to Chinese Muslims. These peranakan communities would eventually merge into the pribumi population, adds Salmon.

With these concerns in mind, I have documented the mosques, kramat (holy tombs) and villages related to the histories of Chinese Muslims in Indonesia.

Examples include Banten’s Masjid Pacinan and Jakarta’s Masjid Kebon Jeruk, both of which are known to have served the peranakan since the 18th century. Chinese Muslims have also built new monuments in recent years. Perhaps the most prominent is Surabaya’s Masjid Cheng Ho. Inaugurated in 2003, it is the first mosque in Indonesia to be named after a Chinese Muslim.

Apart from articles published by historians, I have also referred to Indonesia’s rich legacy of oral and babad (chronicle) traditions for a sense of the mythical elements within this fascinating story. At Kudus in Central Java, Chinese Islamic teacher Kyai Thelingsing is credited for influencing the city’s woodcarving technique, which is renowned across the archipelago. At Gresik, East Java, a Chinese Muslim by the name of Nyai Ageng Pinatih is believed to have served as the foster-mother of Sunan Giri, an Islamic saint highly revered in Indonesia. Her tomb at Kampung Kebungson, a village she founded at Gresik, and that of Kyai Thelingsing at Kudus, continue to be visited by Muslims from different ethnic groups.

Meanwhile, the presence of kramat in Chinese places-of-worship like the tomb of Siti Fatimah at Palembang’s Hok Cheng Bio or that of Dampu Awang at Semarang’s Gedung Batu suggests that religious harmony has been the norm rather than the exception in Indonesia.

The third section of my project is to track down and photograph pribumi Muslims who are willing to acknowledge their Chinese ancestry, thereby illustrating the long history of assimilation between the Chinese and the “locals”. Perhaps the most famous example is that of Abdurrahman Wahid, who claimed to be a descendent of Tan Kim Han, a Chinese Muslim ambassador of China at the Majapahit court.

On the island of Bangka, I met Abang Faizal, a 12th-generation descendent of Chinese Muslim Lim Tau Kian, whose sons are credited for developing the town of Mentok. This Muslim family is considered to be the first developers of the tin mines on Bangka, writes historian Mary F. Somers Heidhues, before the arrival of Chinese coolies in the second half of the 18th century.

“Chinese Muslims in Indonesia” the book is available for purchase online at the IPA Photo Book Store.

Neither Beginning nor End, by Peter Teh
Close Enough, by Charmaine Poh
Photovoice SG INTER-VIEWS & Participatory Photography in Singapore