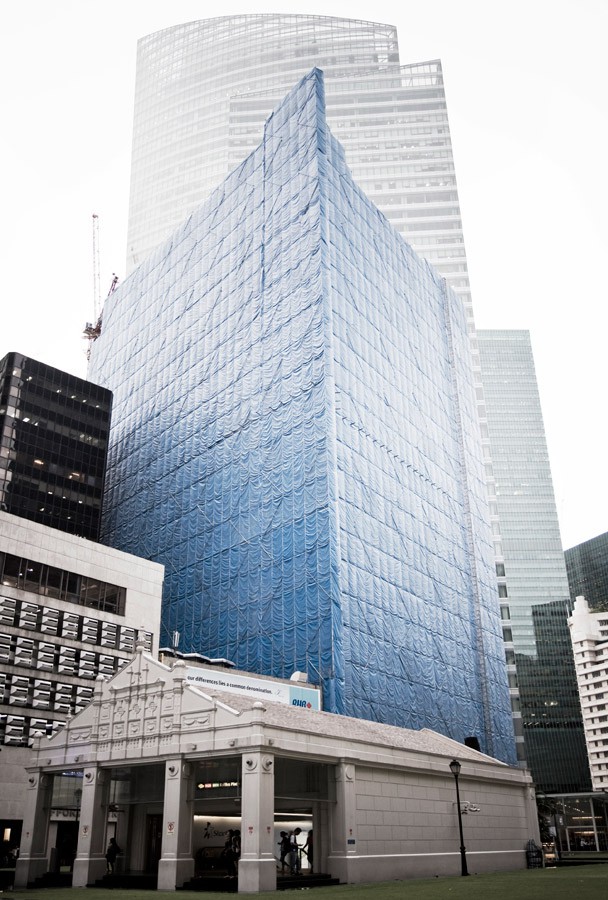 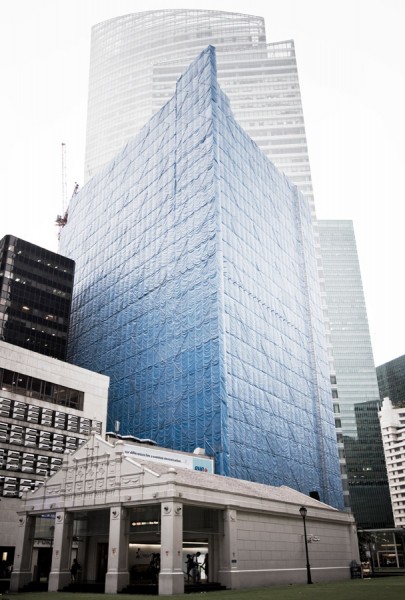 The heavily wrapped building was no stranger. It became a familiar sight after passing it several times while I drove along Shenton Way, Singapore’s financial district. I have wanted to photograph it but gave up the notion due to the costly parking charges.

One fine day, I noticed several floors had been demolished and realized the hint. It is no longer a want but a need to photograph.

I confess. I am unfamiliar with the building and neither does it serve me with any worthwhile memories. I simply felt that as a resident creative of the city, I should document the seemingly insignificant. Insignificant presently but, hopefully, of greater significance in the future.

Economic progress is a most powerful motivator and its results, most significant. How else can one explain the mere months it took to raze a towering skyscraper to the ground.

Change, perhaps, is the only constant behavior of this city.

Imagine the scenario of a travelling businessman who returns to this city after two years, only to witness a radically new building. Reality has, ironically, taken a dream-like manifestation.

If my memory serves me well, the adjacent building is The Arcade where many money-changers operate. It is highly possible for students studying overseas to have ventured to the area for foreign exchange services. How would they feel about the missing building upon their return?

I feel that it is unlikely for this city to preserve any sites for prolonged periods. It is inevitable that our memories undergo constant updates, anchored by photographs of the once-were and seemingly insignificant. Yet how many city dwellers are willing to photograph an otherwise emotionless building?

After being a photojournalist for over a decade, Bob reflects on the rhythm of life and how it inter-twines with his personal photography. Reflections is a weekly column called Appreciating Life originally published every Thursday in LianHe Zaobao, a Chinese language Daily in Singapore. English translations by Sebastian Song.

Our Coastline, by Lim Weixiang
Project 37, by Chow Chee Yong
In a Private Moment, by Aujin Rew