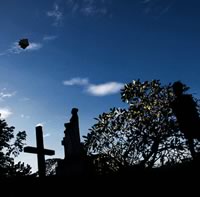 Manila North Cemetery – A Placid Coexistence with the Departed

It’s a common perception amongst us mortals to think of cemeteries and graveyards as eerie places to find ourselves in at. Throughout our history from folklore to pop culture; to even the devout and the pagans; mankind has established any burial grounds as something that is hallowed for the departed. But the passage of time inevitably alters everything and in collusion with that is the entailment of man to adapt.

Poverty is something that ironically goes in connivance with progress and it is evident especially in this country. As the rich get richer, the poor constantly gets poorer. Brought about the instinct to adapt, marginalized Filipinos have found peculiar ways to live within the city, forming communities the most unusual places. From dumpsites to bridges; to even makeshift houses that float along the coast, our countrymen have managed to stay within the hustle and bustle of the city for the belief that there’s a better chance of a future here compared to the provinces. But there’s nothing I personally found more bizarre than living amongst the dead.

The roughly 54-hectare Manila North Cemetery is considered to be the largest and one of the oldest cemeteries in Metro Manila. It houses hundreds of thousands of the city’s Catholic dead while it hosts a living community of more than 2,000 inside mausoleums and makeshift personal spaces built atop “apartment-type” tombs. It is owned by the local government of Manila and has already established a conventional locale with its residents; requiring them to have titles for the space they occupy and even permits for the businesses they establish within the premises.

To equal it’s oddity, I found out through the personal accounts of the residents in the cemetery that they have been living there for a number of generations already. An 80-year old woman was pleased to tell me the story of how she was born, raised, found love and even nurtured her children within the premises of the Manila North Cemetery. She has made a living by taking care of a number of tombs throughout her life, and she gladly intends to live the remainder of her years there.

It was somewhat a consensus amongst the occupants that the harshness of life was initially the main reason why they resorted into settling down in such an unconventional place of dwelling but unanimously most of them are happier to be in the area rather than anywhere else. For them, the cemetery is like a high-end village that is a lot more posh compared to other makeshift domiciles the city has to offer. And I do not disagree. They have everything that anybody would look for in a community – governance, convenient access to water and food, a regular livelihood, even internet shops and gaming stations for kids to pass the time. But most of all, a place that is legally their own.

At a personal level, the communities within the Manila North Cemetery is a testament to the resilience of the Filipino people to survive and triumph over anything that life tosses at them. I never even had the notion that they were impoverished since they were living pretty comfortably, even in luxury at times when compared to the other dwellings that I have had the chance to come across within the city.  It is truly the more opulent side of town – relatively. The only difference is that they placidly share it day and night with the departed.