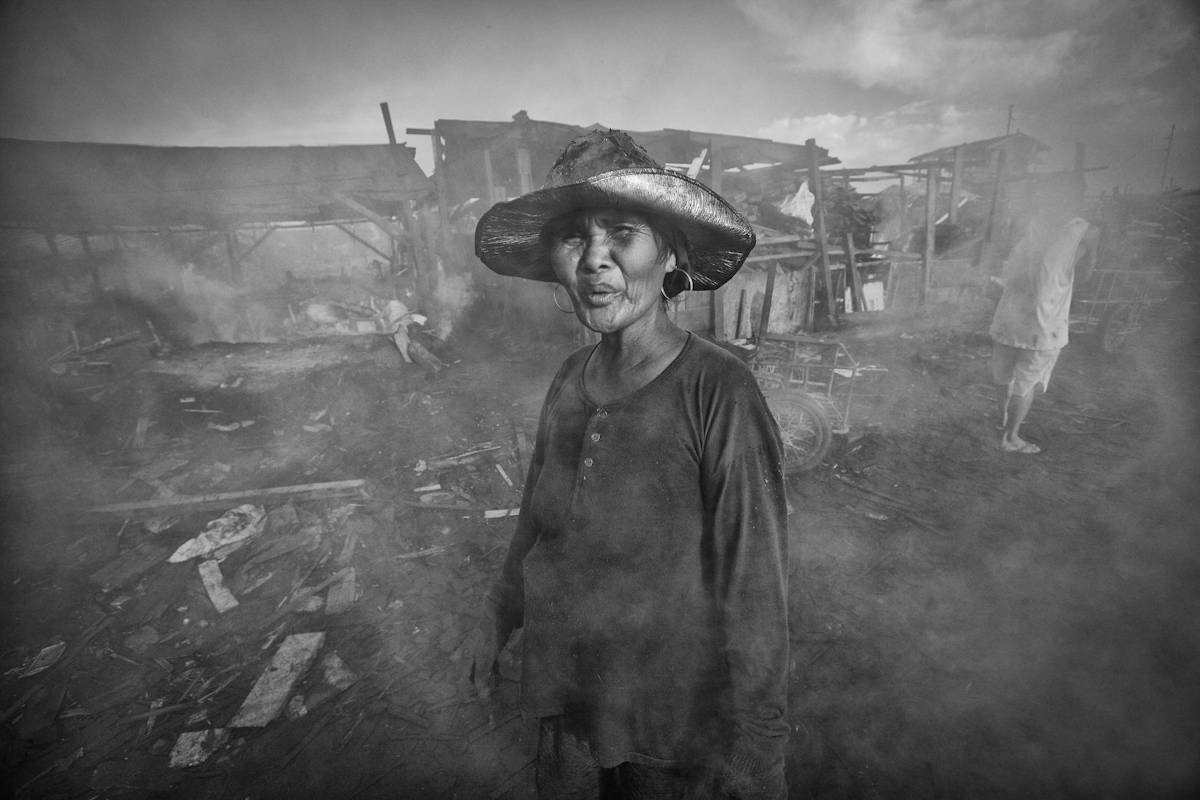 Daily life inside the dumpsite in Vitas, Tondo. 2007-present

I keep going to Vitas because it was the first place where I got slapped by the reality that this kind of poverty existed in our world. It also feels like home.. Some sort of a refuge as well since I’ve always felt the warmth and resilience of the human spirit through the kindness of people who do not have anything but yet, still manage to wither through life with the hope of a better day.

Tell us how did you start?

The curriculum for photography in my university would only get you through so much. I knew I had to look for another way to learn. My father got me my first digital SLR and I tried out shooting weddings for a studio as a “voluntary assistant” where I just shot for free while being taught by the photographer who ran the studio. I learned a so much by shooting weddings — how to use my camera and the technicalities that surround it; capturing the moments that needed to be captured; dealing with different people with different attitudes; getting them to be comfortable with me taking photos of them etc. And before I knew it, I was already getting paid. I was making good money for somebody still trying to finish school.  It felt great to be able to buy your own gear from your own money and take your family out to dinner once in a while at that tender age.

After shooting roughly 150+ weddings, pre-nuptials, debuts and events I wanted to try something else and I decided to try shooting for the school paper. I started following the news and became obsessed by it. It came to a point that I would stalk media cars and even skip my classes just to be able to shoot rallies, hostage crises, demolitions etc. I started to post my photos on websites such as Flickr and Multiply. I eventually I got a call from then chief photographer of Reuters Manila Darren Whiteside, asking me if I wanted to become a photojournalist. It was really a rare opportunity. He was really patient with me and I picked up an enormous amount of knowledge from his mentoring. My first assignment that got published was a really simple photo from the Stock Exchange. Seeing your photo published and used by different papers and websites for the first time was really exhilarating.

Do you have any influences? where do you get your inspiration?

My main inspirations are the places and people I shoot. Every subject I meet; from the people at the dumpsites, to the politicians, to the disaster victims all have a story to tell. It nourishes you as a person even just to meet and have a simple conversation with them. Even without photographs, being in new places and experiencing something different always inspires me to do more. Pictures alone can never replace actually being there.

There’s a long list of photographers whom I draw inspiration from. To be honest, I never really had the chance to look at other photographer’s works when I was starting. It was only around my third year when I started to know about the likes of international photographers such as Nachtwey, John Stanmeyer et al, whom are all a source of inspiration to me today. During my formative years, I was following the works of local young talents here in Manila. I wanted to be like them — shooting amazing photos, wonderful stories and getting them published day in and day out. What’s funny is that they’re all my closest friends right now and they never believed me whenever I told them that they were my biggest influences as a photographer when I was still starting out.

In only five years, you made a name in both wedding and news photography. Which discipline do you enjoy the most?

Wedding photography is something that I enjoy but not at the same level as photojournalism. Photojournalism is something that will always be a big part of my life. I took pleasure in shooting for the wires. I absolutely lived for the pressure of delivering strong images at an almost real-time pace and I could say that it came instinctive to me. What is more is that I got a natural high from it and changed me as a person. It opened my eyes to realities that I wasn’t adequately aware of as I was growing up.

What is the most memorable coverage as a news photographer?

The Typhoon Ondoy (Internationally known as Ketsana) coverage was something that will always have an impact on me both as a person and a photographer. I spent almost a week living in my car going to different areas massively hit by the disaster. I was heavily depended upon and I was able to produce photos that got published everywhere worldwide.

But more than that, it was the first time I saw death first hand. There was this mother in a morgue who lost her whole family to the flood. Her kids were just babies and his husband wasn’t found anymore. Instead of taking the photo which I knew would be on a thin line between a powerful photo or something morbid; somehow my beliefs made me not bring up my camera and I did my best to comfort her instead. The most memorable moment for me as a photographer was when I realized that I was a person first, photographer second.

What is your biggest break?

My first big break was during the Peninsula Siege by the Magdalo breakaway group. I was still in an “intern” status with Reuters and was on my way to school when I heard that their leader just walked out of court and onto the streets. I had a feeling that it would be big and I was the first photographer on the scene. Reuters had the first photos from that day and I think our chief photographer started to trust me more and started to have confidence in me after that coverage.

Is there another field in photography you would like to try?

Fashion photography is something I’ve always been curious about.

Is there a story you would like to pursue?

I’ve always wanted to pursue a story about substance abuse. I know there are already hundreds of works on it already but it’s something very personal to me and I hope I could do a story on it soon.

Aside from photography, what are your interests?

I am crazy about mountain biking. It’s just a fantastic release. I’d do anything to share the same feeling to the people I know.

How did you learn about the Angkor Photo Festival?

Some of my colleagues and closest friends were all alumnae of the Festival. They were all participants before me and they really encouraged me to apply as well.

What did you learn from the workshop? Did it help you with your career?

In a nutshell, I realized that news photography, although it seems strikingly similar to; is a totally different world from documentary photography.  It came to a point that everything that I was doing for the wires became repetitive. Shooting for the wires was really more of looking for a strong image to match a story instead of championing the story of the subject. I was looking for more content and substance with my photography and I was really engrossed with pursuing documentary because the wires, even with the worldwide audience, wasn’t really a venue wherein these stories could be done and heard. I have been so engrossed with the “wires style” of photography that whenever I try to do personal stories I still approach them the way I would do from a wires assignment. The workshop really opened my eyes to the difference of the two disciplines and as well as the distinct kind of approach and work ethics needed to do each.

What cameras do you work with?

I use Canon 5D Mark 2’s. Ever since I started to used fixed lenses I almost never went back to zooms unless I needed to. I love the flexibility and advantage of having two cameras with different lenses.

Do you prefer film or digital?

I never had the chance to do any assignments in film. I wouldn’t be as confident with doing assignments with it compared to digital.

What is your advice to young photographers?

“Keep shooting with your heart.” The most captivating photos invoke emotion to its audience. Have a feel for what you do. Whether it’s a photo of a landscape, still life, war, fashion or documentaries, every image starts with a feeling. How you convey that feeling through your images determines how successful you have communicated the story through your photography. Always respect your subjects and never ever take the information you have out of context.

What is your advice to those who wish to participate in the Angkor photo Workshop?

Just have fun. Go there with an open mind and an open heart. The best way to learn is when you are enjoying something. Take it as an opportunity to master your craft and find what direction you want to go as a photographer.

Photo Essay: The Refugee Problem In Azerbaijan, by Ilkin Huseynov
Against The Dying Of Light, by Veejay Villafranca
Fragile, by Jes Aznar