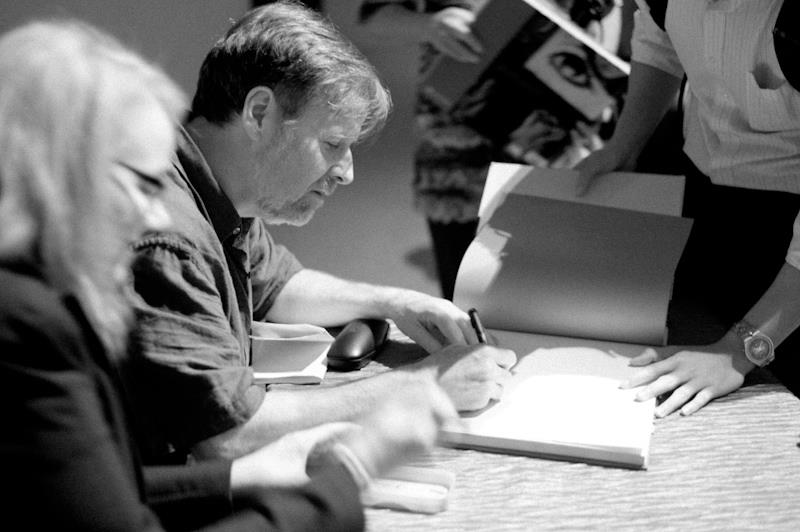 Part 5 transcription of the Q&A session during the public talk given by photographers Alex Webb and Rebecca Norris Webb, and David Chickey of Radius Books, at The National Museum Of Singapore on 9th March, 2012. 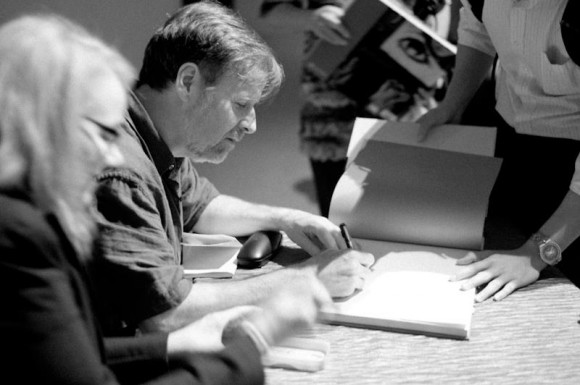 Knowing when a Project ends

Question: You guys talked about how you embark on journeys and projects for a long, long time. And, well people starting out on photography find it such daunting thing, you know, because especially the new generation, it’s all about immediacy. Putting things online, getting the likes, that sort of things but for those who are interested in doing something long. From both your experiences, when is that moment when you know that the project has come to an end because I am also an aspiring writer. I understand that the narrative ends, that a story ends. How does it come to an end? This continuum always moving and changing even after the book has ended.

Alex: Well, I think it’s a really good question and I am not sure if there is really a good answer to it.  (Audience laughs)

Look, I mean, it’s a feeling, it’s an emotional feeling. Again, it’s something intuitive, it’s somehow you feel like you have to let it go. And move to different projects. I mean my Haiti work basically took two years to complete. I worked very intensively and I came to the viewpoint where I felt like ok, that’s it.

You know, part of it has to do with feeling, sort of sense of two years of Haitian history has been particularly insular on some level. There’s also emotional feeling. On the other hand I mentioned US-Mexico border project, started in ‘75, I didn’t feel like ready to let go until 2001. In that period of time between that, I brought out my Haiti book, my Florida book, my Amazon book, a book called Dislocations, all in that period of time that I was still working on and off on the US-Mexico border.

It was just something that I just didn’t wanna let go of, it was like an itch that I have to keep going back to get more of. You do a book and it cuts something off, at least for me. I’ve never return to Haiti with the same sense of passion as when I was there working on the book. I’ve gone back and done some interesting work but I’ve never had the same sense of commitment. Same thing with the US-Mexico border. Once it was published in 2003, I haven’t gone back with the same sense of passion. So there’s something disturbing scary about completing a book. But I don’t think, I don’t think there’s an easy answer. I think it’s something you have to, you have to feel out.

So, so, you know, for instance, you know, in many of my books, pieces of them have been done with the help of magazines at different times and you learn as a photographer, work with certain kind of rhythm that there’s the rhythm of doing one day shoot for a magazine versus filling a eight week shoot for National Geographic versus doing a seven year book project.

And you know, you learn one day thing, you learn certain kinds of shortcuts. you do certain things and so forth. It’s not the same as waiting for that picture to emerge when you have the amount of time and feeling that you might have on your own budget. On the other hand, every once in a while, in one of those one day shoots, you are out there in the world, there’s always the possibility of a picture. So something might happen.

So, you know, in one of the things that’s distressing to me as a working photographer, is that, you know, with the demise of all the magazines, I can’t work, I can’t find the work, you know, the funding that I used to get from magazines to go do things. And I do rely on magazines. And I will do those short ones to keep them happy but I also have my long term agenda simultaneously, looking for those pictures.

Rebecca: I don’t mean to discourage you with this comment but something happened that I guess it was about, I don’t know, eight or nine years ago, a friend of ours who is a photographer came up to us and said, “When did you embark on, you know, the first project? That was, you know, that was the project in which, sort of, was indicative about the ways you see and had, was about your photographic vocabulary.”

And I find that ten years is when I first wandered into the Coney Island Aquarium and took that photograph of the whale that looks like it was floating over the heads of those aquarium visitors whose faces were reflected in the tanks and then it turned out that Alex, Alex…

Alex: Yes, it’s about ten years since I started photographing seriously that I discovered working in color the way I worked. And this person said that this was often what he found.

Rebecca: He interviewed several photographers and they all said it was ten years from where they first picked up a camera seriously and embark on that project. And we also realize now that Malcolm Gladwell book, this sense of ten thousand hours to master anything if it’s, you know, any kind of art form or sport.

Look, you know, I mean, photography is a deceptively simple art form. You put the standard hydride, silver salts and the digital sensor respond to the world. But ultimately, it’s very difficult art form. And you know, if you are a painter, maybe you do eighteen canvases a year and you think twelve of them are pretty good.

Well, for photographers, I don’t know, take film, you know, fifteen hundred rolls of film every year which, and again you have twelve pictures. And it’s a different kind of process but it’s still, you’re not going to have lots and lots of good pictures in short periods of time.

Sebastião Salgado : The Power and Privilege of Photography
Sometimes you can destroy your photography by being a photographer
Q&A with Webbs & Chickey Part 2: Seeing In Color