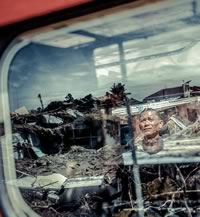 Typhoon Washi, locally known as “Sendong” hit the southern Philippines on December 16, 2011 triggering flash floods and landslides which resulted into 1,268 confirmed dead in the rampaging floodwaters brought by the tropical storm. More than 429,000 displaced and about 37,300 people still huddled in overcrowded evacuation centres until this very day. Illegal logging and irresponsible mining are blamed as the culprits behind the flash floods that has killed and displaced more than a thousand residents from the provinces of Iligan and Cagayan de Oro.

In this short interview, Tammy David finds out more from John about covering disasters.

Where were you when Sendong happened and how were you able to get there?

I was at home in Manila when it hit the southern part of the Philippines. Storms and typhoons are a usual occurrence  in our country so you don’t presume every storm that comes along would be a news event especially if it doesn’t involve the Capital.

How do you prepare for a shoot in a disaster area?

There actually is lot of preparation done in the quickest possible time involved whenever there is a disaster to be covered. It is not about just grabbing everything you can get a hold of and simply hop on the first trip to the affected area thinking that you will be fine. You can, but by doing so you put your safety, as well as of others at risk if you are not adequately prepared.

The first thing to consider is to immediately gather all the information you can. This usually involves meticulously monitoring any form of media for the latest updates. Traditional media such as the radio and television are incontestable sources but the internet and social media sites did play an enormous role with providing us with valuable information. New media was even faster than traditional media with transmitting the latest developments. While it is true that information from this particular source can be quite loose in terms of faithfulness, it is still your job as a journalist to verify and validate any piece of data you get.

From monitoring, you get an idea of where the hardest hit areas are and you get a general scope of how the situation is on the field. Once you decide that it is a significant event that needs to be covered and is feasible for you as a journalist to do so, you then move onto logistics wherein you study maps and the proximity of the areas you would want to cover. Having known and reliable contacts in the area is one of the most indispensable resources a journalist can have during these events since you could have a more clear-cut idea of the situation you are about to get into. I was fortunate enough to know good friends and colleagues who were already in the area making it possible for me to prepare as much as I could before camping out at the airport to wait the first flight available. It is not always the case so it is mandatory to learn how to gather information on your own instead of relying on others for it.

Disasters and other breaking news events happen instantaneously that it leaves journalists with little, or almost virtually no time to prepare. The one thing that we can be in control of is how technically prepared we are to engage in various circumstances. By this I refer to the preparedness of our equipment and various tools we would need for a variety of situations we may encounter on the field. This would range from ensuring that your cameras are always ready; cellphones and batteries charged; to packing a grab-bag with essentials such as food, clothing and first-aid kits that is ready to go at any given time.

Photojournalists are practically married to their cameras and they are never far away from reach. People tend to think it’s exaggerated, but in a profession where getting to the story at the fastest possible time can mean so much, it’s always better to over than under-prepare.

What are the challenges you had to face while covering?

The primary concern to me throughout was the financial costs of covering a news event. As somebody who just shifted into freelancing, it was new to fund everything from my own pocket and not having any support or funding from an agency or publication. Every move you make costs money – plane fare, accommodation, transportation, food. I was fortunate enough to have adequate savings, supportive parents and selfless friends and colleagues in the area to help me shoulder the costs of being there.

The usual challenges like logistical and technical aspects were reduced to a minimal as a result of adequate preparation. I was fortunate enough to know a little bit of the local dialect so I did not have difficulties with any language barriers. Contacts and friends were the most essential, as they helped me with information, lodging and transportation.

The biggest challenge for me personally was the emotional aspect of the job. I have never seen so much dead bodies in my life and had that much people break down into tears as I listened to their stories. There is a notion that news photographers and journalists have to set aside their personal emotions and feelings to be able to cover these events as objective as possible. There is some truth to that, for we do try to switch off on the field to an extent. You have to. But at the end of the day you are still human and you take photos based on feel and sensitivity, not just for mere aesthetics and the purpose of being to be able to sell or publish pictures.

You did some video for Sendong. How was it and do you think it is more effective as stills or the same?

No matter how much we may think that they’re the same, shooting video and stills are totally two different mediums in two different worlds. It is true that there is a lot of creative opportunities with moving images that you couldn’t possibly dream of doing with stills. First-hand interviews give the audience the story straight out of subjects themselves. Sound bytes and audio effectively used to give the audience a feel of the place and just adds another dimension to storytelling. The movement and transitions can create the kind of impact that the viewer is watching something that is live and actually happening instead of something that is static and frozen in time. Video does create enormous impact especially when done well. I did enjoy it since it enabled me to do things that would be hard to illustrate in stills. What I disliked was the enormous time required to come up with an effective piece. It also takes ages to transmit files from the field. I was fortunate enough to be able to collaborate with colleagues who were able to do a wonderful job with the material I had.

As much as I respect and believe in the power of video as an incredibly rich storytelling medium, I have always believed that a single frame shot at a peak moment can convey the essence of a story more than a video clip however brilliant it’s done. That’s why I’m certain that I shall always be primarily a photographer.

A lot of times people think that photojournalists are gung-ho with their equipment. But most of us do try to take good care of them as much as possible, especially the ones we own personally. I’m actually quite careful with my gear and take necessary precautions such as drybags and cleaning kits with me whenever I go.

With regards to freelancing, I am also currently new to it as I have grown up in this profession under an agency from the very beginning. Based on my own experiences as an aspiring photographer, the first word that comes into mind  whenever somebody asks me about getting into this profession is heart. And by this I am not trying to come up with a pageant-type of answer or logic. Ideally the best situation for a freelancer business-wise is to be commissioned or assigned by an agency or publication to do work for them. The guarantee of being compensated, published etc is there. It’s usually the more established photographers who get sent and assigned to do work on these events right away. And they never got to where they are simply by standing still.

The world of freelancing is really what you can make out of it. At least that’s what I’ve personally made out of it so far. The established photographers never got to the position they are wherein they get commissioned regularly simply by waiting for an editor to call them and hire them on the spot. They have paid their dues by working hard and wanting it enough for publications to trust them with these assignments. It can really be tough  especially with the changes that the industry is going through right now.

As emerging photographers, it takes an enormous amount of faith in the story as well as yourself to engage in a situation where there is a high potential of risk not only in terms of the investments you make financially and equipment-wise, but  possibly even your health or your life itself. Doing so without any agency or publication to provide you with resources or compensation takes away any financial motivation for doing a story and leaves you with nothing but your own beliefs and convictions in respect to the event to inspire you to go out and do work. And that, I personally believe requires a lot of heart to do so.