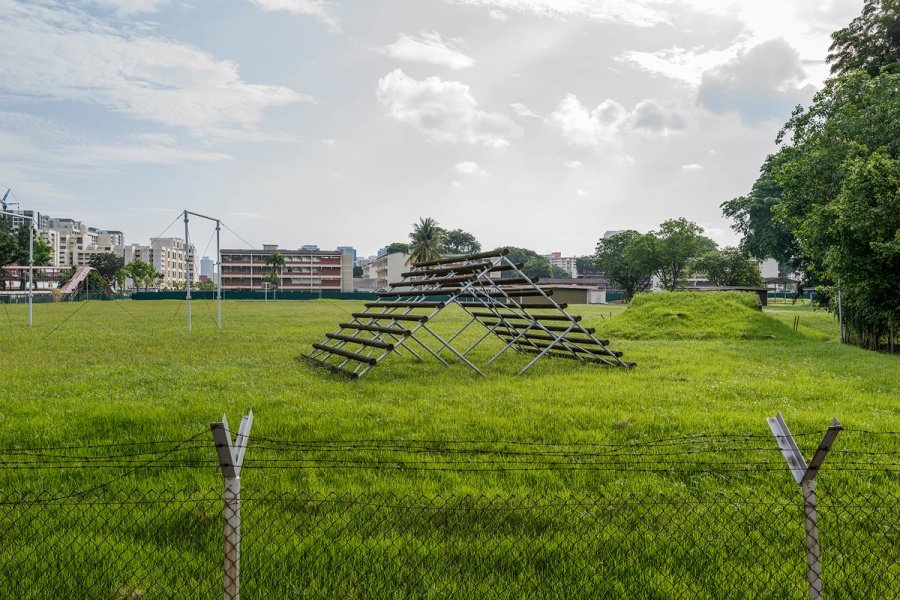 I have started working on this project after I was aware of the unused land near where I live and work. They gradually got developed and space started getting tighter. Construction sites were sprouting up around town, constantly, new developments were launched regularly, places where I used to go to hang out were disappearing.

It came the day when I had to face the possibility of moving out of this lovely apartment where I have been living in for the past 7 years. That got my attention. Space is scarce in a country like Singapore but having to move out of my apartment because 80% of my neighbours want to make a quick buck from the Enbloc sale of the old apartment block is not the way I like to understand the scarcity of space. I knew all this were all related and I had to investigate this through my work.

We have many unused plots of land for a very small country. I did not know how much I have missed these open spaces until some of them were built over. While they were still around, they seem to be idling, not doing much for us. I started appreciating these spaces and I have set out to photograph them while they are still around. With scarcity of land in Singapore, development was inevitable.

Every plot I have shot was done from a elevated angle. I had been photographing on a 3 metres tall tripod along with a 4 step ladder everywhere I went. I knew I had to go higher in order to show the plots clearer, not so high up like a view from that of a map but something that is still near enough to make you feel like you are on the ground when you look at the images. I didn’t want to make panoramic shots as it would make them look like typical landscape panoramas. I have decided on recording the emotional aspects of the spaces, what these plots represents to the people who use them.

What does all these mean to us? Is this about us losing our land to development of the world? This seems to be a rather ironic dilemma. Development advances civilisation but in this case does it mean that it is a good thing? With the population of the world projected to reach 9 billion by 2050, we will surely need more living and working spaces.

With a population of 5.5 million in a land area of 710 square kilometre and a estimated population density of 7,315 people per square kilometre, land reclamation is constantly happening in Singapore. Old buildings are also being torn down or repurposed for new and useful ventures. By the year 2030, the island state expects to increase its population to 6.9 million. With such an unprecedented growth, property prices are expected to soar, thereby increasing the development of the land. A migrant city since its founding, Singapore welcomes migrants to up its population.

Plot is a documentary project about land spaces in Singapore. It is a photographic record of plots of open land that remain untouched in the republic. Cemeteries, historical buildings, old rail roads, airports and barracks once stood in these plots before. Now vacated, they are ready for development. Many of these are plots already being canvassed and marked for development into public housing, hotels and multiplexes. They are often mistaken for park because the manicured grass but with no street furniture or amenities around, its easy to tell them apart. These plots are the last bit of rawness, the last bit of public land left in Singapore.