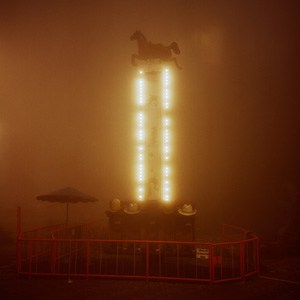 The world is going to end this year.

Or so says interpretations of the ancient Mayan calendar. For some this means the beginning of a new philosophical era, for others it marks the apocalyptic ending of our planet. Although dismissed by science, the end of the world is a compelling prophecy deeply embedded into popular consciousness, inspiring numerous narratives across time and culture. However it is not disaster in progress but rather the ominous calm before an unimaginable demise that Malaysian photographer, Eiffel Chong seizes upon in his first solo at Valentine Willie Fine Art. Presenting two bodies of work: A Matter of Life and Death and A Fragile Thing Called Man, Chong shares his obsessions with mortality and human excess by using landscape and objects to create an ominous vision of society.

A Matter of Life and Death has been an ongoing series for the artist since 2009. Visually drawn to the connection between space and place, he creates mysteries of silent isolation. After scrutiny and reflection, surreal narratives are then inferred through a careful choice of titles suggesting history, politics and states of collapse.

For A Fragile Thing Called Man, Chong used a Hasselblad camera to create dramatic miniaturised landscapes through a special technique called tilt shift, where the lens is moved in a certain way to create selective focus. As sites of leisure and daily life, each image could be from the viewpoint of a higher being looking down on mankind, judging our histories, frowning at how we have manipulated the world around us.

As a selection of visual short stories, Before the World Fell to Pieces is a deceptively poetic exhibition that belies a critical judgment of Mankind as an excessive and deteriorating civilisation. It speaks of the frailty of a society unaware of the last and final act of karmic retribution.