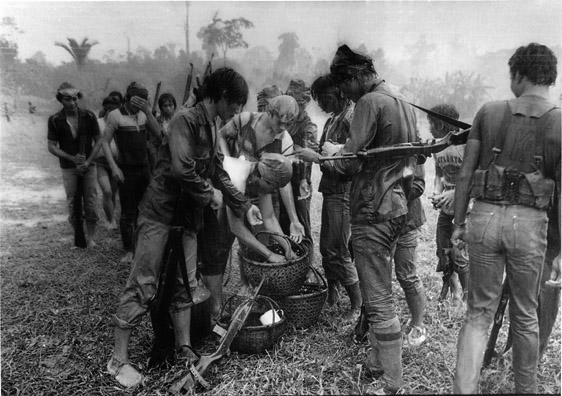 Alex Baluyut is the founding faculty member of the Diploma in Photojournalism programme at Ateneo de Manila University, and is most known for his book ‘Kasama’, a documentary of the New People’s Army of the Philippines photographed during the Marcos era with Lenny Limjoco. Alex is also a name on our Influential Asian Photographers list.

Here is an an excerpt* from a longer conversation with Alex Baluyut on his work and his new photo collective Quadro.

Philippines is a hot bed of documentary photography in the region. Wouldn’t you agree?

Alex Baluyut: Of course, but the provinces are under-reported.

What do you think of the scene now compared to the old days?

For me its exciting and lots of stuff going on. Actually I am energized by it all. The old days are just that the old days he he. I just wish the kids could get their work out.

I actually have your book Kasama in front of me now. Carlo Gabuco lent it to me. Do you know him?

Why is it so difficult to grab a hold of Filipino Photobooks? I can’t seem to find any.

Well, they come out rarely and far in between. You know funding and stuff.

Can you tell me more about Kasama?

It took me 8 years to get a second book out. Kasama was a collaboration work with Lenny Limjoco. Lenny was here at that time to finish a book which he could not finish so i told him let’s do a NPA book instead. He jumped at it. Lenny was like a legend here at that time. I had always wanted to meet him. He lived in the States. 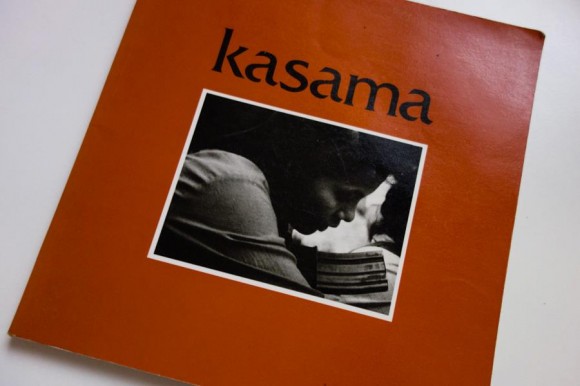 Kasama : a collection of photographs of the New People’s Army of the Philippines. Photographs by Lenny Limjoco and Alex Baluyut.

You were working in the Press then, right?

Yes, I was freelanceing by that time but I shot the material a few years earlier, before i met Lenny. I was stringing for the wires trying to get my act together.

How long did you shoot NPA (New People’s Army)?

I was about 28 or 29 at the time. I stayed four months with the rebels in what was probably the hardest regions… swampland. My feet were always with sores from the wetlands.

A student activist gave me the access. I jumped at it. Left AP and packed a big backpack, borrowed two cameras from Bullit Marquez and Romy Gacad. I used my seperation pay from AP 7ooo bucks. Hehe.

Haha. And how did the NPA guys take to you – sticking a camera in their faces?

They were cool. They never had it done before – embed a photographer. People in Mindanao are cool. So there, I lived out a dream. I was suprised to have even done it. Years later, Lenny came and that was that.

Were you sympathetic to their plight or was it just a matter of interest as a photographer?

Both. I had seen Susan Meiselas’ work and it inspired me to do this work.

Tell me more about the Susan inspiration.

Yes, I was working for AP and was really feeling very restricted to the wires kind of work, and I felt I had to cover the war first-hand. And Susan’s book just blew me away. Years later, I would meet her and we became friends.

How did that meeting come about?

Well, she covered the snowballing protest movement against Marcos and well, most of them passed by here in Manila. She was one of them. I was honored to meet that woman, that I can say. Then I met her again in Amsterdam during the awards days and she mentioned me in her lecture. I was honored.

What did she say?

Haha. She said that seeing Alex here has brought her full circle.

Did you actually work with her in any way?

No, I did not. And I am glad about that. Because it’s difficult when you do that. Hehe. It just wrecks it for the image of a person. Haha! So it’s good that it was that way. I remember the first time I talked to her, I had just got a good violent dispersal photo out in my paper at that time, and she said ‘oh, so you took that photo today. Good shot.’ Wohooo. I was in heaven. So there, that’s my story of Susan. Nice woman, and not pushy at all.

That’s what I heard too. Any other influences?

Yes, of couse. Eugene Smith was a great influence and the old Manila Times photographers. I greatly admired the Manila Times as a young boy. But that all ended when martial law came.

Was that what got you into photography in the first place?

Well, me and my brothers were into photography in the 1970s. My older brother Butch became a portrait photographer so I decided to get into Photojournalism.

My brothers were a great influence to me. My brother Butch was my master.

Doing the NPA story must have been a risk. I mean, you were covering the otherside.

Yes, it was. Those were scary times. Paranoia all the time. I dont know what the hell got me to doing it at all. I guess I felt it was my way of getting back at the Marcos regime. It took many years after Marcos left for me to shake off the paranoia.

Was the paranoia founded though, that is did you get into some trouble?

Well, somehow the target of the regime was writers not photographers. Hehe. So we got away with that stuff.

Why was that so? I would imagine the picture to be as powerful as the written word, no?

I guess they underestimated the power of photography. Hehe. It was photography really, that fueled the movement man.

Well, all those demonstration photos and rebel photos really got the people up in arms. I must say now I worked for the opposition paper Malaya and we were selling them like hotcakes. Most of the copies were sold out by the end of the day, and photography was at the forefront. They called us the comitted photographers.

Were you working with Editors back then or did you guys pretty much have free reign?

Oh, we just let the access come in daily and covered them all. Demos/strikes/rebels and fact finding missions they were called. These missions investigated human rights issues in the provinces. It was really a heady time. You just kept going.

What about on the financial front? Or was everything just about getting those pictures out?

We streched our innards as best as we could. Ulcers were common. Luis Liwanag and I would compete daily for the best photos. Hehe.

So that’s how you two bonded? You’re the older one right?

Yeah, we were the bad boys. Hehe. And yes, only by a few years. He was the more talented though. I was just reckless and passionate.

Did you ever just go out into the streets and shoot street like what Luis appears to be doing a lot now.

Yes, we would go out and just shoot. Mostly in the slums. But being with the news we were more tied to the news also. We liked to experiment some though. We started to use open flash in our coverages with blurs and such. We wanted to push the bounderies. Then I left for Mindanao. And everyone was taken back.

No one had done it before. Everyone thought me crazy as hell, especially my own family. Mindanao was so under-reported. Mindanao was the challenge for all of us at that time. And I think one of the reasons I became a photojournalist was to cover the war in Mindanao.

As an outsider, I am assuming there are certain subjects that may be ‘touchy’ to certain people.

Well, yes. But as I said they underestimated the power of photography and maybe that is why I left an indelible mark to some people with my work.

What about the Mindanao today?

Still undercovered. But improving. Some really comitted photographers down there, like Keith Bakonco and his wife Ruby.

Curiously, when you were shooting NPA up in the mountains, were you just focused on getting images or were you shooting, developing, checking, editing, shooting?

Hell man, I was just trying to keep my feet dry. Just shooting. I sent most of the film back to Manila for Bullit and Romy to process.

How many rolls did you come back with?

Was the Book always in sight or was that an afterthought?

At that point, shit, I did not know what i was doing. Really, I just wanted to get it over with. The book only came much later. I was scared to publish during the Marcos time.

Plus I had a photo of a execution. So I was afraid of the Left. My friends also. Hehe.

So when it came out, how was it recieved?

Well, some people today say it was really a benchmark. I had no idea it was going to be like that man. I was burnt out and full of paranoia. And I was taking a lot of speed and drinking a lot. So I was a mess man.

Yes, I heard you like your ‘drink’. Was that borne out of your paranoia?

Not as much now. And yes, it was post stress syndrome. But I did not know it at the time. Remember when I came back, a lot of other stuff was going on and now at that time, the goverment started to crack down on photographers of sorts. I don’t think I will ever get over the conflict photography stuff I guess. I think I am sort of good at it.

So you are saying you are more chill now?

Haha, is it the mountains or the age?

Alex Baluyut: Both the mountain and age. And my back and knees hurt.

*excerpts and transcripts have been edited for length and clarity.

Breathing Different Air – An Interview with Chang Chao-Tang 張照堂
“Making images is maybe 10 percent of my work.” Dayanita Singh
Against The Dying Of Light, by Veejay Villafranca