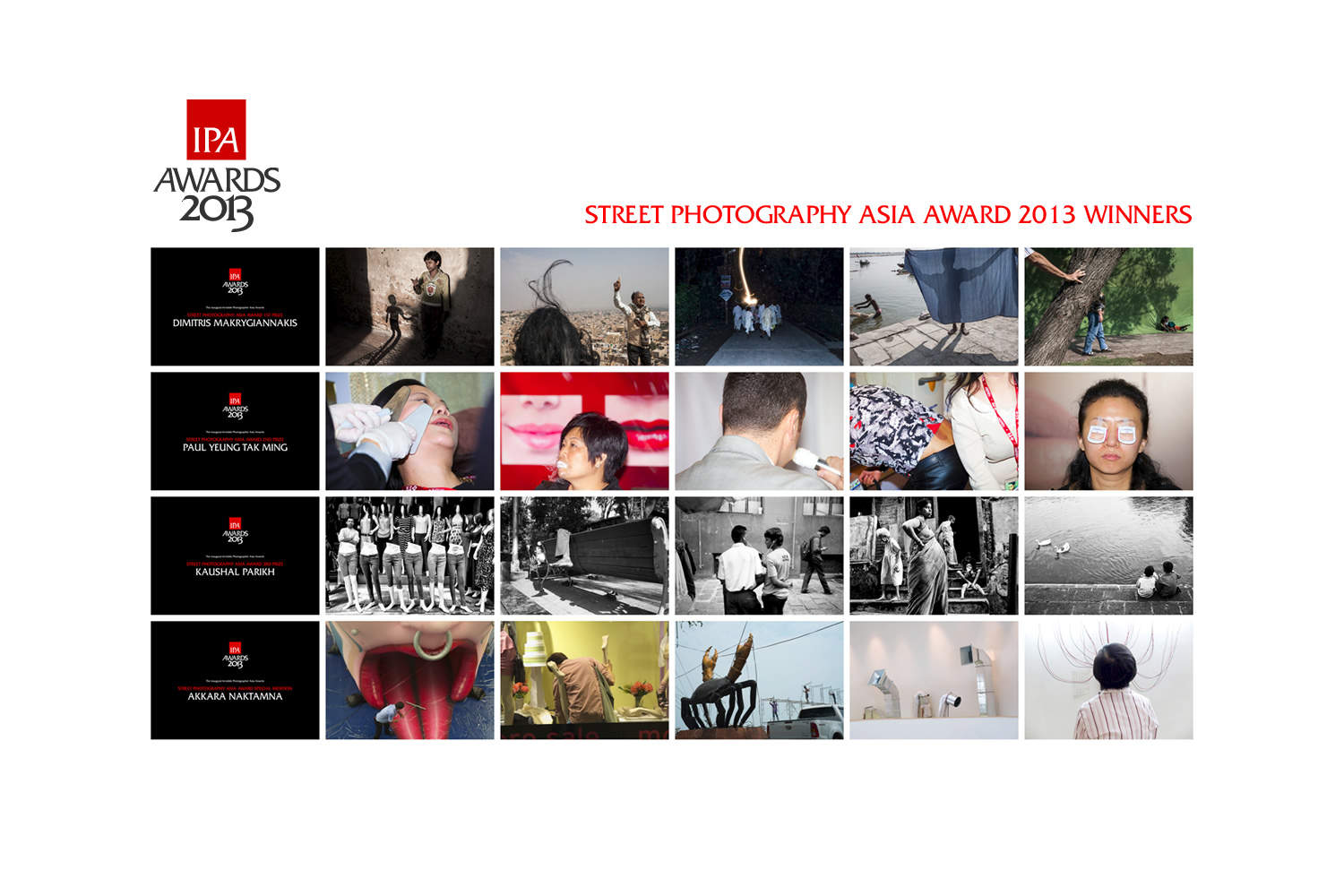 We are proud to announce the winners of our Street Photography Asia Award in the inaugural Invisible Photographer Asia Awards 2013.

Congratulations to the following winners!

Biography
I am born in 1979, originally from Greece, living in Sweden the last 9 years. I work as a medical doctor. I am interested in photography and in particular street photography since almost 3 years. I love walking around in the streets and capture moments that will never exist again.

I have a huge interest in travelling and photographing in Asia, mostly in India but have also been in Thailand, Burma, Laos, Vietnam, Cambodia, Nepal and Qatar. I think that Asian countries give many photographic opportunities. Of course it is difficult to see beyond the touristic when first arriving, this is why I keep coming back and spend long periods, especially in India, to become more and more familiar with the country and its people.

I spent from December 2011 until now more than 8 months in those countries, 5 of those months in India.

Biography
Paul Yeung Tak-ming (b.1978, Hong Kong) graduated from MA in Image and Communication (Photography) at Goldsmiths College, London in 2011. Yeung embarked on his profession in photojournalism for 10 years after graduated from BA of Journalism and Communication in Hong Kong 2000. He was elected to be chairman of the Hong Kong Press Photographers Association (2007, 2008). He was former part-time lecturer in Photojournalism at the Chinese University of Hong Kong and Photo-documentary in Chu Hai College of Higher Education. He had received more than 20 awards presented by The Newspaper Society of Hong Kong and Hong Kong Press Photographers Association. He was selected as one of the 14 “Hong Kong New Generation Photographers” at the Hong Kong Photography Festival 2010. He co-operates with various photographers to publish independent photography publications “Mahjong” and “Not accord with…” He participated in “Count to 12”, a part of “The Road to 2012” project commissioned by and exhibited in the National Portrait Gallery, London (2011).

Biography
Kaushal Parikh is a travel/documentary/street photographer based in Mumbai India.  An ex-banker turned photographer, Kaushal loves to travel, but he prefers to focus his lens on a gritty street rather than an exotic beach.  According to him street photography is the most honest and raw genre of photography – it is an accurate a documentation of life.

Biography
Born in Bangkok, Thailand in 1979, I learned to photograph from travel, photo book and internet. I realized that we might don’t photograph just in a holiday or celebrate events because we can photograph everyday, everywhere, by street photography.

In my opinion, street photography is not just a life picture but it is everything which relates to people and public place. Street photography can be a human or something else, on the street, under the sea or in the sky. My photos show that the ordinary thing can transform to something surreal and funny.

Now I work in Bangkok and shoot mainly street photography.

A big thanks to our panel of judges Ying Tang, Erik Prasetya and Che’ Ahmad Azhar. Some words from our Judges….

“Congratulations to all winners and finalists of IPA Street Photography Asia Award 2013. As one of the judges, my selection for the winners and finalists were based on two criteria. Firstly, their ability to produce fresh ideas in depicting the banality of daily life in public spaces. Their skills to strive beyond recording or simply showing what had happened. The pictures that stimulate intellectual and emotional response in our minds and hearts. Secondly, the consistency in presenting their pictures as a series – their competency to unite all pictures by having a harmonious underlying structure of visual design and aesthetics.”
Che’ Ahmad Azhar, IPA Street Photography Asia Award 2013 Judge.

“I am very flattered to be part of this competition again this year. This year I have seen very interesting bodies of work from dozens of candidates. Some work involved a slight documentary approach, some have very interesting concepts behind it. Street photography to me is not just simple documentation. It can also be used by the photographer himself or herself to pursue particular interests. I am happy to see a lot different styles and different work on the street level.”
Ying Tang, IPA Street Photography Asia Award 2013 Judge.

“IPA’s competition and award will give a huge contribution to the development of photography in general and street photography in particular now and in the future. I’m happy to be part of the jury. IPA opens and secures an area in which journalism, documentaries or fashion do not cultivate. Photojournalism works more on high-tension events, documentaries on objective information, fashion-photography on beauties. IPA cultivates street-photography which works on banal realities yet subtle and open to subjective interpretations. This area gives chances to new photographers―even those with simple technology―as the subjects they are working with are (can be) in their own backyards; the compositions of their pictures are based on their affinity and personal relation with the subjects. While other “genres” are often based on ‘assignments’, most street photos are personal and independent undertakings worthy to be nurtured as they can open up our minds to new aesthetic and understanding.”
Erik Prasetya, IPA Street Photography Asia Award 2013 Judge.

Congratulations once again to all our other Finalists!