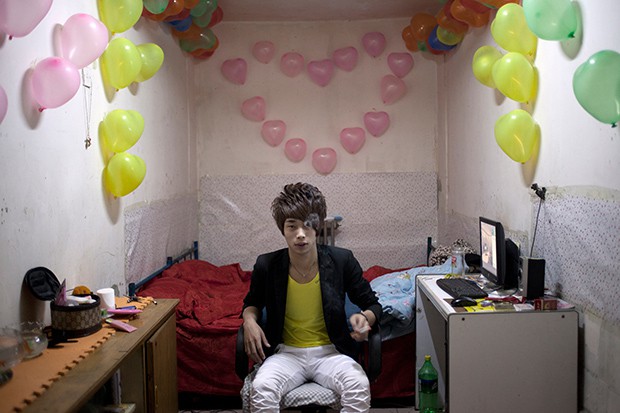 “Rat Tribe” explores the lives of low-waged migrant workers who live underground in Beijing and make up one-third of the city’s estimated 20 million people. These waiters, karaoke hostesses, hairdressers, chefs, security guards, domestic workers and kitchen helpers are the backbone of Beijing’s service industry. But they have been unkindly dubbed the “rat tribe” for making a home in Beijing’s 6,000 basements and air raid shelters — about one-third of the city’s underground space.

The evening sun sits low in the smoggy Beijing sky. Beneath a staid, maroon apartment block, Jiang Ying, 24, is stirring from her bed after having slept through the day. Day is night and night is day anyway, in the window-less world she inhabits three floors below ground.

Pint-sized and spiky-haired, Jiang Ying is among an estimated one million migrant workers who live beneath this city. Like millions of Chinese who come from across the country with dreams of making it big in the capital, she had travelled to Beijing from her native Inner Mongolia three years ago, and now works as at a hip bar in the heart of Beijing’s nightclub district. But even so, she can barely make ends meet.

Faced with sky-high property prices, living underground is often the only option for this legion of low-waged migrant workers, who make up one-third of Beijing’s estimated 20 million people.

Waiters, karaoke hostesses, hairdressers, chefs, security guards, domestic workers and kitchen helpers, these basement dwellers are the backbone of Beijing’s service industry. But they have been unkindly dubbed the “rat tribe” for making a home in Beijing’s 6,000 basements and air raid shelters — about one-third of the city’s underground space.

They pay monthly rents of 300 to 700 yuan ($50 to $110) for partitioned rooms of seven to eight square meters, or sometimes, a closet-like space barely wider than a single bed. Some 50 to 100 rooms often share a single bathroom and several toilet cubicles. A chilly draft filters through the tunnels, which are also often dank and moldy in the summers.

But it may now be a matter of time before the basement dwellers face eviction. The government, which had leased the basements out for use since the 1990s, and even liberalized rules in 2004 to make them more accessible and hugely popular as homes to migrant workers, is clamping down.

In mid-December of 2010, the authorities issued new regulations contradicting earlier ones, effectively stopping basement leases from being renewed. Over the next three years, the authorities will gradually shutter the underground homes, which are now deemed “unsafe, dirty and chaotic,” a civil defense officer said.

That might improve Beijing’s image, but doesn’t help the low-wage migrants. Sooner or later then, Jiang Ying and her counterparts will have to move out — and up, or simply go home. For now, the basements of Beijing hold the hopes and dreams of many migrants who seek their fortune in the capital.

To me, they tell the broader story of a China on the move, of the world’s biggest tide of migration, and of a generational shift to an urban income and lifestyle. Curious about this underworld, I started photographing it in 2010. If I went into it hoping to document the tough and musty lives these migrants lead, I’ve also been inspired by their spunky fighting spirit and life-affirming aspirations.

As Zhuang Qiuli, 25, a pedicurist, puts it: “There is no difference between me and the people who live in the posh condominium above. We wear the same clothes and have the same hairstyles. The only difference is we cannot see the sun. “In a few years, when I have money, I will also live upstairs.”