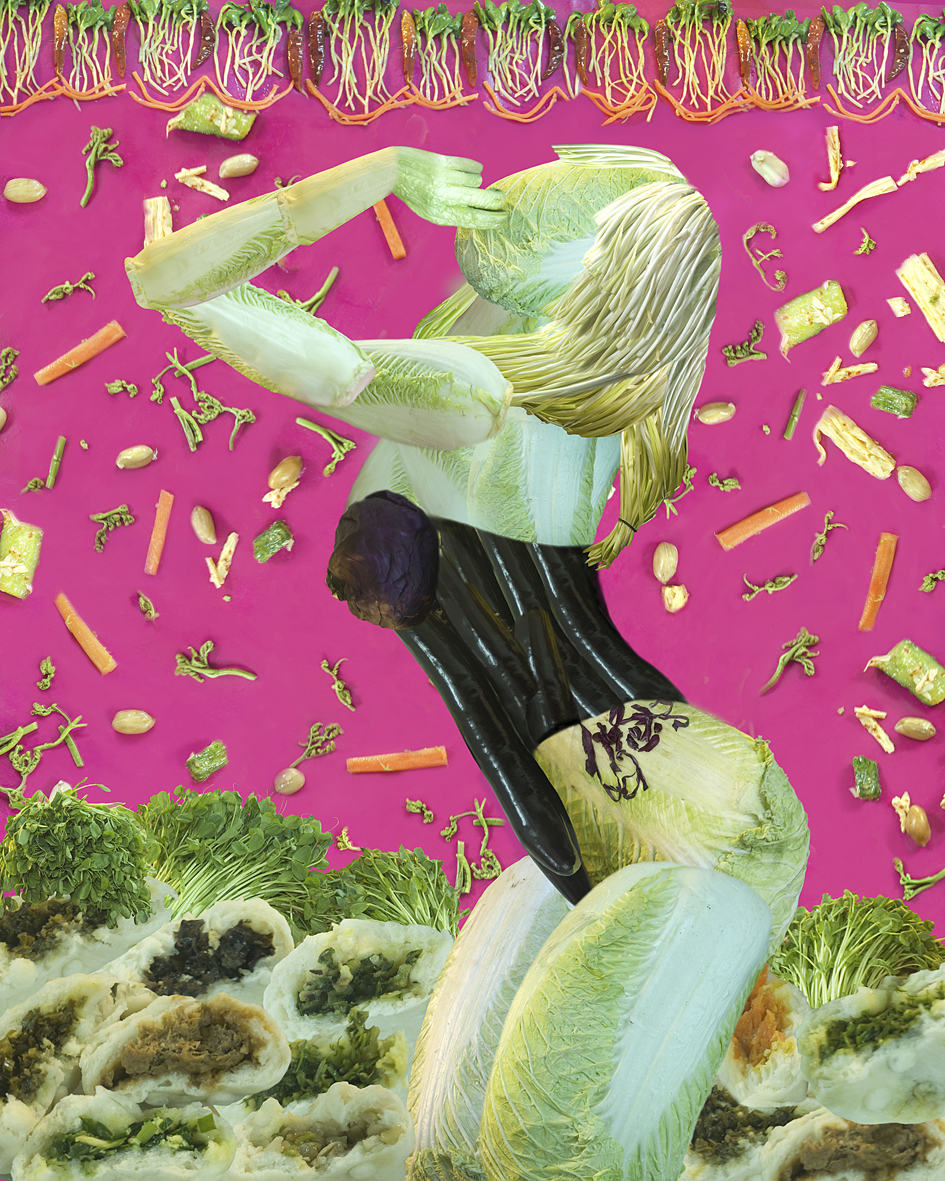 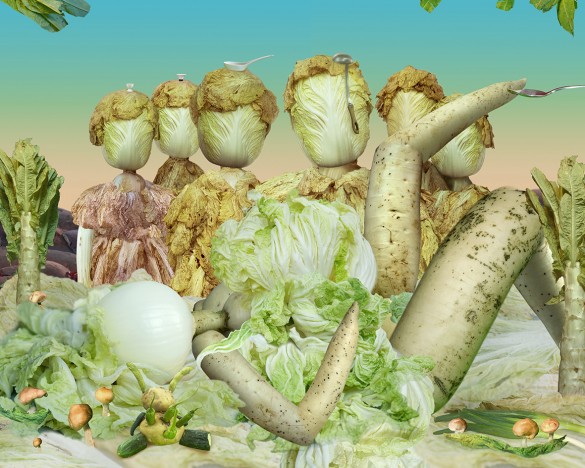 Humans cannot change their skin color, race, or other innate characteristics. Cabbage is the same way; the most common cabbage in Beijing is light yellow or green; you will never find a blue or hot pink cabbage at the market. My task, then, is to make a common cabbage look less like a common cabbage. For a long time, photography could not extricate itself from beautiful women. This conventional topic, discussed around the world for generations, is both desirable and depressing, exciting and awesome.

Cabbage + beautiful women = ? Beautiful women can make the most common cabbage sexy and alluring. Out of boredom, I did a series of experiments one day and transformed the light green cabbage into the lustrous colors of oil paintings. I also observed its various transparent effects under water, when backlit, and under direct light, indirect light, and a mixture of warm and cold light. I wanted to find a new way to use cabbage, because the fresh bright colors suggesting healthy food are so annoyingly stereotyped, such that bright pictures of vegetables have become mere embellishments for our monotonous lives. Considering the fixed colors and shapes of the vegetable I had chosen, I knew that this series would not be as colorful as “The Vegetable Museum.”

This series is more philosophical, reflecting the contrast between our inner loneliness and the colorful external world, as well as the contrast between the isolation of dancing by yourself and the sense of mission generated by the struggle for achievement in society. This project is harder than the last one because I chose to use only one vegetable. Although I have created three vegetable-based series, I wanted to take one more step with this series. The vegetables no longer matter; creativity and ideas are more important, so I had to think more deeply about this series. 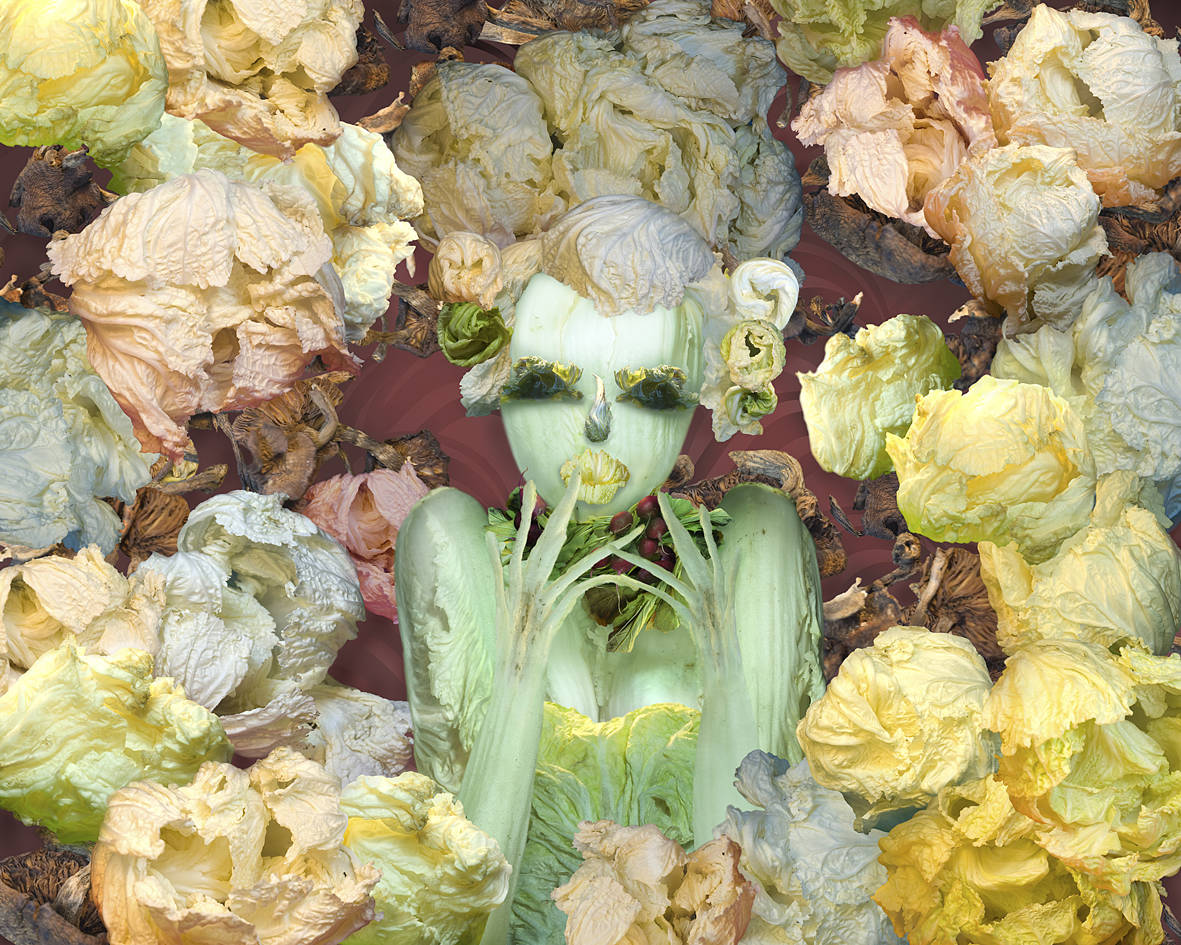 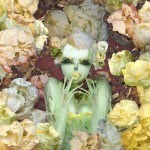 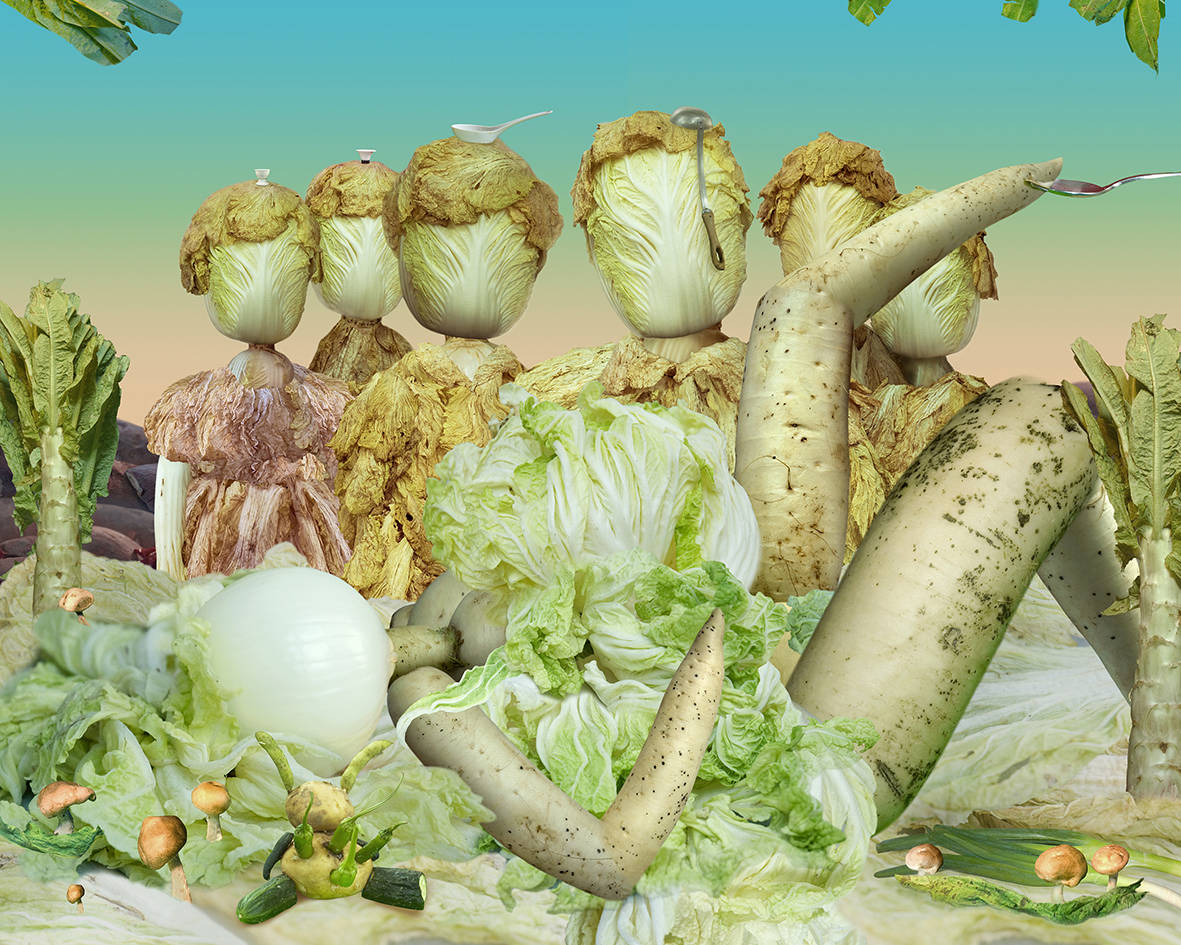 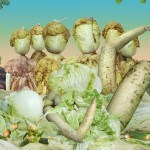 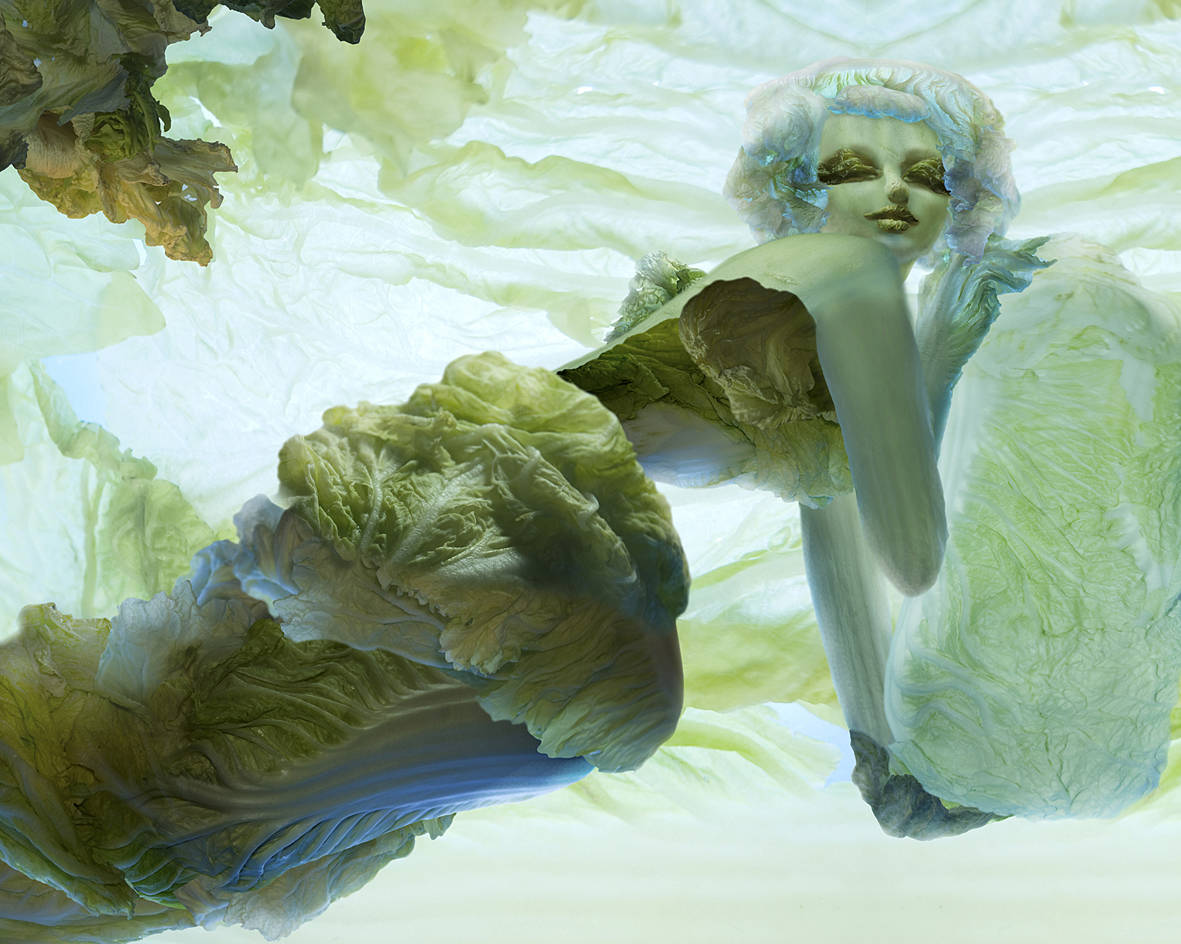 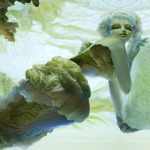 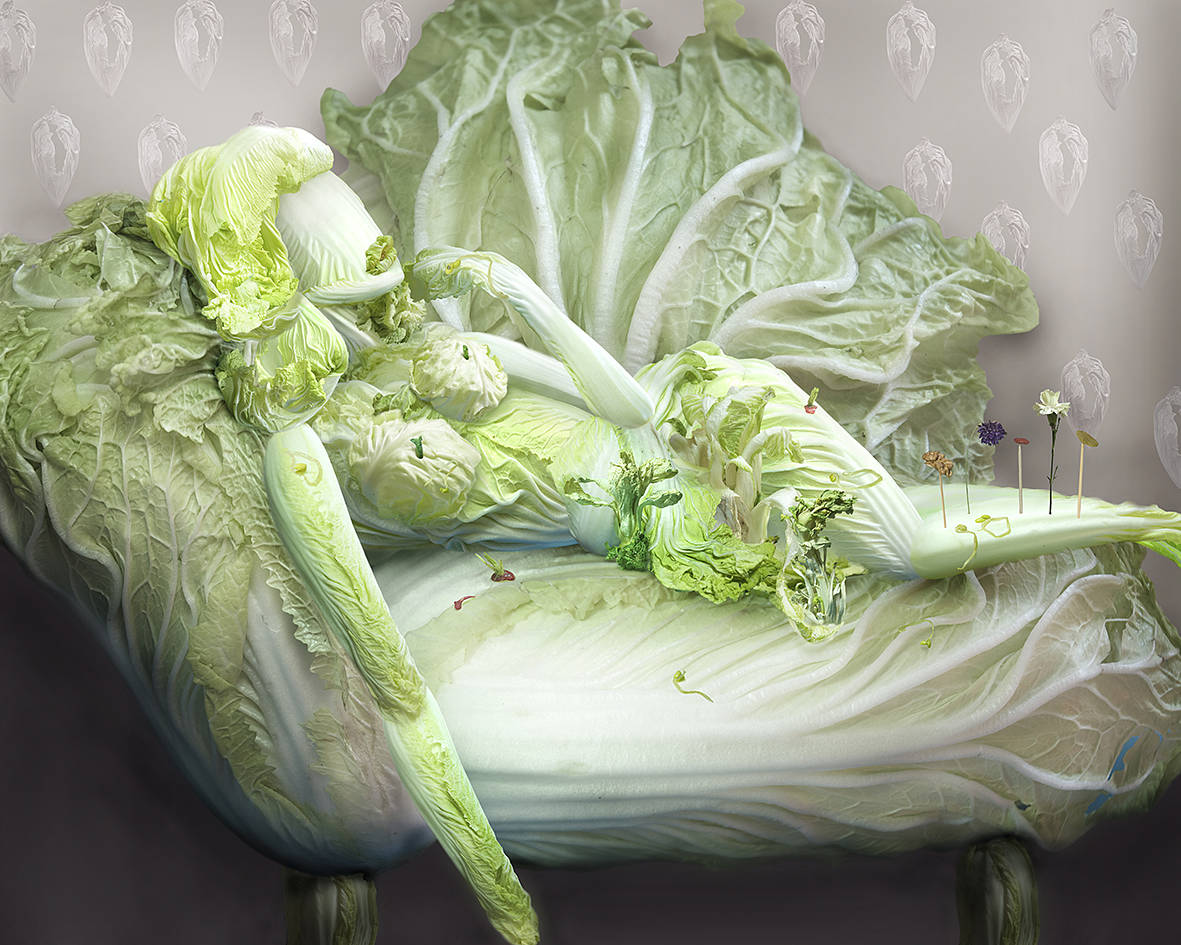 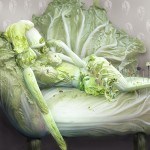 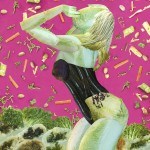 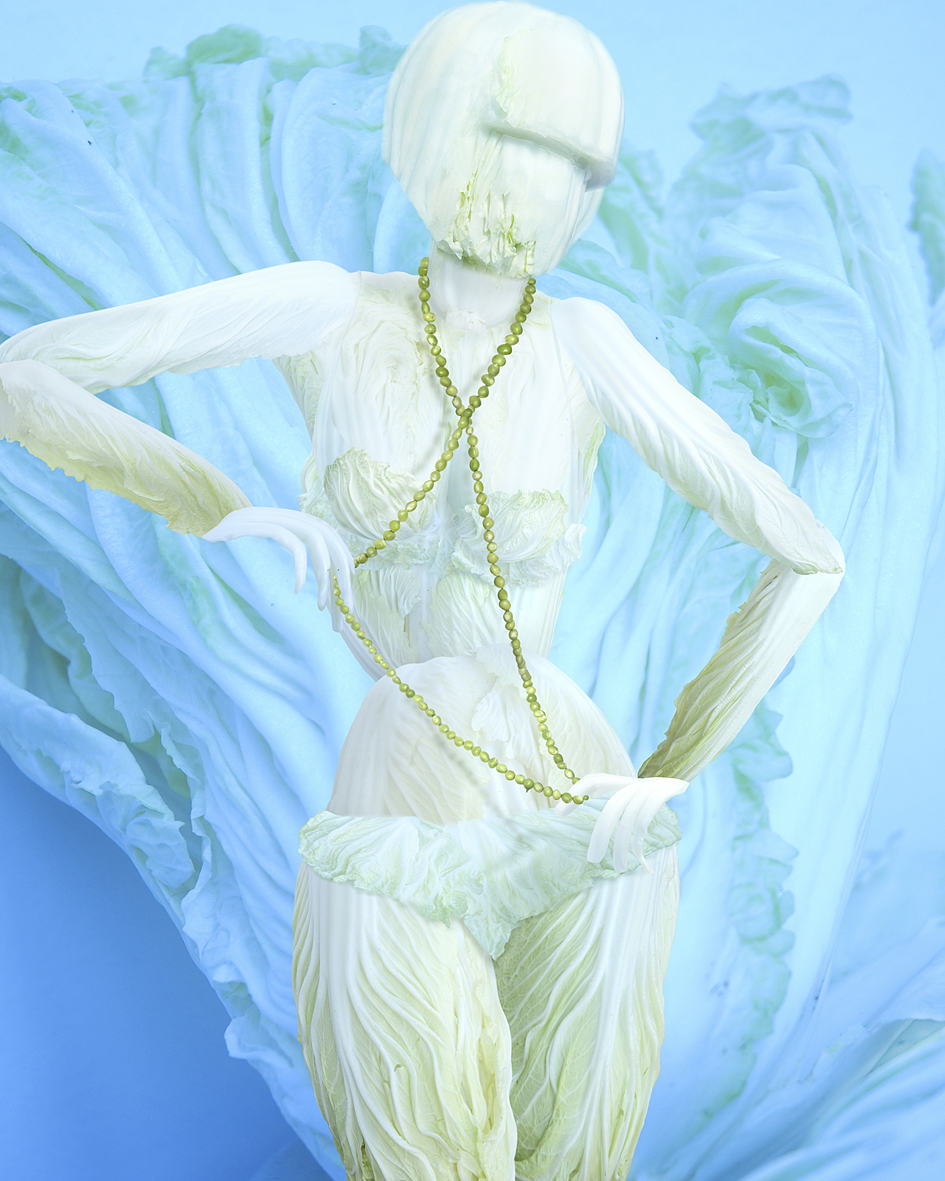 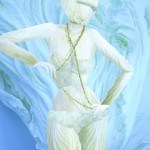 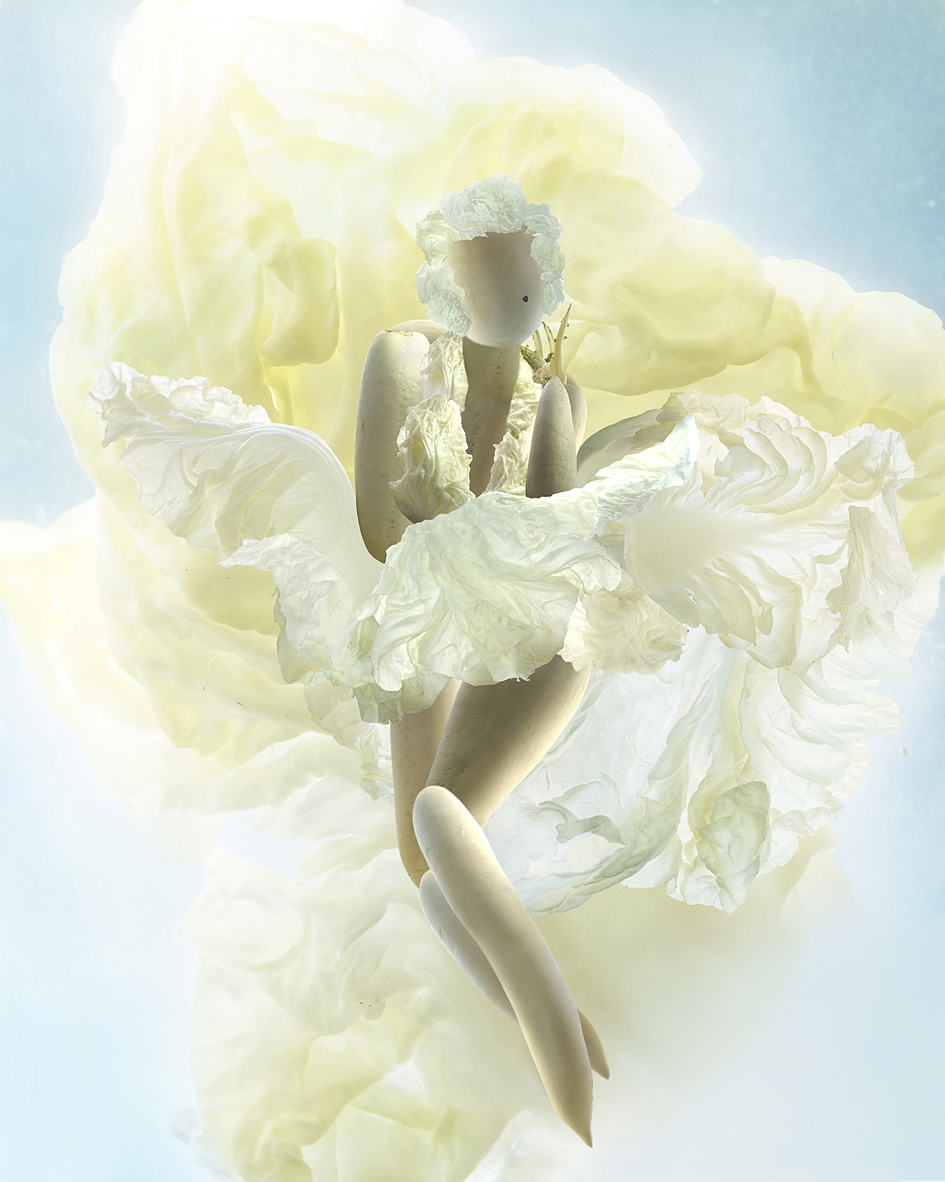 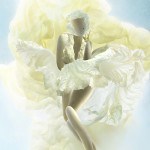 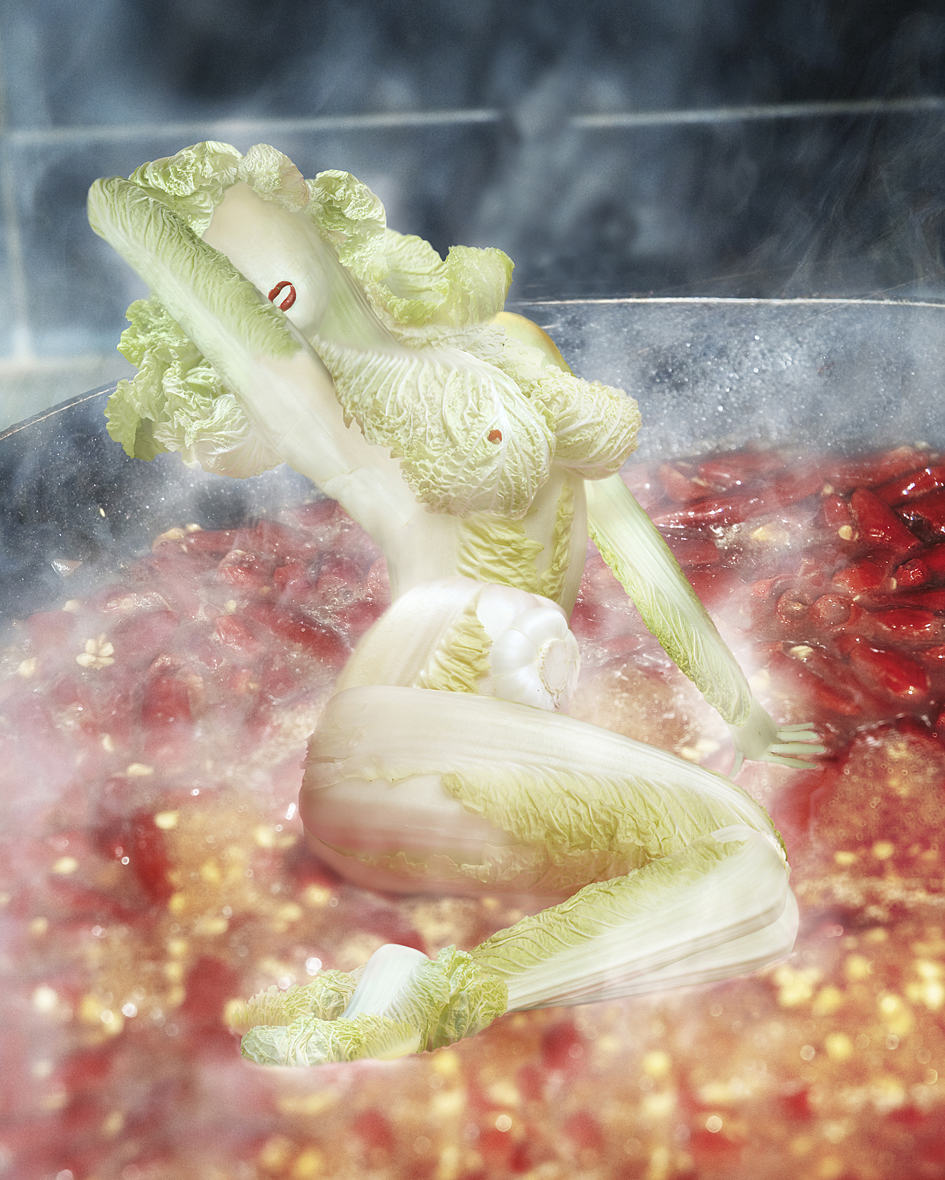 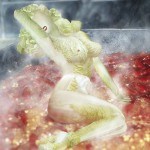 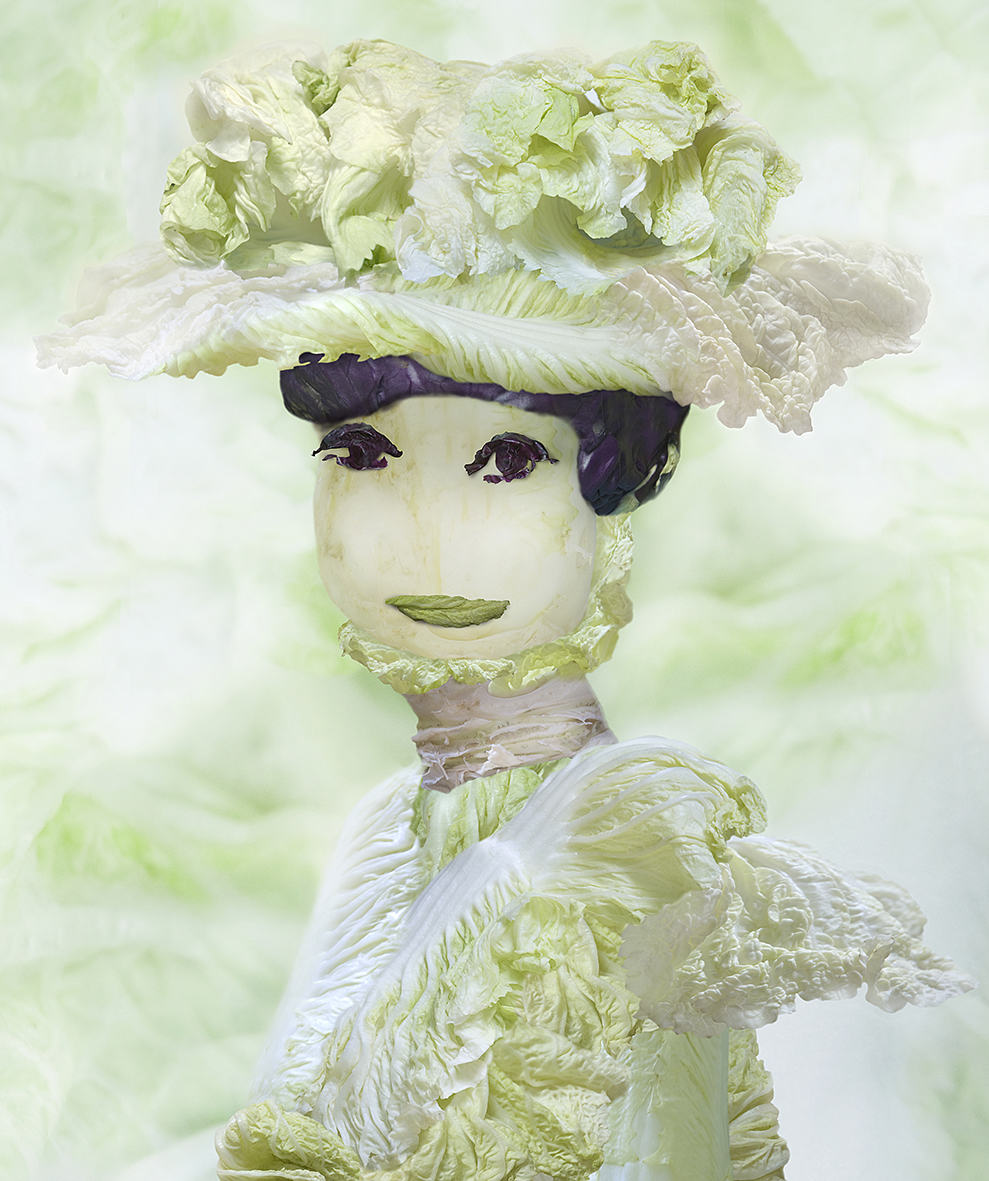 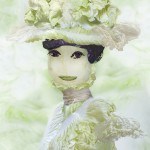 For six months, I only had one cabbage in my studio. I replaced the old one with a fresh one, and sometimes I kept both. Some I kept so long that they began to molder. I guess this is how they made the fermented vegetables I ate growing up. I used artificial light and natural light at different times of day, photographing both fresh and wilting cabbages so as to observe their changing textures. These changes also generate different narratives and moods. Although “Fantasies in Chinese Cabbage” is quiet and restrained, “Nana” in the hotpot is happy. She seems to burn with desire in the spicy hot pot soup. In a similar way, our lives contain various types of tragicomedies in an endless cycle. In order to reflect various aspects of life, I have endeavored to create many different types of beautiful women, but this grand task can never be completed, because of countless varieties of beauties and cabbages.

I hope that, after you have seen “Fantasies in Chinese Cabbage,” when you see kimchi, dry pot baby cabbage, tossed cabbage hearts, or pickled cabbage with vermicelli, you will recall these ladies: Nana, Coco, Mimi, Lili, Loli, Oo, Ben, Aima, An, Sara…