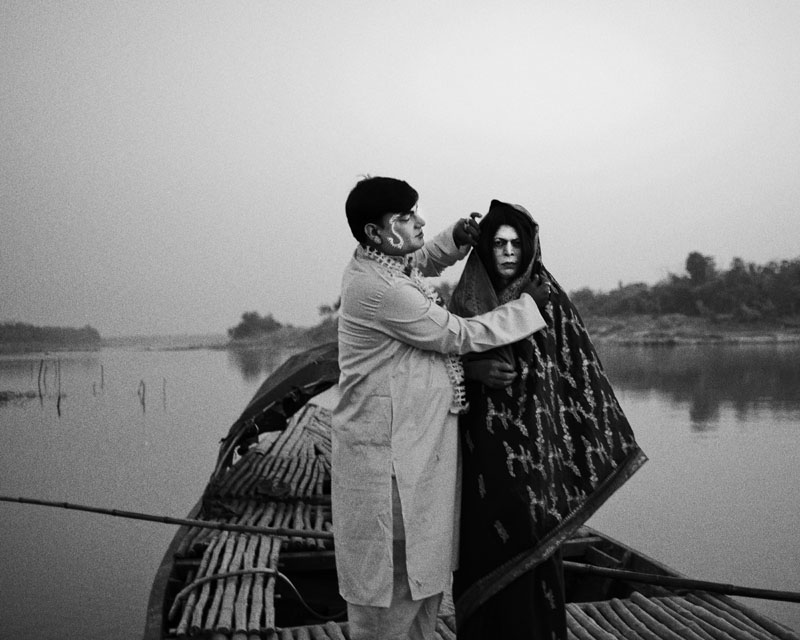 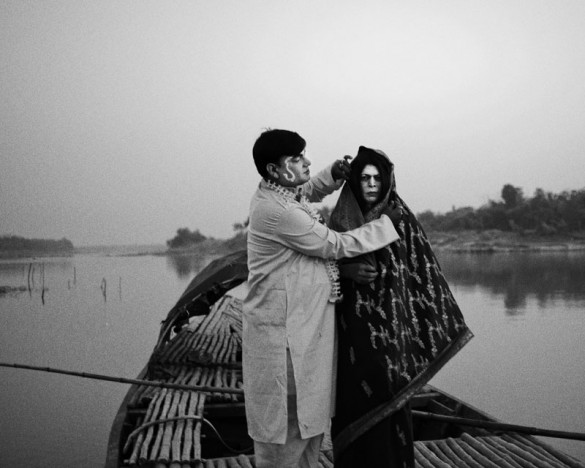 Rabin Kumar Majhi(51yrs) and Anukul Ghosh(63 yrs) are posing for portrait as a newly married couple. Anukul Ghosh used to play female character in 1970-80.Now he is completely retired from Jatra.Pathra, India-2013

I knew I had to work on this project when my uncle retired from the Jatra and joined a railway factory, hoping to do what he could not as an artiste – earn a living. I began photographing artistes who are now unemployed but were once gigantic figures of the Jatra.

Dating back to the 16th century, the Jatra is a famous folk theatre form of Bengal, employing dialogue, monologue, songs and instrumental music to tell stories. Jatrapala, as the plays are called, are enacted on wooden stages without any barriers between the actors and the audience, facilitating direct communication. The plots vary from Indian mythology and historical incidents to something more contemporary and based on social issues.

The partition of India had a major impact on Jatra as artistes in the newly-formed East Pakistan (later Bangladesh), a Muslim-majority country, discontinued to enact Hindu religious folk tales such as Devithakurani, Krisnalila, Shiveromritopaan, Kongsobodh, Kaliya Daman, etc. On the other side of the border, artistes in West Bengal stopped playing Muslim characters such as Siraj ud-Daulah, Shah Jahan, Akbar, etc. The advent of cinema and TV in the 60s and 70s blew a deadly blow to the theatre art form. In 2001, over 300 Jatra companies employed over 20,000 people but their situation has come to forcing them to often offer free performances.

Helped by my uncle, I have been peeping into the daily lives of these artistes for the last eight months and trying to get a trip to the past of the Jatra ashor with them for the briefest glimpses.