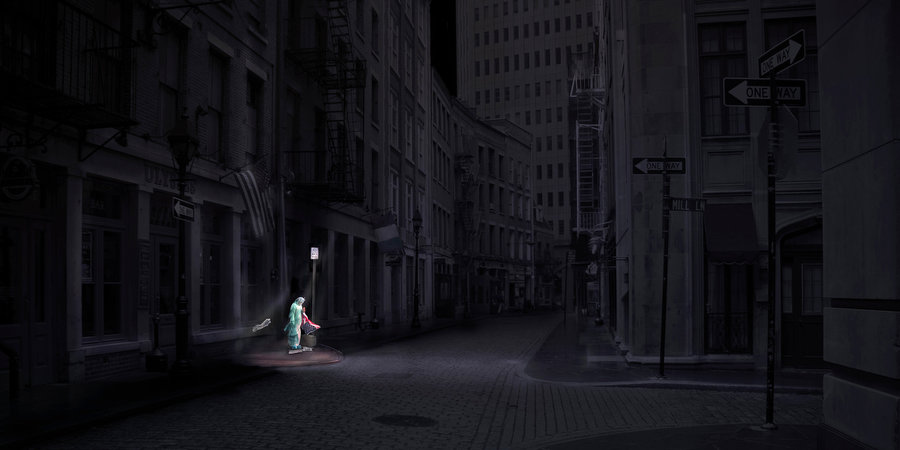 One of the most awarded young artist working with photography in Singapore at the moment is Sarah Choo, currently pursuing her MFA in Fine Art Media at the Slade School of Art, University College London.

Sarah was a finalist in the Sovereign Asian Art Prize 2014. In 2013, she was awarded the ICON De Martell Cordon Bleu Photography Award and Kwek Leng Joo Prize of Excellence in Still Photography Award. A recipient of the Lee Kuan Yew Gold Medal Award, Sarah also represented Singapore at Photo London 2015.

Who are you as an artist and what is your work about?

Well, I see myself as a Multidisciplinary Artist who works predominantly with painting, photography and moving images. Focusing on the relationship between space and time, my work often depicts identifiable moments and characters within contemporary society. Intentionally constructed, I seek to reflect upon social and cultural norms.

In my earlier works, I was interested in the boundaries between photography and painting. I was trained as a painter before and then realised that I was referencing (a lot) through my photographs. While painting, I kept asking myself if it was necessary for me to be painting an image if i was merely replicating a photograph. Hence, I decided to take up photography to look at what a photograph represents and what I am able to achieve through an alternative way of image making.

Most of my pieces reflect upon the predominance of social alienation and isolation in cities. With my earlier works, they tend to be more reflective of the urban life in Singapore; my recent pieces however, are more inclined towards reflecting on the same presence of loneliness amongst individuals across various cities. – London, New York and Paris. 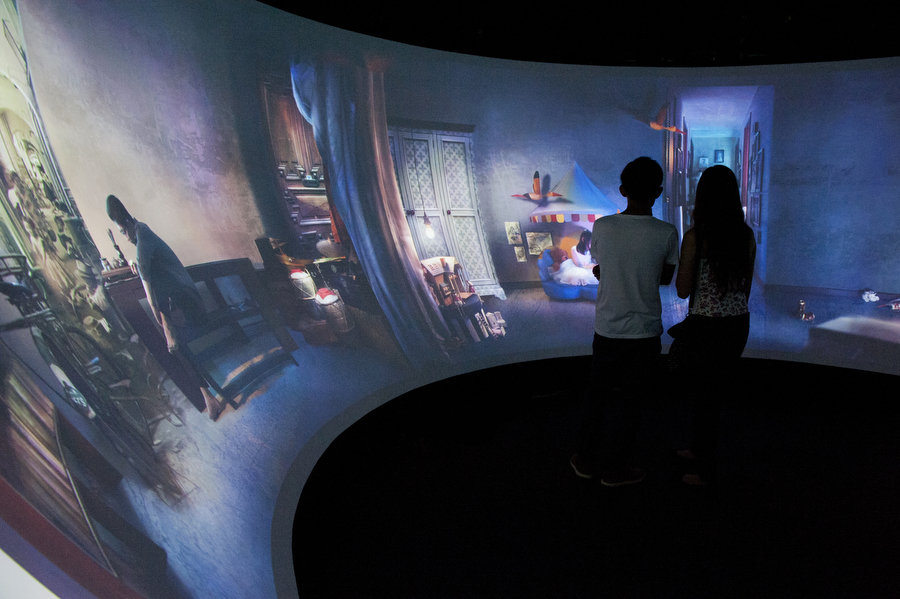 In what ways do you think your background in painting informs your work with photography?

I suppose the act of cutting up my photographs and then reconstructing the separate images together is an intuitive method in my image making process – which is motivated by the way I make sense of a scene when I paint . I do think that my background in painting plays a significant part in my practice as I often draw from its visual and compositional aspects. Also, painting over ( both physically and digitally) my images and models is an instinctive gesture which results in the painterly quality which my pieces possess.

Having spoken about how painting influences the visual aspects of my practice, I believe that the act of painting has also contributed to my conceptual/thought processes. When I first started working on photorealistic paintings; I was often questioning the need and reasons to why I made such close references to photographs. A fair amount of time and effort would be taken to meticulously construct a scene which I want to paint. The ‘set’ would then be photographed and printed on photo quality paper.  I would do my best to painstakingly replicate the printed image on a canvas. Hence, I began asking myself; what is the difference between a painting and photograph? In today’s context, is one medium more credible than the other? Is there a boundary between both mediums and is it even necessary for such distinguished definitions?

I think this probably sparked off an interest in looking at in-betweens and grey areas in terms of mediums, themes. ( document vs stage, photo vs painting, still vs moving, reality vs fiction etc.. )

Social alienation and isolation are themes that many artists and photographers explore. How do you differentiate your own enquiry in this regard, if at all?

Solitude has become a significant issue in today’s society. This is ironic when contrasted against a highly populated cities. How is it possible, that despite being surrounded by people, we are so much alone? I am not seeking to differentiate my work in terms of the themes I choose to reflect upon. In one way or another, everything has been done before. I believe that as individuals, though we might all live rather separate lives, we still go through rather similar experiences. Hence, social alienation /isolation is a broad theme which many art practitioners and myself are intrigued by.

Most of my pieces express my reflections on personal experiences. I don’t particularly seek to speak about specific experiences and particular narratives but prefer to draw on the emotions and mood of these situations and then reinterpret and represent them to my viewers. I’ve always admired writers and poets who are able to verbally translate their inner thoughts into words so accurately that their accounts become revealing and disconcertingly moving. I suppose this is what I hope to achieve with my images; for the work to be compelling such that it encourages the viewers to ask questions, to interpret and not take what they see at face value.

We’re curious about your choice to transit away from commentary on Singapore specifically, to cities in general. Tell us more. What is your motivation? Is it interest or strategy?

Well, as mentioned before; my works are accounts of my immediate experience and daily encounters. I have not deliberately transited away from commentary on any specific country; I often reflecting upon my surrounding environment. In my earlier pieces, most of my images depict my struggle with and search for identity; i was intrigued by gender, familial expectations and cultural norms. Subsequently, my interest in reflecting upon solitude amidst my home country, sparked off investigations in the domestic lives of Singaporeans; which led to several pieces such as The Hidden Dimension, Possessions and Between Us (to name a few).

Having been living in a different city for the past 2 years, my recent art pieces are hence influenced by my observations of what I see, feel and hear in different places which I’ve visited.

However, that is of course, not to say that I have removed myself from making works which comment on Singaporean culture. In fact, quite recently, I was inspired by mundane moments which I observed at the HDB void decks when I was back in Singapore. I suppose one begins to take note of particular details when one revisits a familiar environment with a fresh set of eyes? Hence, I decided to work on a project with Filmmaker Mathis Choo and Sound Artist Teo Weiyong titled Waiting for the Elevator; commissioned by The Visual Arts Esplanade . It is a Multimedia Installation that depicts a composite of documented events, projected across the Esplanade Tunnel. I wanted to reinterpret my observations of these individuals at void decks across Singapore and reflect upon the social purposes of these sheltered environments.

I believe I will continue responding to the space and culture which I am immersed in, and am interested to see where the next project will lead me. 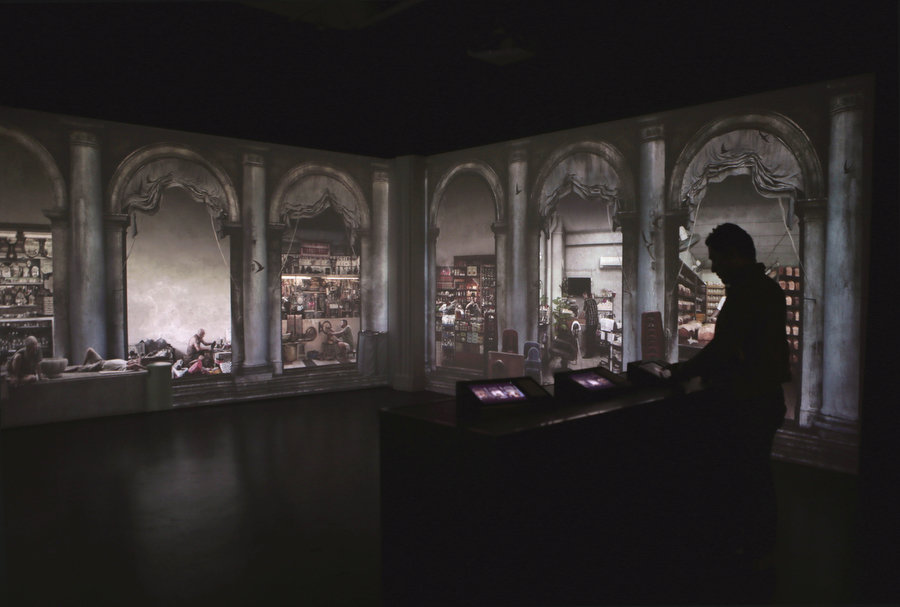 Do you think about the ‘artist signature’ or brand and how crucial is that to your career as an artist?

I do think that such ‘style’ is present in all artworks and pieces (visual arts, writings, performing arts etc). It is merely more obvious in some than in others.

Also, I have always been fascinated by the representation of self; and believe that this is reflected both through my works and identity as an artist.

A signature style and branding contributes to the image and persona of any individuals. We are constantly perceived and judged by how we portray and carry ourselves, and an artist identity is vital in creating an impression.

However, beyond such branding, is the passion for why we do what we do. What is most important to me is the drive and courage to push oneself beyond boundaries.

As with everything else; ambition, handwork and perseverance, is key to doing well .

Now that you’ve graduated from ADM, NTU and currently pursuing your MFA in London. Can you tell us a bit about the similarities and differences in art education in both Singapore and London?

I have always believed that Education, particularly in the Arts; comprises of both academic rigour from instituitions as well as through life experiences (learning and being influenced from one’s culture and background).

For starters, both Singapore and London have rather differing cultures- Singapore is a much younger country compared to London. Hence, in terms of being able to reflect upon our history and ‘culture’, we do have quite a journey to take. Also, because of the clash of both Eastern and Western influences/upbringing in a multicultural hub, I believe that has thus contributed to much discussions on the Art Scene in Singapore being ‘too conservative’ and perhaps ‘not as liberal’ as in other countries such as London.

I suppose I will only point out one key observation and takeaway in my time away from Singapore (given that there are many points to discuss); and that is that the Arts Education in Europe and the States, adopt a more independent approach in learning.

There is a lot of research on the part of students and most learning takes place through students’ initiative rather than from directly acquiring information from professors. There is a distinct difference in the students’  attitudes and drive- I suppose this is because there is an emphasis in process based learning. Despite the lack of funding (both private and national) in other countries, ideas and projects are often generated by students themselves through discussions in studios .

One encouraging similarity across many countries though, is the emphasis on the relevance of Arts appreciation to all individuals- whether or not they are in the creative industry. It is pertinent to cultivate both art practitioners and art patrons so as to allow for a culturally rich and sustainable Art scene; and it is heartening to see such attempts being made in Singapore. It has been introspective to have been given the opportunity to experience learning both in and out of Singapore and I am looking forward to contributing and to doing my part in Singapore’s Education system.