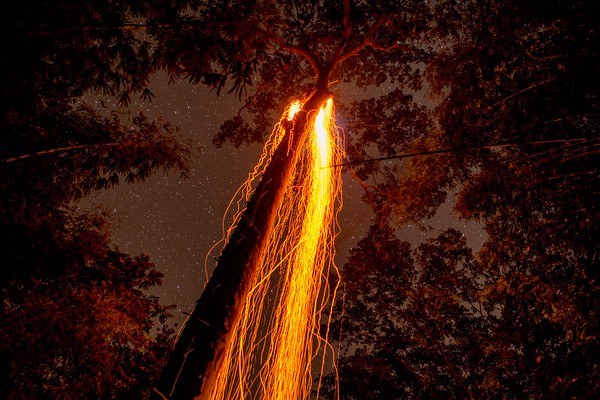 During moonless nights in between mid of February to end of March, a group of local of men enter the rainforest of Greatest Ulu Muda Forest complex (GUMFC) located at north of Malaysia, near the Thailand border.

It is home to the tropical rainforest’s tallest tree, the tualang (Koompasia excelsa), which hosts the hives of the giant honey bee (Apis dorsata).  For a few weeks during the months, they have to put aside their day job for them to be in the wilds of Ulu Muda for them to harvest gold nectar. Those men are traditional honey hunter, inherit the occupation from their forefather.

Those honey hunters is master of knowledge in “man, bees and the associated flora-fauna in the tropical rainforests” and retained their cultural elements which is respecting the nature. Thus, despite hunting for honey, they still maintaining ecological stability compare to modern honey hunters who only driven by economics.

The collection process begins with the construction of a makeshift ladder from the ground level up to the honeycombs. While the ladder is constructed during the day, the honey collection itself only occurs during moonless nights. This is to ensure that there is no other source of light except for the glowing embers from the traditional torches which are used to distract the bees from attacking the honey collectors. Other rituals include the chanting of a mantra before the start of the honey gathering process to ‘sooth’ the angry bees, and the avoidance of the usage of metal tools. Following this, knifes used are therefore made from bone, ladders from wood and collecting pails from leather, instead of the conventional steel or aluminum.

Asiatic giant honey bee will arrive in GUMFC between November to mid December and leave by the end of March or April. No one knows why or even where they go or come from but when the time arrived they will nesting on the same trees every year. The giant honey bee believed able to travel up to 160km and migrate to avoid the monsoon rains and death of floral resources. Living in big group, each colony numbering 30000 to 50000 individuals and for a tree might up to be a home for 60 to 120 colonies.  They are play a big role to maintain the ecosystem of rainforest by pollinating around 50 to 70 percents of the rainforest when they suck nectar from 180 from more than 180 species of flowering plant. Without their present, trees in the rainforest not able to reproduce. Therefore, sustainable method such as practised by those honey hunter in harvesting the honey are important to ensure those bees are coming back in future.