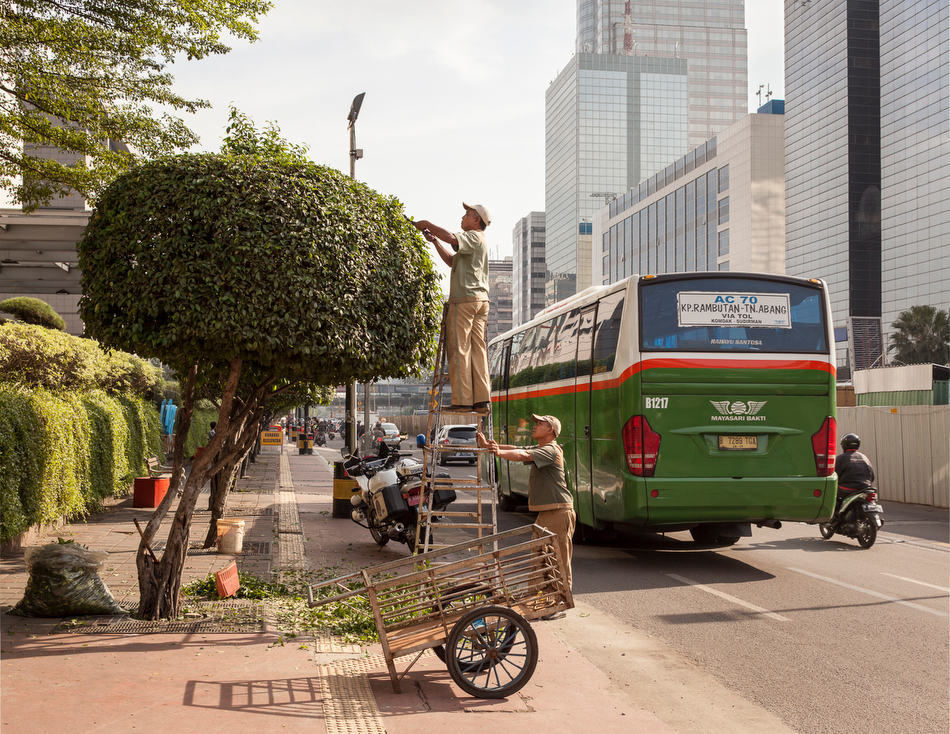 Jakarta is one of the biggest and fastest growing cities in the world with over thirty million people living in its greater metropolitan area. Its rapid growth in the last fifty years has not occurred without its problems, as I noticed the first time I arrived there in February 2014.

By then I had been living in the neighbouring city-state of Singapore for over two years and had become accustomed to the comforts and regularisation of its public facilities and services. Singapore is safe, convenient and easy to live in, but also heavily planned and predictable. Jakarta, seemed to be a different place altogether; anarchic, and unregulated. During my first visit I had no particular long-term plan, only the intention of starting a photographic project. But soon, after I started wandering around, I noticed that Jakartans had produced creative improvised strategies to temporarily solve the shortcomings and problems of the city that beset them every day. Not solving problems for good but merely as they arise, one at a time, until the next one raises its head.

Isidro Ramirez is a Spanish photographer who, after 20 years spent living, working and studying in the UK, is now based in Singapore. Alongside developing his practice as a contemporary urban photographer, Ramirez now also lectures at Temasek Polytechnic. Ramirez’s works have been exhibited widely in major cities across Europe and the USA, including Barcelona, Bogota, Vienna, Berlin, New York and Los Angeles.  Ramirez is a member of the Association of Urban Photographers, an international collective focusing on aspects of urban life in their work.