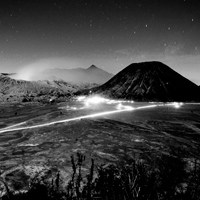 In this APWS Spotlight bi-weekly series, Jessica Lim presents work from previous participants of the Angkor Photo Workshops
and finds out what they have been up to.

Men, Mountains and The Sea

Divided by 17,000 island and located in the Pacific Ring of Fire, Indonesia is home for more than 150 active volcanoes and distinctly marked by a coastline spans over 80,000 km. This project documents an ongoing history of people and communities whose life affected by two major entities for Indonesians, the mountains and the sea.

Rony Zakaria studied photography at Antara Gallery of Photojournalism and completed a fellowship at Ateneo de Manila University. In 2008 and 2009, he received two photographic grants from FAO and Mochtar Lubis Award to pursuit his personal projects. Zakaria’s works have been featured in photo festivals such as Chobimela International Photo Festival in Bangladesh and exhibitions in Jakarta, Pattaya, Rome, Marseille and Taipei. His work has also been published in various publications, including Time Asia, The Wall Street Journal Asia, BBC Indonesia, Monocle, Asian Geographic, Tempo and The Jakarta Post. He is based in Jakarta, Indonesia.

What gave you the inspiration for ‘Men, Mountains and The Sea’?

I like being in the mountains, I always love all the times I went for a hiking trip to a mountain. There was always a sense of peace but also excitement. I guess that influenced me to come to these mountains.

When I was in Yogyakarta, I hiked to this active volcano, Mt. Merapi. It’s the most active volcano in Indonesia. It was a very interesting trip for me personally. Afterwards, I kept coming back to Yogyakarta and starting to document the life in the slopes of Merapi and its surroundings. From there, I tried to find similar places like Merapi for me to visit, feel and photograph.

Do you personally live, or grew up, near a mountain or a sea?

I live in the city, but practically in every city in Indonesia there’s a mountain or a sea nearby.

What is the most important thing to you in your work?

That I believe in my work, that what I document represent not only what I see but what I feel.

Do you think the way you work has changed since you first began photography?

Yes, I think that’s the process of learning. My values change as I learn and progress more in life as a human being. It affects how I see, accept and express things, including how I do my photography. It’s not about being better I guess, it’s about being able to know more of yourself, what you want, and what you don’t want.

What are some things you learnt during the Angkor Photo Workshops in 2007 that shaped or influenced the way you worked?

I think it was wonderful to meet other peer photographers from all across Asia.  That was the most important thing, to meet my fellow peers. It made me realise that I’m not alone.

I’ve Never Told You Before, by Yu Yu Myint Than
Men, Mountains and The Sea, by Rony Zakaria
Invisible Interview: Ian Teh