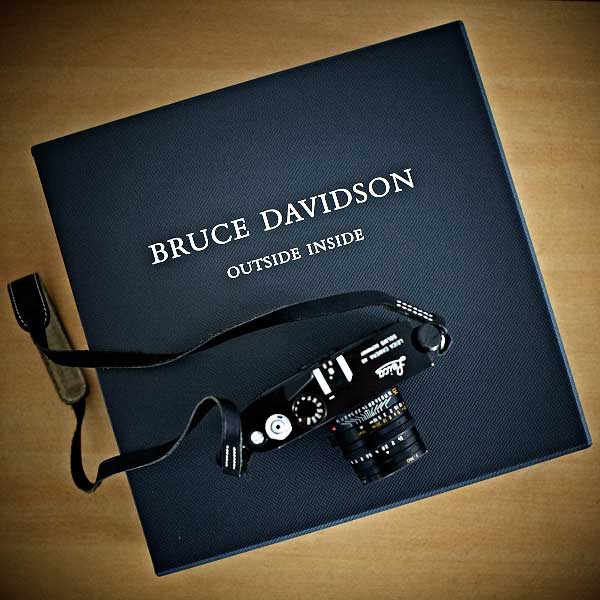 Through fifty years in photography, I have entered worlds in transition, seen people isolated, abused, abandoned, and invisible. I work out of a frame of mind that is constantly changing, challenging perceptions and prejudices. I view my work as a series. I often find myself an outsider on the inside discovering beauty and meaning in the most desperate of situations. ~Bruce Davidson

Bruce Davidson is one of my favorite documentary photographers. One of the first photography books I bought when I started getting interested in photography was the reissue of his 1970 book East 100th Street. Since then, I have come across some of his other bodies of work (e.g. his New York Subway, Central Park, Civil Rights Movement and England/Scotland series) either through his books or the internet. He continues to be a great source of inspiration for me in the area of immersive photo documentary.

Last year, Steidl released a massive 3 volume box set of his photographs called Outside Inside. The box set consists of 3 hardcover books housed in a slipcase and altogether total 944 pages with 834 tritone plates that cover his photography work from 1954 to 2009. The whole set weighs a whopping 9kg! The following images will give you a good idea of the size of the books (my camera added in for scale and size comparison). The first image shows the box that it was packaged in. 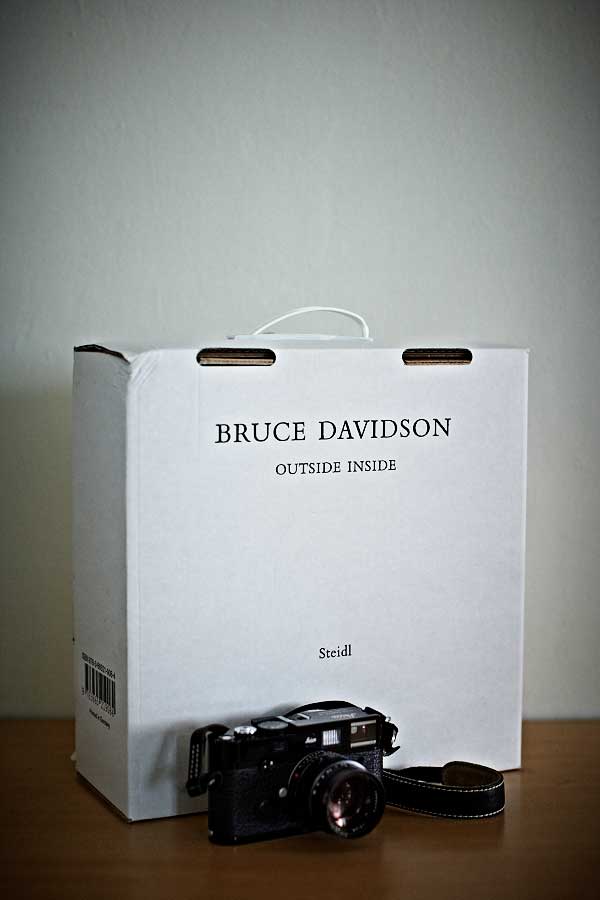 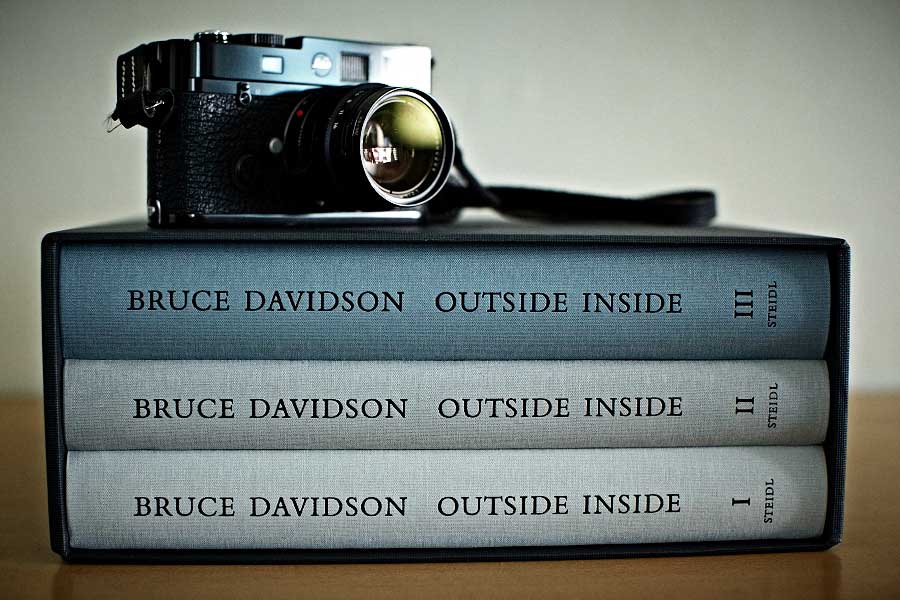 Over the past month, I have spent many quiet mornings slowly going through Volume I. Rather than waiting till I finish going through all 3 volumes, I decided to review each volume one at a time. This post focuses on Volume I of Outside Inside. 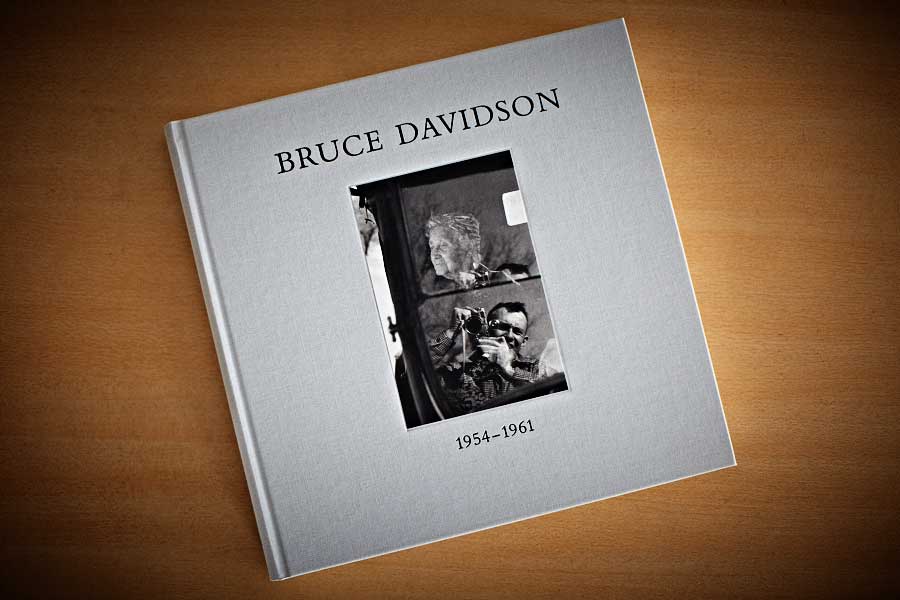 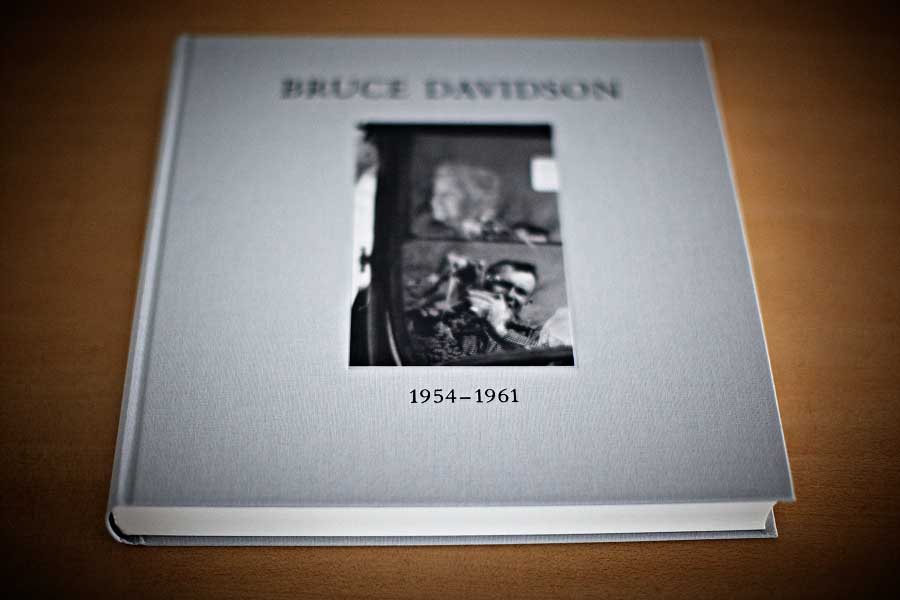 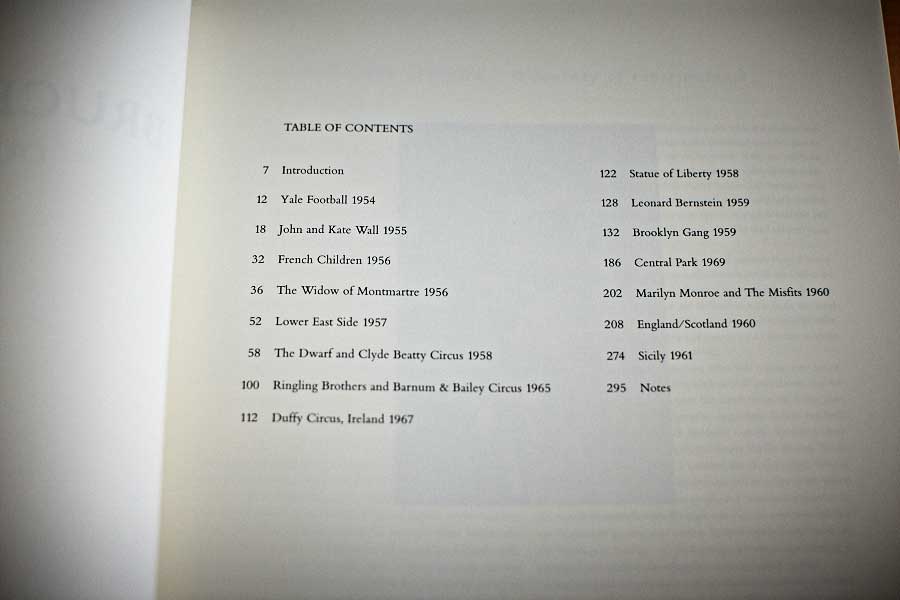 Volume I (300 pages with 264 B&W photographs) covers Davidson’s work from 1954 to 1961. His photographs in Volume I harken back to a time when mega-pixels and sharpness weren’t everything. Many images in the book are not pin sharp, some have people out of focus, and some are downright blurry due to camera shake. But the images speak for themselves powerfully and are a joy to view. They invoke emotions and linger in one’s mind long after the book has been put down. Many of his images are strong on their own but so much stronger when combined with others and presented as a series. 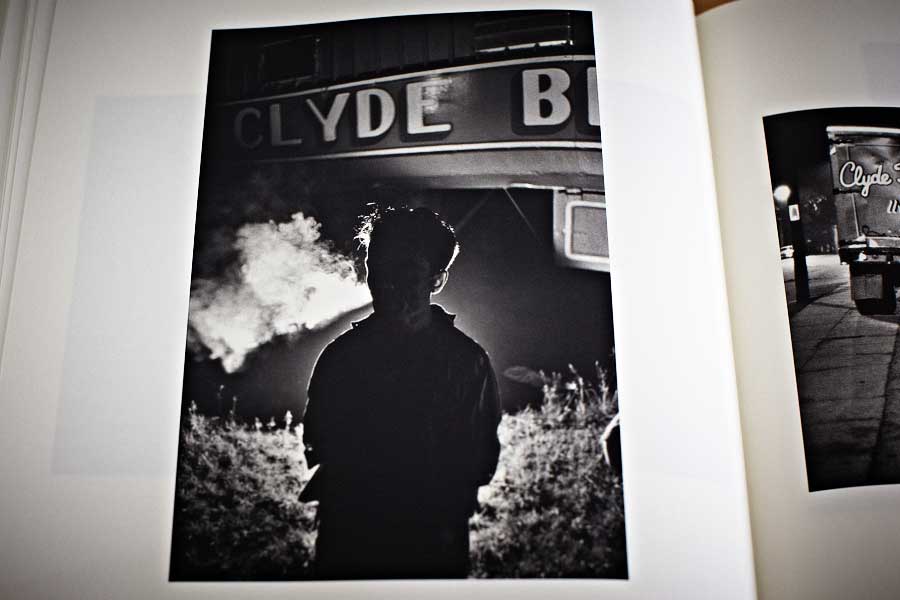 One really outstanding and beautiful series of images included in Volume I is “John and Kate Wall 1955“. While serving in the military in Arizona, Davidson came across an elderly couple while hitchhiking. John Wall was 94 and his wife Kate was 79. That chance meeting resulted in Davidson staying with them on and off for several weekends. At the end of the Volume I, he writes short notes on each series of work. He says about John and Kate, “… it was the gentle way they cared for one another, isolated in the forbidding desert and rugged mountains, that drew me in closer“. The tenderness between John and Kate, as well as the feeling of them being isolated from everything else comes across strongly in the series of just 13 images. Davidson really manages to capture the essence of the people he is photographing. 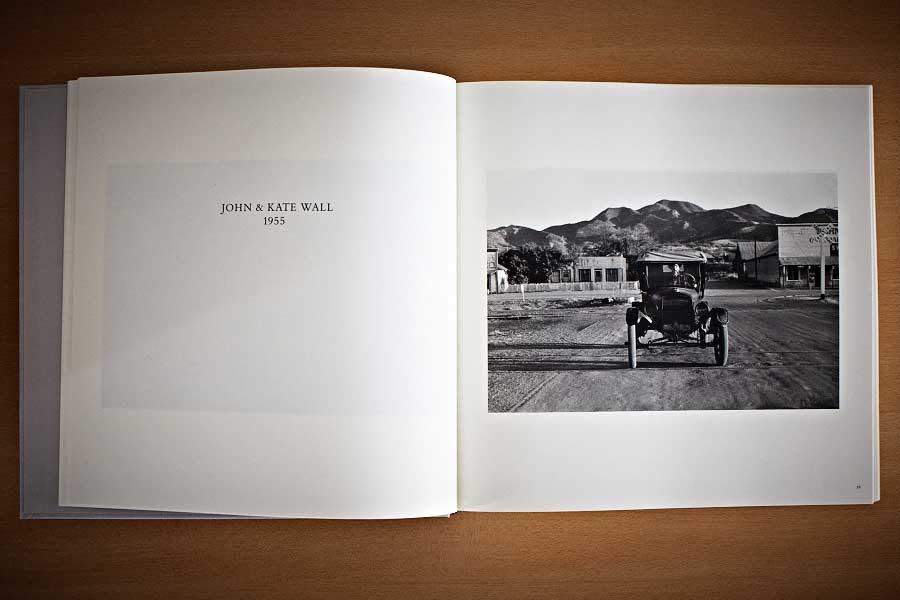 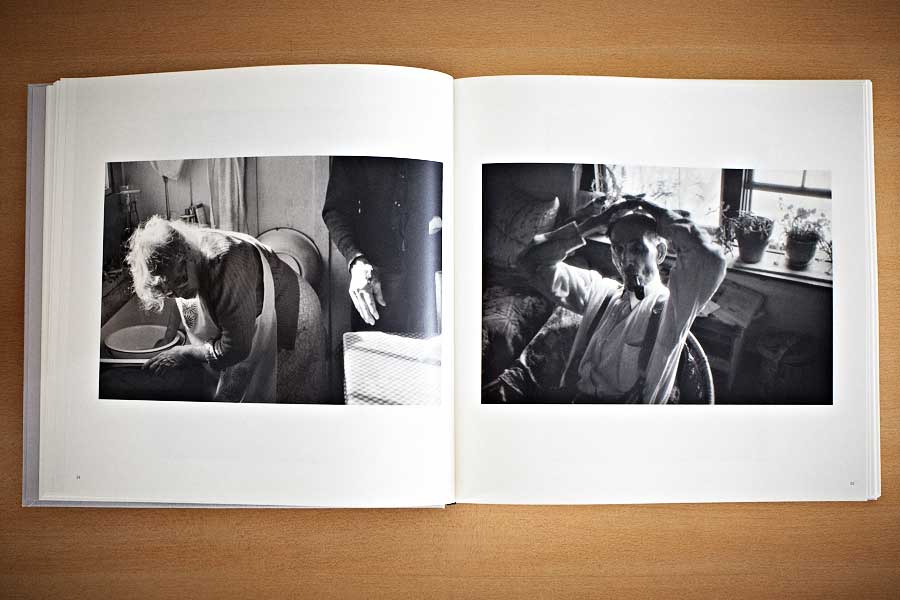 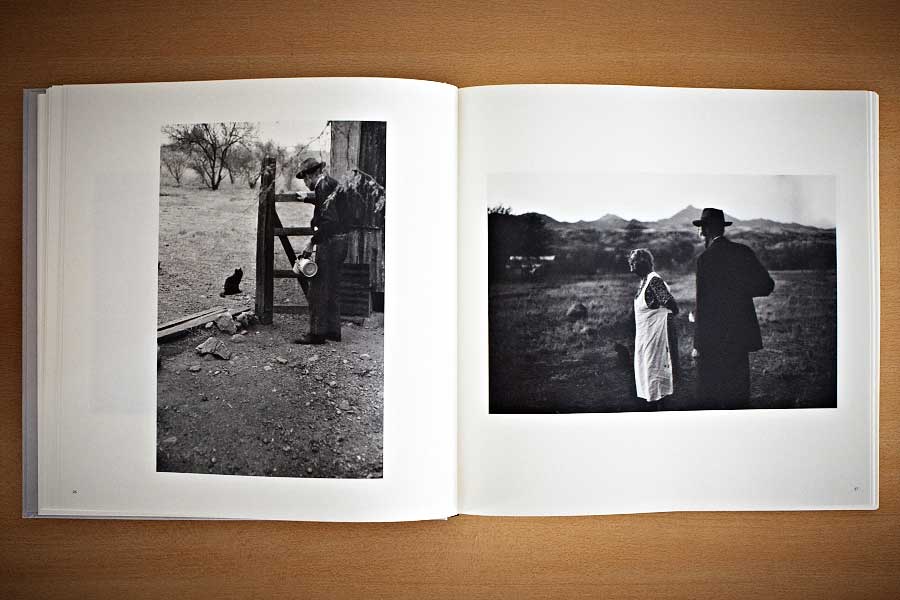 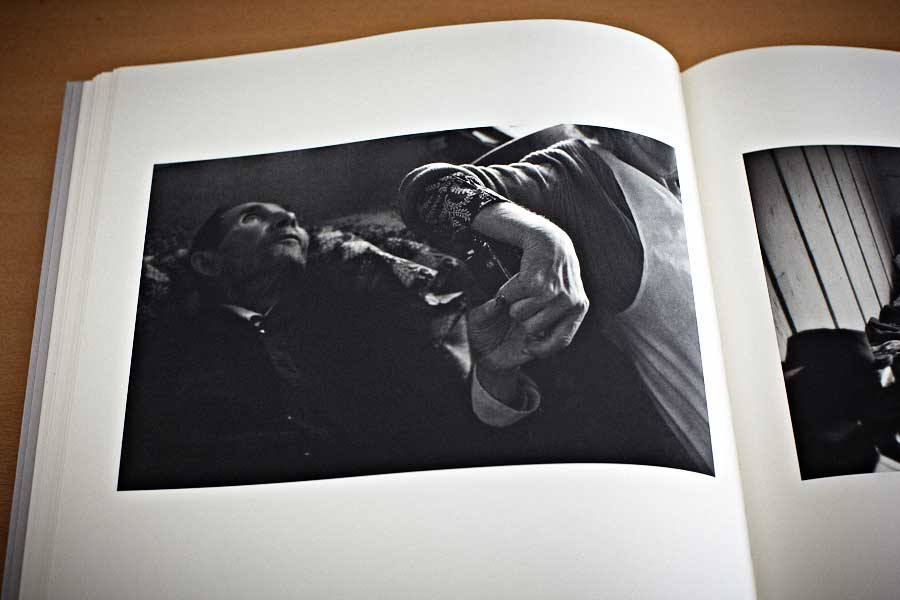 Two other series in Volume I of special mention are “Brooklyn Gang 1959” and “The Dwarf and Clyde Beatty Circus 1958“.

With Brooklyn Gang, Davidson embedded himself with a gang of teenagers and came out with a photographic documentary about rebellious postwar youth culture. The blurb introducing this series on the Magnum Photos website states, “In 1959, Bruce Davidson read about the teenage gangs of New York City. Connecting with a social worker to make initial contact with a gang in Brooklyn called The Jokers, Davidson became a daily observer and photographer of this alienated youth culture. The Fifties are often considered passive and pale by our standards of urban reality, but Davidson’s photographs prove otherwise.” 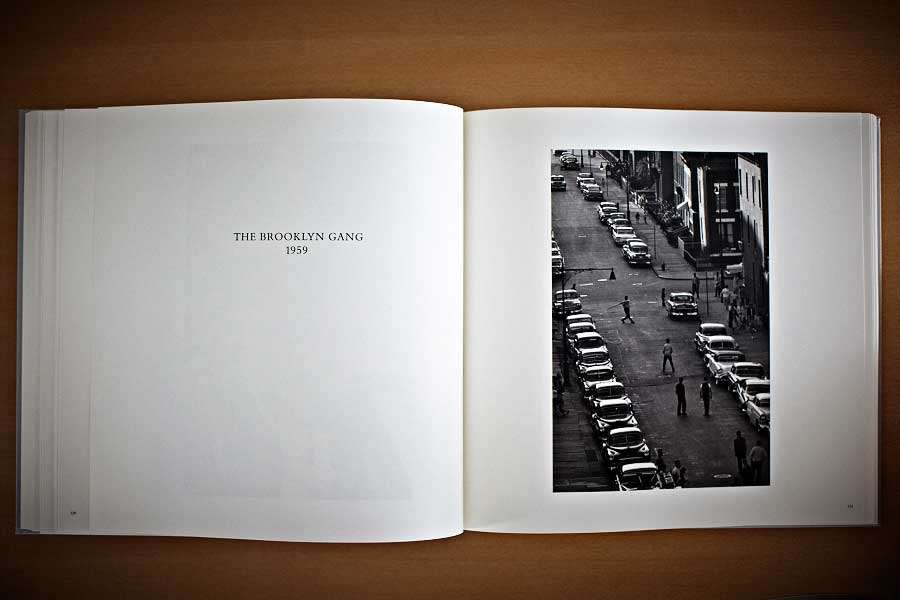 Bob Dylan used one of Davidson’s images from this series of work for the cover of his 2009 album “Together Through Life“. The following music video of Dylan’s “Beyond Here Lies Nothing” features Davidson’s Brooklyn Gang images and is worth checking out.

The best part of “The Dwarf and Clyde Beatty Circus 1958” series was Davidson’s intimate portrait of a dwarf clown by the name of Jimmy Armstrong. In his notes on this series, he says:

“I first saw the dwarf standing outside the circus tent in the mist of a cold spring afternoon. His distorted torso, normal-sized head, and stunted legs both attracted and repelled me. He was half my height and I felt a certain power over him He stood before my camera sad and silent, taking the last drag on a cigarette. Brassy music began to play and he suddenly disappeared into the lights and laughter of the world inside the tent. His name was Jimmy Armstrong but he was billed as “Little Man” on the circus flyers. We got to know one another and after the last show went to a diner together. Sometimes people would smirk at us, but Jimmy always stayed calm and self-contained. Several weeks later when I left Clyde Beatty Circus, I bought Jimmy a miniature camera, one he could hold in his hands. As we said our goodbyes, he told me I was his best friend.

While he performed the role of the clown and gave audiences a belly laugh, he endured the life of a little man living in a large-sized world. Although he was known as “Little Man,” he was a giant in my eyes.” 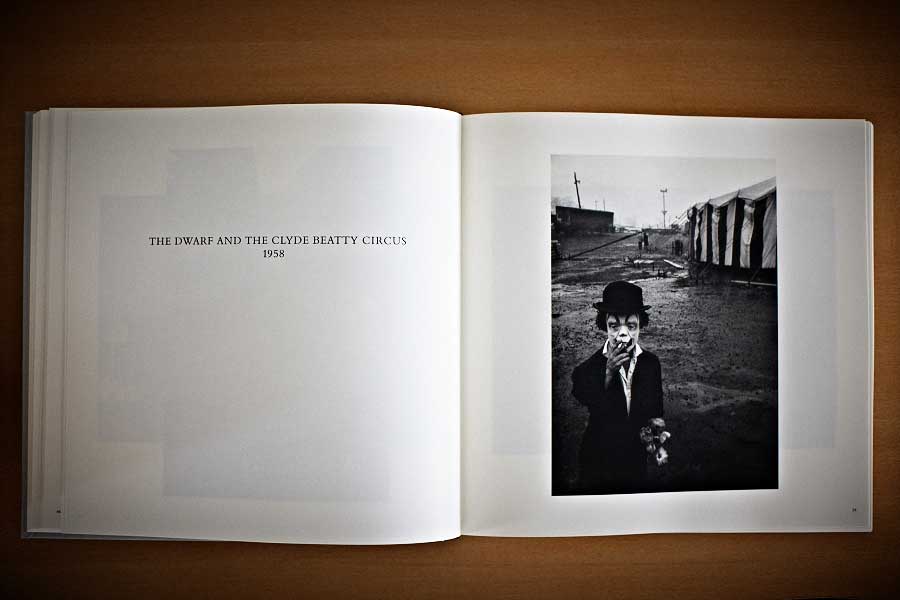 Both “Brooklyn Gang 1959” and “The Dwarf and Clyde Beatty Circus 1958” are stunning pieces of immersive documentary photography. It is well worth the time to check out the images from these two series on the Magnum Photos website (the links are Circus and Brooklyn Gang).

I am really looking forward to going through Volume 2 of Outside Inside next!