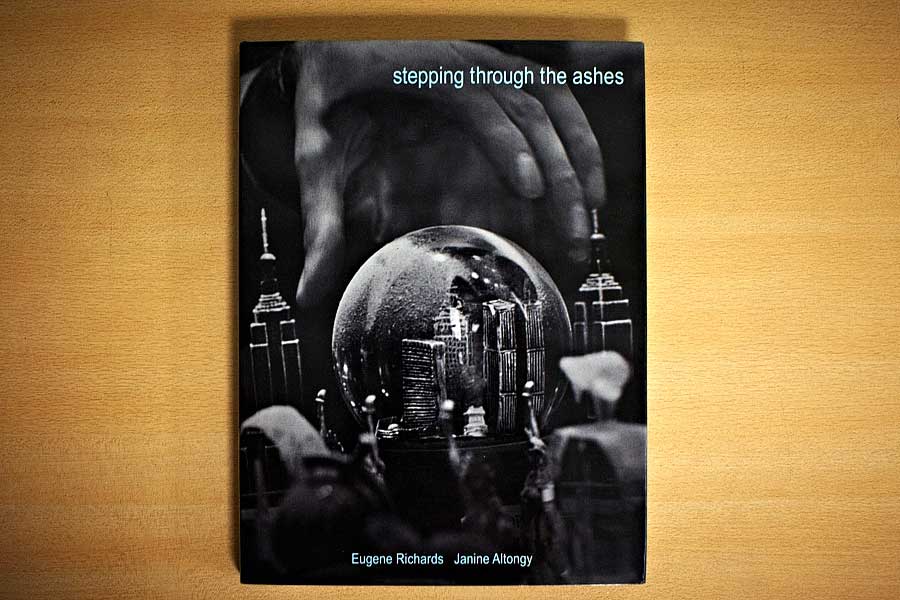 Last month was the 10th Anniversary of the 9/11 attacks. I recently got hold of a copy of Stepping Through The Ashes (photographs by Eugene Richards and interviews by his wife Janine Altongy), which was released in 2002 by Aperture.

Richards and his wife spent four months right after 9/11 walking the streets of Lower Manhattan. They interviewed families who were in mourning and attended memorial services and funerals for fallen firefighters. Stepping Through The Ashes (192 pages) features 99 B&W poignant photographs by Richards. Complementing his photographs are the interviews his wife recorded of 18 people (survivors, witnesses and victims’ relatives). I found the photographs combined with the interviews extremely powerful.

The phrase, “stepping through the ashes.” says Richards, was part of a eulogy for a fallen firefighter delivered by a bishop in a Brooklyn church. Moments after acknowledging that the search goes on in the ashy wasteland of the World Trade Center, he encouraged those in attendance to get on with life, to look hard and long at what they’ve experienced. This book then is about New York and America during a period of sudden and massive historical, economic, and psychological change. It’s about how we feel about September 11th, how we feel about our country today, how we feel about those lost in the disaster. It’s also about how we feel about the violence against innocents, non-combatants in a war. You view the ruins, you think about the Warsaw ghetto, Sarajevo, the London blitz, the firebombing of Dresden, Hiroshima. You think about the loss of beauty that comes with such violence, the sudden loss of family relationships, intelligence, promise.

The following are some interview excerpts from the book.

Officer Mitchell Coto (police officer for fourteen years, NYPD Transit District #30): A fireman approached me, . . . We talked maybe two seconds. . . And the next thing out of his mouth was “Run,” and he took off running. You could actually hear a moan, a huge moan coming out of the building. It was bending, the top of the building was . . . the metal . . . the structure was starting to bend. Then the whole thing started coming down.

Everything turned pitch-black. I made a left turn, but there was nowhere to run. There was a fire truck behind me. When I turned to look, as I’m trying to get myself under the fire truck, I saw the fireman disappear into the debris.

I pulled myself out from underneath the fire truck, because I thought that I was going to get burned alive, and I ran around the side of the truck; that’s when the debris really started coming down hard. I felt something warm on the side of my face; later I realized I had cut my ear open. By that time, it was just pitch-black. You were inhaling debris, smoke . . . between the vomiting, the debris in your eyes, everything, you couldn’t see. . . . It was actually like death. I thought that this was the end. And then I tried to give it a last shot, to try to make it out. So I took a running start with my head down. I took maybe three or four steps when I went headfirst into another fire truck that was parked there. I bounced off of it, got up, put my head down on the truck and just gave up. I said, “This is it; it’s going to consume us all.” I started thinking of my mother – that she just lost two kids, two of her sons, two out of three. Within a second I must have had like ten thousand different thoughts.

A little more of the building started coming down, and that’s when something hit me in the back. I tried to climb around the side of the truck; when I did, I made it inside the cab. That’s when the rest of the building came down. It was dead silent. The lights were on in the truck, but you couldn’t see anything because of the black smoke.

Every time I inhaled, I’d vomit right back out. I tried to open the cab door, but it wouldn’t open. I saw nothing, but you could hear the firemen’s little personal alarms. And people were screaming on the radio. Hearing the people scream and crying, the screaming, the panic. . . . Some lady jumped into a fire truck and got on the radio and was screaming, “I’m trapped. I’m suffocating, I’m dying. Please, somebody help me!” The fire dispatchers were trying to clam her down, but she never came back over the radio.

The Maydays were coming over like crazy. And personal alarms were going off. I would hear the mike key up, and they were transmitting, and I’d hear the beeper alarm going off – you wouldn’t hear any voice. And the dispatcher was trying to say, “Where are the Maydays? Where are the Maydays?” “Mayday on the top tower.” “Where are you in the top tower?” “I don’t know.” And the “I don’t know” part is what made it hard, because if you know you’re on the corner of Vesey, all right, we know we’ve got to go to Versey. But these guys didn’t know where they were.

Two or three minutes go by. I look through the rearview mirror and now I can see the blue sky. I used my feet and pushed my back up against the mid-console, and got the door open. As I’m walking, the papers are coming down. They’re still on fire.

Lt. William (Billy) Ryan (firefighter for twenty-three years, assigned to Staten Island Ladder Company 85): There were a couple of other firemen on the ferry; we just sat near each other. We were trying to put together the pieces of the day. Not much was said, really. We talked about how tired we were, how we just wanted to go home and take a shower. Then when I got on the Staten Island Rapid Transit . . . I cried the whole way home. I didn’t know how many guys were in there, but I just knew. No one was alive. There was no way. When I got home, I told my wife. I said, “Whoever they haven’t found, they’re already dead. “She’s like, “How do you know?” I’m like, “I know.”

The guys on the boat, basically what we said was, “No one’s walking out there.” Because there was just so much carnage, so many fires. When you’d go past some holes, where there was space in the I-beams where you’d try to go down, the heat . . . it would drive you back. You couldn’t even walk within ten, fifteen, twenty feet of the sh*t. It was just so hot! I’m like, “If anyone’s in there, there ain’t no way they’re breathing.” There were no computer terminals, no desks, no doors. There were no doorknobs – nothing. Two hundred stories of office building, and what’s left? Nothing, just dust. If concrete and steel can’t make it, what’s the human body going to do? Nothing. Nothing at all.

Christopher Johns (Funeral director at Harmon Home for Funerals, Staten Island): There was another firefighter. He had two children, eight and ten. A boy and a girl. I think the boy was older. People were lined up out to the street, down the corner, and all the way down Forest Avenue. That’s how many people. . . . And I’m not even talking about just firefighters. Joe Blow civilians wanted to come and pay their respects. You know, in embalming school, they always talk to you about children, about misconceptions that people have about keeping the children away from death. You’d be surprised how the kids’ minds work. So the kids were here, and everybody, including the mayor, kept saying, “Your Daddy was a hero, your Daddy was a hero, your daddy is a hero, is a hero, is a hero.” And the day of the funeral, the kid says to his mother, “Why did my Daddy have to be a hero?”

The following video features photographs from the book and a sound recording Altongy made at the funeral of a firefighter:

Suzanne Ryan (wife of firefighter Lt. William Ryan, mother of four children): Every day death bells would go off. They went on for a long time. Thirty-five funerals in this parish, Our Lady Star of the Sea, and every time I would hear the bells I’d be like, “Okay, there they go again.” And the bagpipes. The bagpipes always reminded me of St. Patrick’s Day; that was the day when all the firemen put on their uniforms and . . . now, when you hear the bagpipes, you think of a funeral. . . .Yeah, those death bells.

In the Postscript at the end of the book, Richard says, “. . . if I were to choose one photograph out of all that I’ve taken that begins to express what it means to have survived the attacks of September 11th, it would be the one I made of Bill and his infant granddaughter (found at 6:28 mins into the video above). In the picture, Bill has his head back, all the way back out of the frame, as if he’d just been pushed or punched, which in fact he had been, by the force of what he’d been saying to Janine at that moment. In a voice going hoarse and shaky, Bill was explaining how desperately he had wanted to believe there would be people found alive after the terrorist attacks. But despite all the backbreaking digging, despite the sacrifices made by the cops, the volunteers, the construction workers, and the firefighters, despite all the prayers, no one was found alive down at “the pile.” After the first day, no one. “Yet, that’s our job, isn’t it, saving people?” And as Bill was saying this, in effect putting the blame for what had happened on himself, he reached down and tentatively, wistfully caressed the head of that perfectly beautiful child.”

Much of Richards’ work deals with people who are suffering or have gone through a tremendous amount of suffering. His 2004 book, The Fat Baby still remains very high at the top of my must have photography books. Like The Fat Baby, Stepping Through The Ashes is a difficult book to go through because the content is so emotional. If you have never seen his work before, I highly recommend you go out and buy Stepping Through The Ashes or any of his other books.