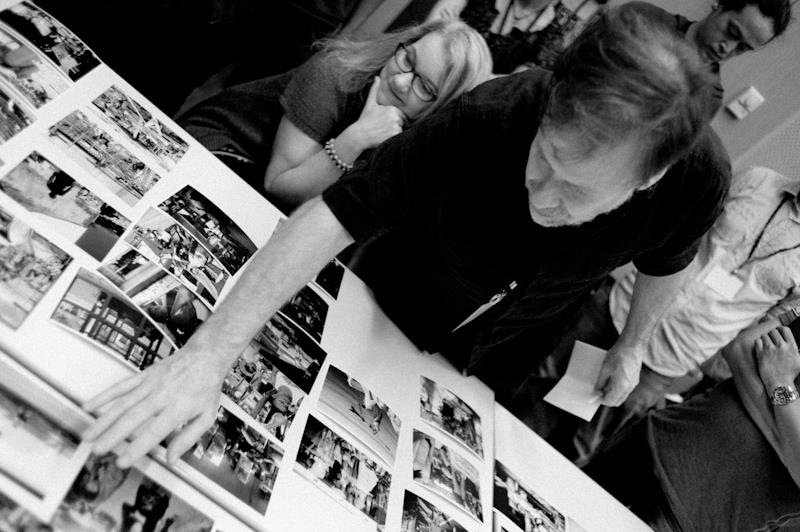 Part 4 transcription of the Q&A session during the public talk given by photographers Alex Webb and Rebecca Norris Webb, and David Chickey of Radius Books, at The National Museum Of Singapore on 9th March, 2012. 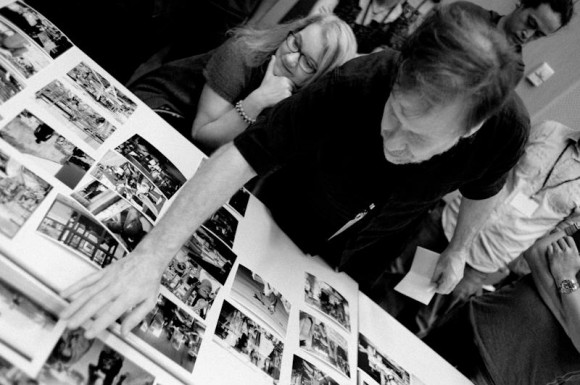 You know, my understanding of the full range, perhaps, of the emotional resonance of the image probably doesn’t comes in the act of photographing, it comes more looking at the photograph afterwards, trying to understand the photograph. So maybe in that sense, the image comes before the emotion. But the emotion is connected with it initially otherwise I wouldn’t have taken the picture so they are inevitably intertwined.

Rebecca Norris Webb: You know, I guess I see in images and I don’t necessary know why that image gets under my skin. And it’s only after looking and living, and the editing process, of looking at the images that you start to understand.

Like for instance in “My Datoka” work, I mentioned earlier, all of these images that have this wave pattern. And I haven’t lost an immediate family member and this was one first experience of grief. And they say that one’s first grief is very akin to one’s first love. It changes you and you’re never the same afterwards. And, you know, with that wave pattern, you know, I kept thinking of that and one of the text pieces that came to me that in the great plains which is a very dry area, it used to be thousands and thousands of years ago, an endless sea. And they had sea turtles that were ten times the size of a man that they find skeletons in this area.

And the other thing that I was doing a lot of reading and during this period of time and scientists, researchers, socio-scientists have decided that the idea of grieving and the five stages of grief, that is not really happening. That really, you don’t just go A to B to C to D to E, and done. That the grief keep coming in waves, they may come your entire life. And so this sense of waves and the pattern of waves and the sense of endless seas sort of came together but it’s only very late into the project, you know, that like when one of the text pieces came to me that sort of, as close to the understanding, you know, the text piece was, “Does the prayer belong to me and in the endless sea again? Does each wave of suffering teach us how to swim?” So it’s sort of mysterious the role of the images play, you know that lead to my book.

Question: Thank you very much for sharing. A lot of what you said about book is a form of looking at photography, sequence, rhythm, err you know, the relationship between text and images could as well be imported to iPad. (Audience Laugh). And I just wondered if you had any experimentation with that and any thoughts on it. I thought, literally, that the title, The Glass Between Us, might have actually referred to that. (Alex laughs) There are certain number of aspects of seeing photography this way, you know, the kind of intimacy to image and of course the dynamic range which is so much better on the screen.

Alex: I mean I really haven’t experiment with that very much, I mean with the iPad. You know, I have done some sort of small multimedia things that exists sometimes on the Web. But, you know, it takes me a lot of time, I’m kind of a dinosaur. (Audience laughs)

You know, I’m now starting to work digitally, largely because the film I have been using for thirty years doesn’t exist anymore.  (Audience laughs) But it’s a long, slow process that a Spanish newspaper some years ago that interviewed me and I said I’m a dinosaur made the headlines. (Audience laughs)

So, you know, it may well now come around that after all, I was once a black and white photographer, I thought color was terrible and that changed. And now I seem to be slowly working digitally so who knows what the future will bring.

Rebecca: Well I haven’t tried yet to do any kind of app but I am interested in it because of the text element. When I did the presentations when I read, I like the idea perhaps there could be an app where I would actually read some of the text pieces. I had the My Datoka translated now, maybe three translators who done it into three different languages.

And I like the idea because people still say that hearing my voice even if it isn’t English, their first language. And I like idea that people can still hear the tone of my voice and then I could also have my friends who are poets translate them into other languages and that somehow that could work in. I’ve been interested in that but hadn’t tried it yet. Something that interests me.

A Show of Hands and a Tale Of Two Countries : Notes from the IPA Photo Books Show 2013
Matt Black on Photography: Start at Your Front Door
Feeling How Loneliness Goes with Nguan