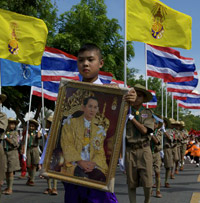 This is an ongoing personal project in which I have tried to document the daily life of southern Thailand’s population as it struggles to deal with an increasingly violent ethnic conflict stemming from years of unresolved tension with the Buddhist majority Thai state.

The term “Deep South” is the name often given to the three southernmost provinces of the Kingdom of Thailand – Pattani, Yala, and Narathiwat. They span the rugged 506 kilometers along the Thai/Malaysia border and they give the overwhelming feeling of being very much at the Kingdom’s edge.

It was once the Malay sultanate of Pattani. But in 1909 the area was annexed by Thailand (then Siam). Today the ethnic-Malay Muslim population of about 1.4 million form a majority in the three provinces, however they account for a small minority in Thailand’s overwhelmingly Buddhist population of 65 million. Over the years both ethnic groups had managed to live side by side with each other, and close knit relationships were forged in the two communities. Accusations of discrimination, forced assimilation, and a culturally biased education system had been leveled at the Thai state, but the issues lay unaddressed.

The balance was shattered in 2004 when more than 100 insurgents attacked 10 Police outposts across the three provinces. In the resulting gun battles that followed, including an all out assault on a Mosque by government forces, nearly 40 insurgents lay dead. This and other serious incidents, including the suffocation of 78 detainees in Thai military custody that same year, has led to suspicion and distrust of the Thai authorities among the Muslim population. Add all these ingredients together and the cauldron of armed conflict had finally boiled over.

Armed insurgencies have flared up before in the 100 years or so since Thailand took control, but never has the level of violence been higher or more brutal. Road side bombings, drive by shootings, and even beheadings have become and almost daily occurrence in Thailand’s troubled Deep South. With shadowy insurgents on one side, and a heavily armed military on the other, the civilian population continues to bear the brunt of the conflict. Nearly 5,000 people have lost their lives since 2004 and with no end in sight the death toll is sure to rise on both sides, Muslim and Buddhist, military and civilian.

Thai Politics (No.III), by Miti Ruangkritya
Manit Sriwanichpoom: Every Tuesday For A Year at the Gates of Thai Government
Portfolio Review Spotlight: Attavee B. Buanitisin