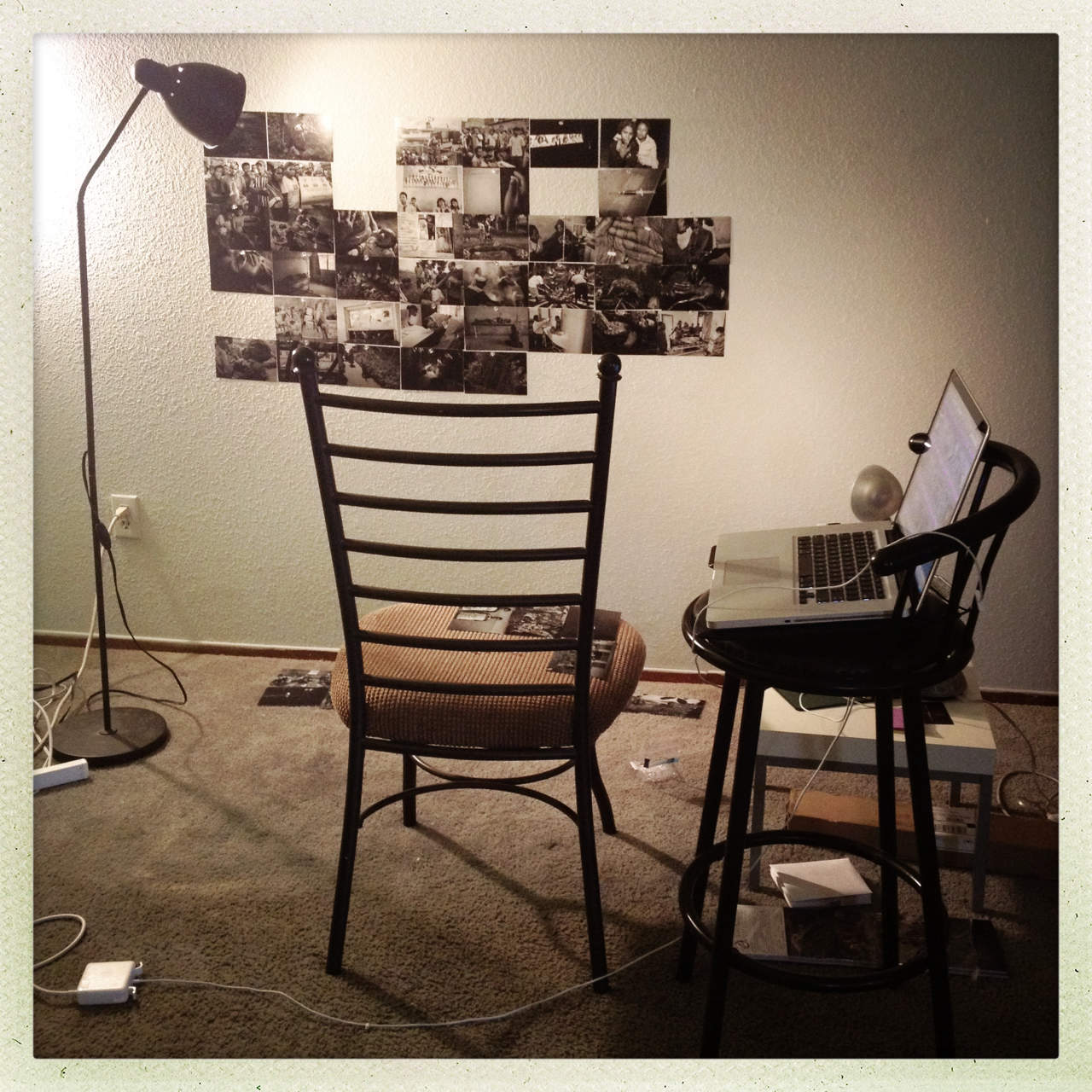 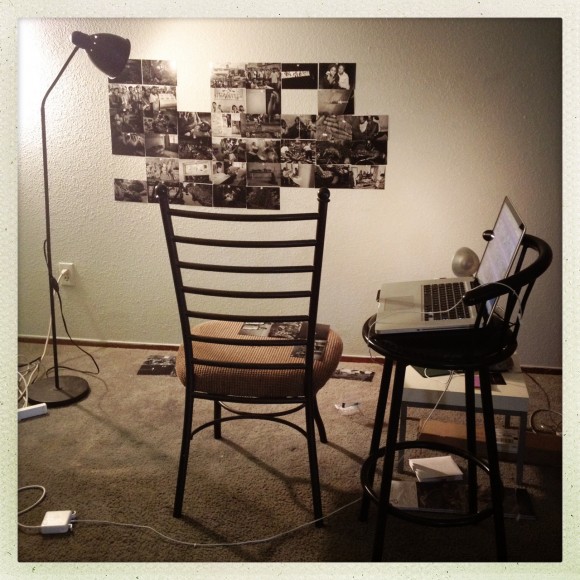 Sequencing Against All Odds in Papua. Photograph © Andri Tambunan

Invisible Ph t grapher Asia: How did your long term project come about? Shed some light on the selection process – how you searched and finally decided on this particular project.

Andri Tambunan:In 2009 I read a short article about Mama Yuli, a housewife who contracted HIV from her husband. Her health deteriorated so drastically that she weighed 30kg (66lbs).  She lost her husband to AIDS and was also discriminated by her friends and neighbors.  To make matters worst, she unknowingly passed the HIV virus to her youngest child who later passed away from a related illness.  Mother’s Hope Foundation (local NGO) came to her rescue by providing Mama Yuli with counseling and nutritious food.  They also assisted Mama Yuli to undergo Anti Retroviral Therapy (ART) and educated her neighbors and friends on HIV/AIDS reducing discrimination against her.  After regaining her health, Mama Yuli made her status public by giving a testimonial in front of her church congregation.  She then courageously shared her experiences publicly throughout Papua to raise awareness and lower stigma against people living with HIV/AIDS.

I was astounded and intrigued by her story and incredible courage.  I had so many questions.  Within a week I found myself in Papua, standing before Mama Yuli, listening to her personal account.  I learned about the dire situation in Papua firsthand from meeting many others like her.  I was an outsider but they shared their personal stories with me and allowed me to photograph them.  The reality of the situation was complicated and overwhelming. I did not set out to make a book or to work on a long-term documentary project.  But having a camera in my hand gave me both a rare privilege and a profound responsibility 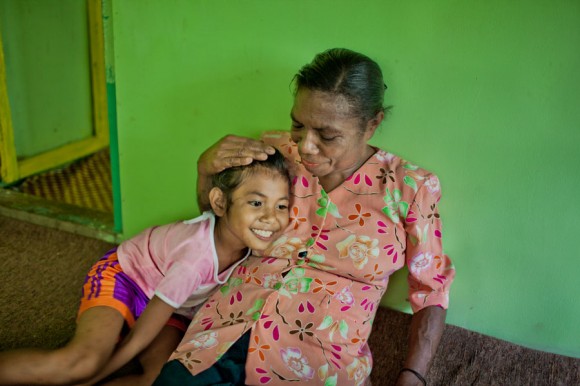 Mama Yuli (48) She hugged her 8 yr old grand-daughter Anace.  Infected with HIV in 2004, at one point Mama Yuli weighed 22kg (48lbs)  For the last 8 years she has been on Anti-Retroviral Treatment and regained her health. Photograph © Andri Tambunan

I was astounded and intrigued by her story and incredible courage. I had so many questions. Within a week I found myself in Papua, standing before Mama Yuli, listening to her personal account. I learned about the dire situation in Papua firsthand from meeting many others like her. I was an outsider but they shared their story with me and allowed me to photograph them. The reality of the situation was complicated and overwhelming. I did not set out to make a book or to work on a long-term documentary project. But having a camera in my hand gave me both a rare privilege and a profound responsibility.

“The camera is an excuse to be someplace you otherwise don’t belong. It gives me both a point of connection and a point of separation.” (Susan Meiselas). 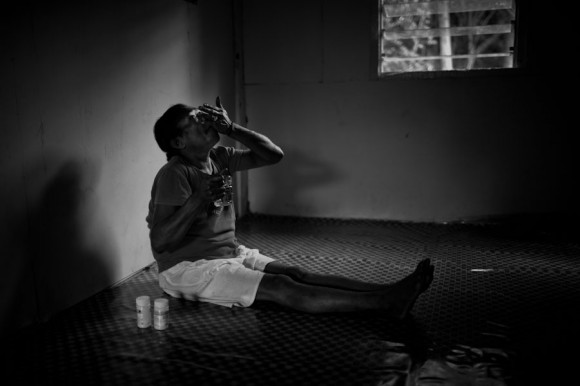 Mama Yuli takes her ARV in the morning.  To maintain her health, she consistently takes her medication everyday 8am and 8pm for the last 8 years. Photograph © Andri Tambunan

This was a self-commissioned project – how did you go about funding it at the initial stages?

My first trip to Papua in 2009 was self funded and I was only able to stay for 35 days with a $1700 budget.  My biggest mistake at the time was I underestimated my expenditures in Papua.  Since most goods have to be transported from other provinces into the region, Papua has the highest costs of living in Indonesia and the price of food, lodging, transportation, fuel, etc doubles and often triples than other parts of Indonesia.  When I decided to continue working on this project, I knew from the start that acquiring sufficient funding would be one of my biggest obstacles.

In 2011 I was a finalist for the Pictures of the Year International (POYi) Emerging Vision Incentive and received $3000 grant.  It was one of the first grant proposals that I had ever written.  I remember that it took me 6 hours to write down the first page.  Initially, I researched proposals written by past grant recipients and examined elements that made them compelling and successful.   In my case, because the issue was not widely known, I needed to demonstrate that I had the knowledge, experience, access, and motivation to undertake the project.  Once I had the 1st draft, I sent it to a couple of people I trust for editing.  After numerous drafts, it was a quite detailed proposal with almost 2000 words.  Link to my blog for tips on writing a grant proposal: http://www.andritambunan.blogspot.com/2011/09/art-of-grant-writing-and-putting-my.html

“Even the longest journey begins with a single step.”

I believe that it’s essential for any photographers to have a proficient research and writing skills.  As visual people, photographers tend to ignore them and I admit that I was guilty of that.  However, it’s so important to be able to put down our ideas on paper.  It’s a simple but important physical act where our thoughts are manifested.  I write a proposal for myself before starting any project and brainstorm “who, what, where, when, how, and most importantly, why?  I might not know all the answers right upfront and if I did they might be wrong or might change over time.  At any rate, writing out my conviction provides a solid starting point and ensure that I’ve looked at the issue/subject in various angles.  Ultimately, writing down my project serves as a personal guideline that I use to monitor my progress.  In the end it holds me accountable to the question, “Have I done everything I set out to do?

“Before convincing others we should convince ourselves” (James Nachtwey). 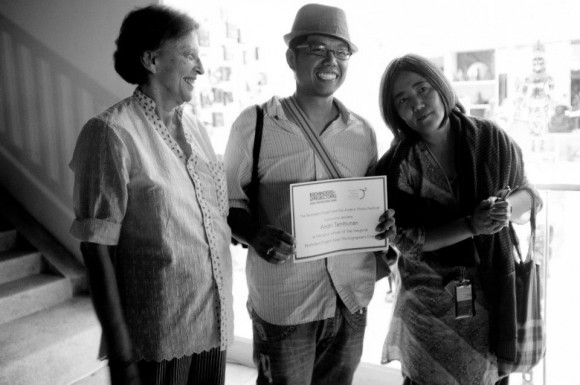 The POYi grant was substantial but it wasn’t enough.  To raise additional funding I also tried crowdfunding using Emphas.is.  However, I did not reach my target goal and the money I had raised was refunded to my backers.  Honestly, I really worked my ass off on my crowdfunding campaign and I was truly disappointed when it didn’t pan out.  Understand that I am not vilifying crowdfunding because I think that it’s one of the best methods to fund independent photojournalism projects and I had backed numerous successful projects in the past.  However, it was a roller coaster of emotion that followed.  I admit, I was disappointed at some of my friends that I was counting for support but didn’t back the project.  Also, there were some doubts that overshadowed my confidence.  I started thinking that perhaps people didn’t care too much about this issue or worst they didn’t think that I was good enough. Self-doubt is the worst.  I remember a statement by James Nachtwey when I took his workshop, “before convincing others we should convince ourselves.”  After feeling like shit for several days, I gathered my thoughts and refused to let this small bump impair my conviction and deter me from reaching my goal.

Then, a couple of unexpected things happened that turned everything around.  First, I was fortunate that a handful my backers insisted to support the project directly.  Their generosity and vote of confidence made a significant difference and lifted my spirit.  Secondly, a month later I received the Reminders Project Asian Photographers Grant in the amount of $3000.  The grant is a collaborative project by Yumi Goto and the Angkor Photo Festival and their mission is to assist Asian photographers to work on little known issues from their region.  The grant was truly a lifeline and a great honor.  In the end, including my own money, I had $12,000 total for this project.