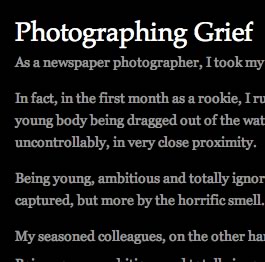 As a newspaper photographer, I took my fair share of pictures of people in grief.

In fact, in the first month as a rookie, I rushed down to Bedok Reservoir, in time to capture a young body being dragged out of the water, and the boy’s mother and sister weeping uncontrollably, in very close proximity.

Being young, ambitious and totally ignorant (yes I was), I was affected, not so much by what I captured, but more by the horrific smell.

My seasoned colleagues, on the other hand, stayed in the car while I was baptized into the world of ‘vultures’, because being veterans, they have seen enough of similar images. The nonchalance shocked and annoyed me, but I was worried and wondered, “Will I ever become this jaded and cynical?”

I thought I got a ‘fantastic’ picture – tightly framed with all the right elements. It was so powerful that SANA, the anti-drug agency, asked for the picture to be used in its campaign poster. (The teenager drowned after sniffing glue.)

I had assumed, in my very idealistic way, that I was making a difference with my photography, exactly the reason that pushed me into photojournalism in the first place.

I thought, rather pompously, that I was on my way to making meaningful pictures that could change lives, just the way my hero, the famed war photographer Don McCullin, had.

But honestly, I never thought of it as one of my glory moments. When I talked about it, and if I ever talked about it, it was more to tell people how brutal the profession can be to the soul. If anything, I was just happy that I got a great picture, and that I was capable of doing good work.

Ethics, unfortunately, only started featuring prominently in my thought process after I started journalism school two years after the incident.

I am much more careful and consider things a lot more these days.

In the past few days, so much had been said about the journalism community here for its coverage of the tragic accident in Tampines.

If there were any ‘consolations’ for me, it would be that I was thankful that I am no longer a working professional.

But I was even more happy that despite the confusions, the reasonable people do see the big differences between what the mainstream newspapers had published and what were being circulated by irresponsible laymen.

The discerning Singaporeans, I am comforted to some extent, know there are different shades of grey.

There was never a doubt that my friends in The Straits Times or The New Paper would publish the gruesome and bloody images.

But, many people also believe that TNP’s front page picture of the poor mother on her knees was just as bad. That, I would humbly disagree.

I think it is wrong to assume that all media photographers are heartless, or that they don’t think about such things.

At the scene, the first thing on their minds is always to do their job well, and that can be defined by getting the best pictures. Most perhaps think they can, to some extent, divorce themselves, from the final decision-making of whether or not to use.

Safe to say, many would prefer to be able to tell their editors that “Yes, I have the pictures, but the final decision is yours.” A few gutsy ones might be brave enough to state his opinion on whether it ought to be published or not.

On one hand, the photographer who took the cover picture was not wrong. As an employee, it is his duty to do the job well. But if he feels very strongly against taking the image, he can refuse to take them, or find compromises.

However, doing that also means one thing – he is possibly staking his career. I think if one feels personally strong enough about something, then losing his job is worth it, but that is just my opinion.

But the practice/application of ethics in an organization is not one to be done in isolation. The individuals can make certain individual decisions, but ultimately, organizations need to have common organizational standards, or at least a system in place to guide the decision-making.

If you are a young staffer in a paper, you would want to know where your bosses stand in situations like this. I don’t know if many news organizations here will put in writing its policies. I personally think it is important, for clarity, and to solicit the opinions of colleagues, and the community.

As a photographer in the field, a photographer would want to know, “Do I have the rights to refuse to make a photo?” He also wants to know, will his actions be supported, or would it be a case-by-case?

Pictures of grief are hard to look at, but like it or not, we do have varying degrees of tolerance and acceptance. When is it ok for A? and when for B? They are not always cast in stone.

Generally, we seem to think it is okay to publish of such nature if the incident is very very far away from us. During natural disasters such as the tsunami, very graphic pictures were published. Some readers were offended, but many more were moved. We probably don’t want to see it that way but such pictures have and can result in people coming forward to help.

I think the TNP picture of the mom kneeling on the floor is a very powerful image. But I am also very disturbed by it. I certainly would not want to be in her shoes. If I, or my relatives, were pictured that way, my first reaction would probably be of rage.

When I am calmer, perhaps I would remind myself that I had done the same to others, and I should not expect special treatment.

I don’t know the photographer and therefore have no way of knowing what he was thinking, and thus, I think it is unfair to guess. I also do not know if there were discussions in the TNP newsroom.

My understanding is that ST senior editors had a discussion the day after the picture was published in TNP, and agreed that even if they had the picture, they shouldn’t because it is too intrusive.

I don’t believe that picture will help the family to heal, but I believe that it is highly possible that many people who were outraged by the publication of the picture, were at the same time moved by it.

I will be the first to admit that I looked at it several times and I just couldn’t help feeling very very very sorry for her.