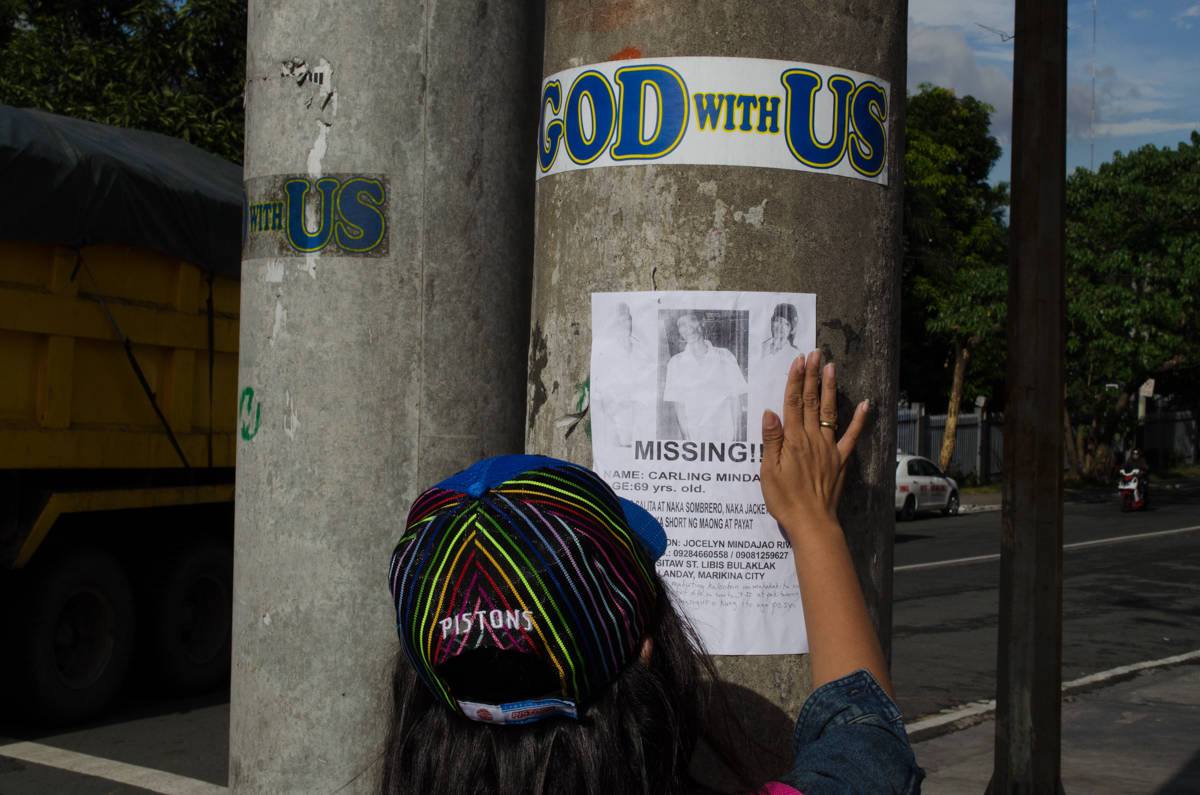 For 20 years, Jocelyn Mindajao- Riva never had the chance to spend Christmas and New Year with her parents. Last year, she made sure that her parents would leave the province for a vacation and spend the Christmas season and celebrate their grandson’s birthday in Manila. It never happened.

Jocelyn’s parents left Leyte on December 18, 2012, they would have been in Manila on December 20, 2012. Jocelyn and her family waited at the bus terminal, her parents did not appear. Worrying that her parents might have travelled in the wrong bus, Jocelyn started searching in other Manila-bound buses from provinces. Until she found a bus driver who told her that her parents were their passengers but after arriving in Manila, her parents immediately left the bus terminal. Since then, Jocelyn and her husband Jun, started searching for her parents everywhere in Manila. Day and night, from Kamuning to Monumento, Cubao to Baclaran, they walked with hope that they may find her parents somewhere. On December 24, 2012, while in Cubao, Jun saw a familiar face: Jocelyn’s mother – looking disorientated, unclean and alone. According to Jocelyn’s mother, she and her husband Carling went looking for a market after arriving in Manila, wanting to buy pork as a surprise to their grandson who would celebrate his birthday in three days. They got separated when Carling rode a jeepney without noticing her. Carling went missing since then.

Christmas and three birthdays had passed without any celebration within the family. Walking every street in Manila and going to unfamiliar places had become a routine to them. With only few photographs of her father, and a bunch of prints for their “panawagan” (plea), they walk and post missing signage anywhere they can.

“Mas mabuti pa namatayan ka para natahimk na ang pag-iisip mo kaysa naman yung ganito, hindi mo alam kung nasaan siya”  (It’s better to have someone dead, at least your mind is at peace. Unlike this, you don’t khnw where he is). This sentiment came from Josie Cauilan, a mother of three, after her son Benjie, a special child, went missing since August 2012. Benjie has special needs. He is always with his mother asking her to ready his long sleeves as he constantly wants to look neat whenever going outside their house. Aside from writing his name on paper, Benjie also likes going out and walking long distance before going home. Josie thought that the day Benjie went missing was just another normal day. On August 17, 2012, before eating lunch, Benjie went for a walk and never came back.

This is not the first time that Benjie went missing. In 2010, Benjie went missing, however, found after two weeks. For almost eight months now, Josie keeps calling every day each radio station she knows. Despite Josie and Benjie’s situation, there are still people who keep sending off misleading and deceiving messages and calls. While it hurts this way, she continues answering every text message and call she receives hoping that out of unexpected moment led some good news. She takes chances; she always does for her Benjie.

A story of a daughter looking for her father, a mother looking for her child: these are stories of longing and unconditional love of a family. In a place like Manila of more than 11 million people, what are the chances that one will find their missing loved ones? Chances are slim. Not a single data from government agencies shows how many went and are still missing in the Metro. There are various reasons why one would go missing in Manila. Families of the missing find it hard to search for their lost loved ones; they do not even know where to begin. There’s not even a support group to help. They do everything on their own, from posting “missing” signage on walls, going to police and social welfare centers asking for help, posting on social media, announcement on tv and radio stations, even trying their luck on noon time shows just to be heard. They take so many chances for their lost relatives.

After two months of searching, on February 24, 2013 Jocelyn Riva and  her family finally found her father, thin and untidy, walking alone in one of the streets in Marikina City. Carling, is now resting and recovering from the ordeal he went through.

On the other hand, after almost eight months since Benjie went missing, his mother Josie Cauilan is still looking for her son. Hope is the only thing she is holding on to.