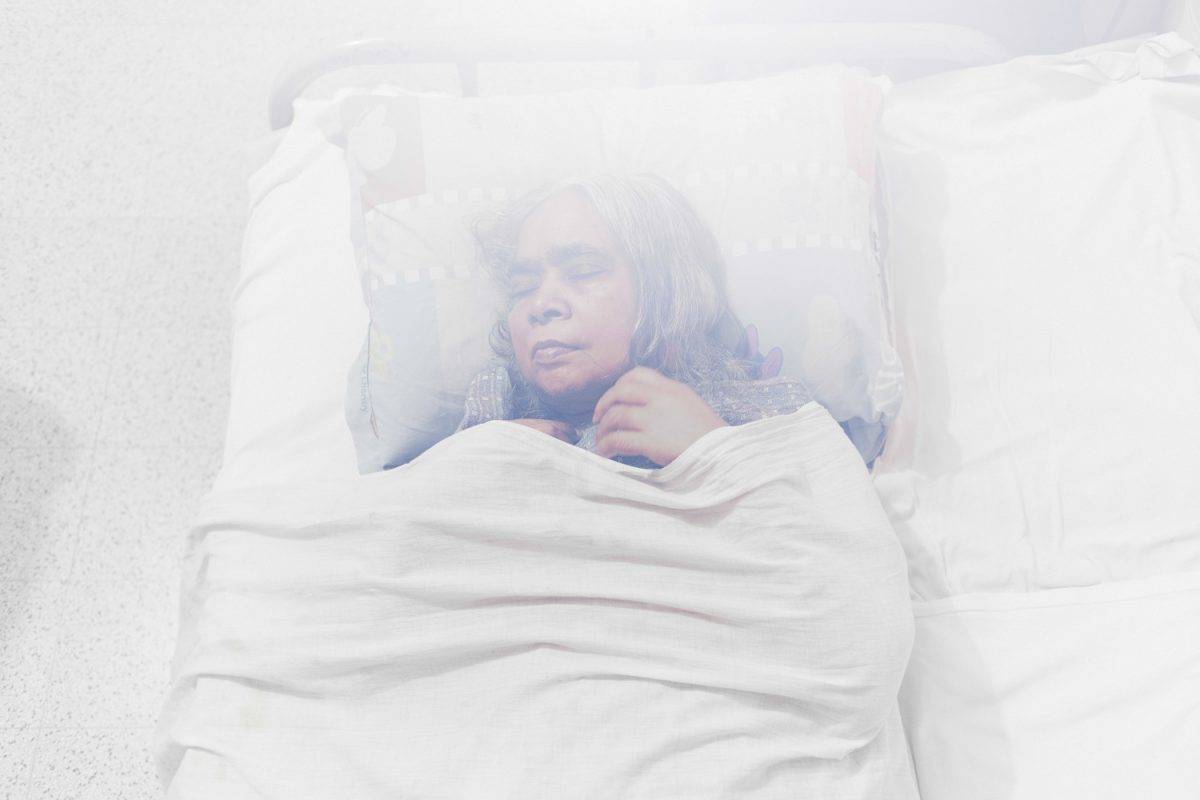 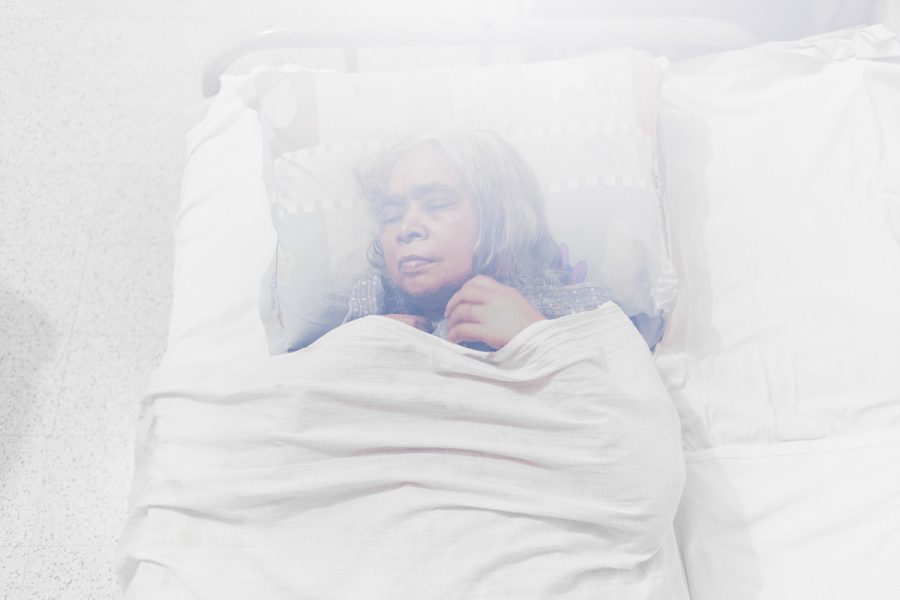 Her hair turns grey, then white. More and more white. Grandma looks beautiful each day and peaceful when she sleeps. It seems time has freezed, as the frozen fishes in the refrigerator. Grandpa sits beside her, watches her pass away. He sings from the Psalms as light slowly fill up the room. What Remains © Sarker Protick.

Sarker Protick on Approach and Engagement

The following are highlights from Bangladeshi photographer Sarker Protick’s talk ‘Approach and Engagement’ presented by The Straits Times and  World Press Photo on 30th January 2016 at the National Museum of Singapore. Transcription by Sebastian Song.

I wanted to talk about, more openly, how it started for me. The work on my grand parents which is at the exhibition actually started back when I was finishing my studies in photography. I’m going to show some work which I have not shown and it was how I started without anything in mind. With a blank head you can say. And how it transform over time and how it reshape the whole work. These were the earlier photographs of the works now known as What Remains. So that I can actually spend more time with them, hang around and talk and get along with them. It was less photographic and more spending time. These photographs were not long exposure and not as white. It was basic snapshots. I was going around making photographs in normal exposure and light.

I had a small camera and can move more easily. I didn’t have to think about colors. There was no specific palette. I have a lot of photo like this. This is a photo that happens every day, after my grandma took her show and she always sit on the bed on a while before she lie down to sleep. It was just there everyday and I was always seeing from the back. Then one day I realize her hair was so beautiful. Of course it was not like this all the time. I was more interested in the hair and I got closer. I made lots of photographs like this. Same place everyday. Then one afternoon I was sitting on the couch and saw the door slightly open and I saw this light through the door. It was white washed. I felt something from that scene. It was something important for me. To reshape the whole work and later made the work that you know now, with the long exposure. But this was the origin. That time I used the tripod for the first time and this palette of color was something I’ve never seen before.

From that point on, I understood where I want to go.

I had a close relationship with my grandparents. I was the first grandchild and had all the love from them. Because I started with the orginal approach, I was limited with the tripod and to make sure there is enough light in the room and the slow shutter. I think limitations are important in work. If you limit yourself, you might find something more interesting than if you try everything.

The still life became part of the story because they are always living inside this house. All these things around them also became small characters in the story.

Finding Stories / Serendipity or ‘Cosmic Shit’ – Pete Muller. My friend, Pete, says it’s cosmic shit and I totally agree with him. You have no clue how it happens. You just have to be there. Your eyes have to be open. Your mind has to stay open. 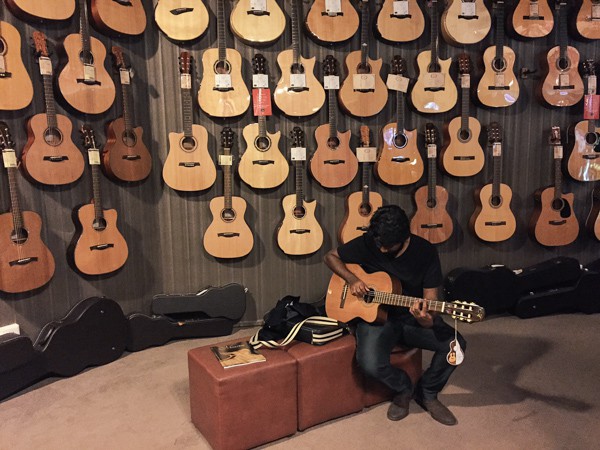 Questions and Answers with Sarker Protick

How do you go about photographing your grandparents? Do you talk to them or do you maintain silence?

I’m always talking, always talking to them if they’re not sleeping or eating. I was joking and having fun. The process wasn’t difficult. It takes time to realize later when somebody dies or leaves, then at that point you realize it’s being a long journey.

How or when do you know the end of a project?

Except the work I showed last called Letters, all the other works I don’t know when it will end so I can’t answer that question. But for Letters, it was a decision made that I would photograph within a period. It’s not that I haven’t photographed but this music will only have these images. But then again, it was not a photographic work, rather a music work that incorporated some photographs. None of my photographic works are finished. I still share the same question that you just asked.

I feel a lot of melancholy in your work whereas I see in front of me, a bright and happy person with a sense of humor, how do you explain the melanchony in your work. Or more generally, why do you think we are more inclined to document pain and sadness more than the happy side of things?

I think we ask a lot of our students. It is important to understand why do we do it. I think tradition has established that for photographers. It keeps going on but if you look at literature, the novels, the writers also depict struggle. But writers have more depth in their stories. They don’t just write about struggles, they have other elements happiness, family, joy, relationships etc. You’ll find these things in literature and novels. Sadly photographers miss those things for some reason. Maybe from a lack of understanding, proper photographic education. We are more focused on making a nice picture than understanding the depth of the story. That’s why a lot of photographers miss that and they just go for the struggles and the agony. That’s something we should get over with

Couldn’t we document joy and happiness for a change? There’s more pain than joy in the exhibition (World Press Photo 2015) downstairs.

I think there are a lot of people who does it. One of the reason why I did the work on the film industry because I saw the people are working hard but not necessarily talk about the poor part of Bangladesh. It represents the emotion, the spirit and the color which is more Bangladesh for me. They are all struggling people but they are not suffering but enjoying and living life.

I’m curious about your journey to discover and refine your visual language. What is photography to you?

Photography is like poetry and literature. Back when photography was not invented, people used to be poets and writers. Now you see a lot of film makers. I was reading this film critic who wrote that we’ll see a lot of more important films in the future which will serve as novels used to do. Technology has given us lots of options and mediums. Photography has a lot of directions. It can be about stories, personal stories, journalism, and art. It can be like poetry. I’m open to all of that.

But personally for me if I am not involved with the story. If I don’t feel alive when and where I’m doing it whether it is by the river or the film industry, I have to belong there. If I don’t love being there, I don’t think I can work.

What is the role photography, if any, in influencing Bangladesh’s national identity? We have this naïve understanding of South Asia, i.e., India, Pakistan and Bangladesh is of one “sameness” which should not be the case.

For most of my foreigner friends who come to Bangladesh if their friends ask where they are going and they answer Bangladesh, the reply is often, “Is it India?”

The truth is it used to be India. The whole continent was India then it became Pakistan and India and now Pakistan, Bangladesh and India. But I find if you really want to know the identity of what people think, you type the name of the country in Google and click on the image. That is the what the raw identity lies. If you search Africa on Google, 80% of the photographs are children starving to death, they don’t have anything, they don’t have culture etc. And Google can show that fairly well. We always talk about it at the school. Of course photography can play a very big role about it. But it’s a difficult job because it has been established for so long, especially by the Western media. To change the whole thing, it takes time.

I’ve noticed that the language of Pathshala has evolved these few years from Shahidul’s social documentary vein. Now it’s more diverse and more representative of people like you. How conscious was that a decision for the school and how did the new tutors feel?

For myself, I studied something else. I studied and graduated from business. I was always interested in music and was unaware of anything regarding photography before 2008. I come from a place where I have no clue of what has been happening not just around the world and traditionally in Bangladesh. I was never aware or interested in it. The first work that really hit me was William Eggleston. That work was more musical to me and from a musician point of view, it has a rhythm, it has harmony and it has different elements to it. So I was always influenced by that.

Second of all, as a institution, there was already this discussion happening. Pathshala has built that image of Bangladesh, that stereotypical image, and we were aware about it. Pathshala has actually done a lot. Shahidul and his successors were successful in the photojournalistic genre. Their stories have great coverage in Western magazines and newspapers. But there was a lot of young photographers who without understanding were just following that tradition. So the same story kept coming and coming. At one point, the institution felt there was a necessity to break off from that. The last four or five years, it’s still evolving. But we are not doing for the sake of style but more from a necessary point of view.

More from Sarker Protick at http://sarkerprotick.com

Sarker Protick is a documentary photographer and lecturer at Pathshala South Asian Institute of Photography. He is also a member of VII Photo Agency.