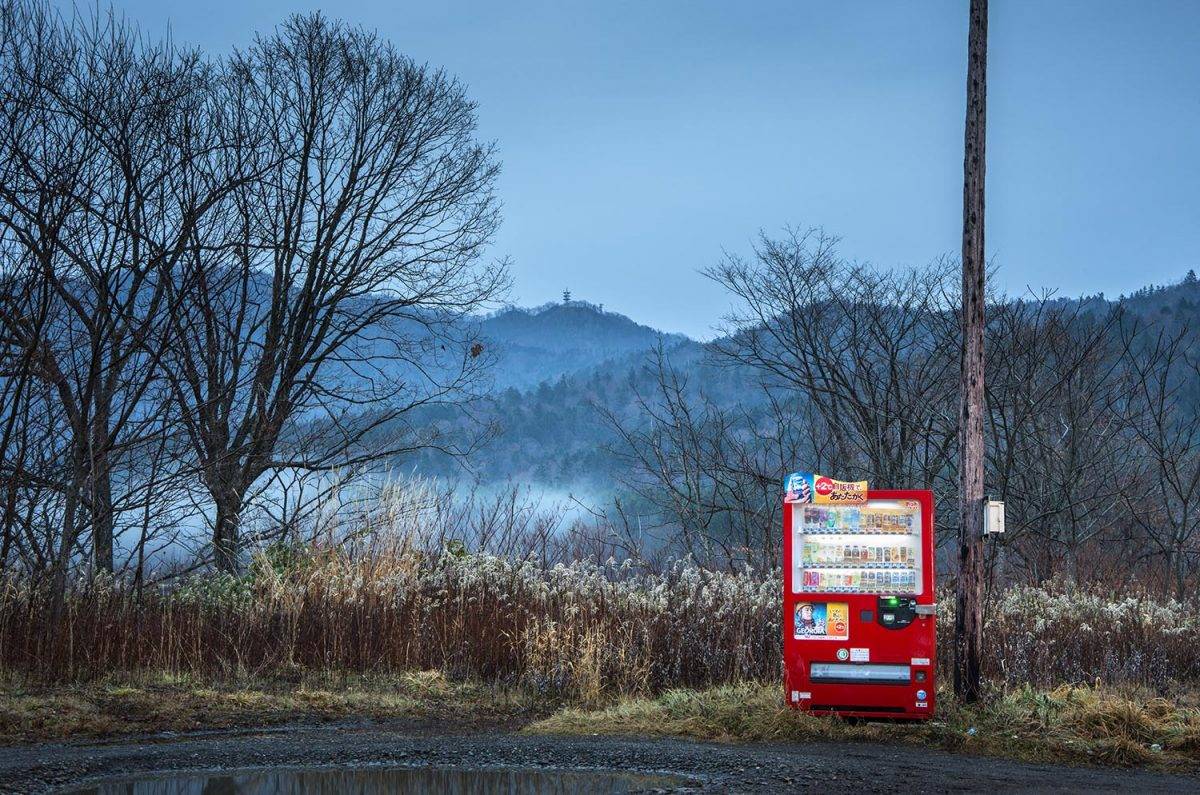 There is something rather charming about a quiet elderly gentleman wading through terrain, season and weather to photograph vending machines across Japan.

Hokkaido-born and based photographer Eiji Ohashi (b. 1955, Japan) has been photographing Roadside Lights, a typology of vending machines across various cities and landscapes in Japan for years. We met Eiji as a guest portfolio reviewer at the recent Mt. Rokko International Photo Festival. Those in Singapore will be happy to know that Eiji will be coming down and exhibiting a selection at Bugis MRT Station (Downtown Line) opening 6th October 2016 at Singapore International Photography Festival.

They can be found in metropolitan areas, of course, but also in the furthest corners of the mountainous areas and the end of a promontory. I had wondered in such cases, “Who uses this machine?” The vending machines do not appear in any special or extraordinary place. Rather, they appear in ordinary places: a non-descriptive end-of-the road or in front of someone’s house, for instance. Today, it won’t be an overstatement to say that the vending machine has become the most familiar sight that symbolises Japan, but I suspect only a few people are aware of the fact that the sheer spread of vending machine is unique to this country.

Yet, when the Great Tohoku Earthquake hit in 2011, and the events surrounding the nuclear reactors led to a nation-wide power-saving campaign, one of the first items listed as wasteful products was the vending machine. Sure, humans can live without vending machines. There is even a sense of skepticism in becoming too comfortable with the convenience it affords. But in Iwate and Miyagi prefectures ― areas that suffered severely both from the earthquake and its aftermaths ―vending machines were the first to be set up after the cleaning and removal of buildings and debris. I hear that these were set up to supply water to the workers and affected citizens engaged in recovery efforts.

“Yet, when the Great Tohoku Earthquake hit in 2011, and the events surrounding the nuclear reactors led to a nation-wide power-saving campaign, one of the first items listed as wasteful products was the vending machine.”

In Japan, vending machines now occupy an important part of the infrastructure. They also prove the safety of our society in that these machines can be placed anywhere. I hear there are twice as many vending machines in the U.S, but all of them are located indoors.

In Hokkaido where I live, winters are harsh and snows are deep, and every day can become rather inconvenient, but even then I can get warm drinks from the vending machines. When I hold a warm bottle that I buy from the vending machine, my feelings relax. It might be a peculiar mentality of the Japanese, but for me, a vending machine has over the years become an object that reminds me of the story “Hat Jizō”, a story that has been passed down from generation to generation.

When I lived in Wakkanai-city, the northern-most city in Japan, I remember being caught in a snowstorm and I had to use lights coming from a vending machine to ascertain my own location. Since then, I slowly began to pay attention to vending machines, and soon after I was directing my gaze at them and thoughts to them and the lights they emit with attention and affection.

On one snowy night, I was attracted to the form of snow lit up by the vending machine, and since then, on every night that brings fresh snow, I go out before the snow-plows come to photograph the beautiful sights. I probably looked like a strange suspicious man to others. Naturally, it is difficult to photograph under such weather conditions, but I could not be happier than taking photographs of the mysterious encounter of form and light orchestrated by vending machine and snow.