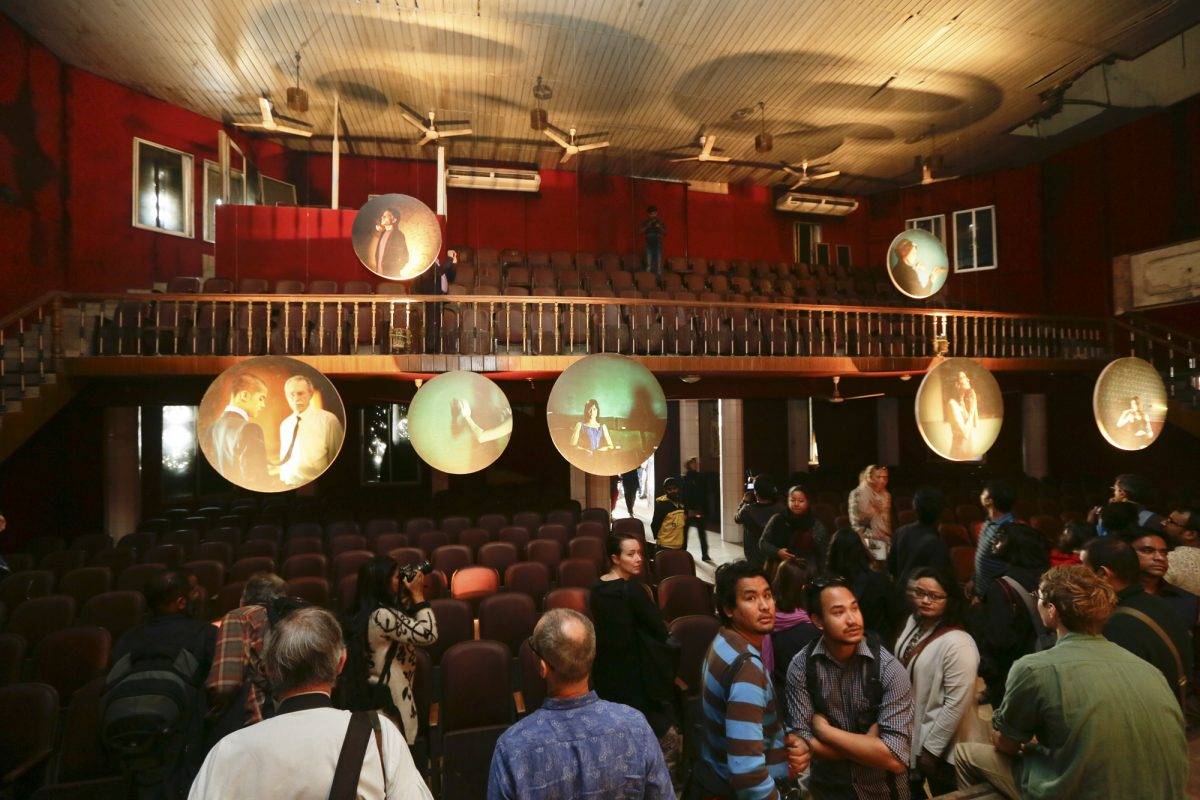 Bangladesh’s capital Dhaka is one of the most densely populated cities in the world and a place where we can see humanity at its rawest. It is also, for more than 15 years, home to the first and largest International Photographic Festival in South Asia, Chobi Mela.

Since 2000, the festival is organised biannually by Drik Picture Library and Pathshala South Asian Media Institute. The upcoming edition, Chobi Mela IX, will take place from 3rd to 16th of February 2017.

The curators, ASM Rezaur Rahman, Mahbubur Rahman, Munem Wasif, Salauddin Ahmed and Tanzim Wahab, who all have expertise in different fields of photography and art, bring a unique perspective to the curatorial process.

Mahabub Rahman, founding member of Britto Arts Trust, visual artist and guest curator of Chobi Mela VIII, emphasises the psychological and physical impact an exhibition should have on the viewer, “A viewer can only be immersed in a work, if an image can target senses other than vision. For example, if I have goose bumps as an onlooker, then it has surpassed my visions and appealed to my tactile sense – hence, the piece becomes more than an experience for me. The way the cognitive takes a visual command and knocks other senses, like recalling a smell or taste, is something that I seek to manage in exhibitions I curate.”

The theme of this year’s festival is Transitions. The curators have selected works of 27 artists from 16 different countries who relate to flux in very different ways, from personal to global.

We are living in an age of important transitions; geo-political, socio-economic and climatological shifts are reshaping the face of the planet. Photography is transiting into an age of infinity – limitless pixels, limitless images, limitless clicks – the medium is developing at exponential speed. Likewise, the language of photography has evolved. Contemporary photographic works blend with narratives and techniques of other art forms, opening up new possibilities of storytelling. The curators aim to connect the selected works around this vast theme of Transitions, like verses connect to form a poem, giving the spectator the possibility of personal reflection, interpretation and opinion. 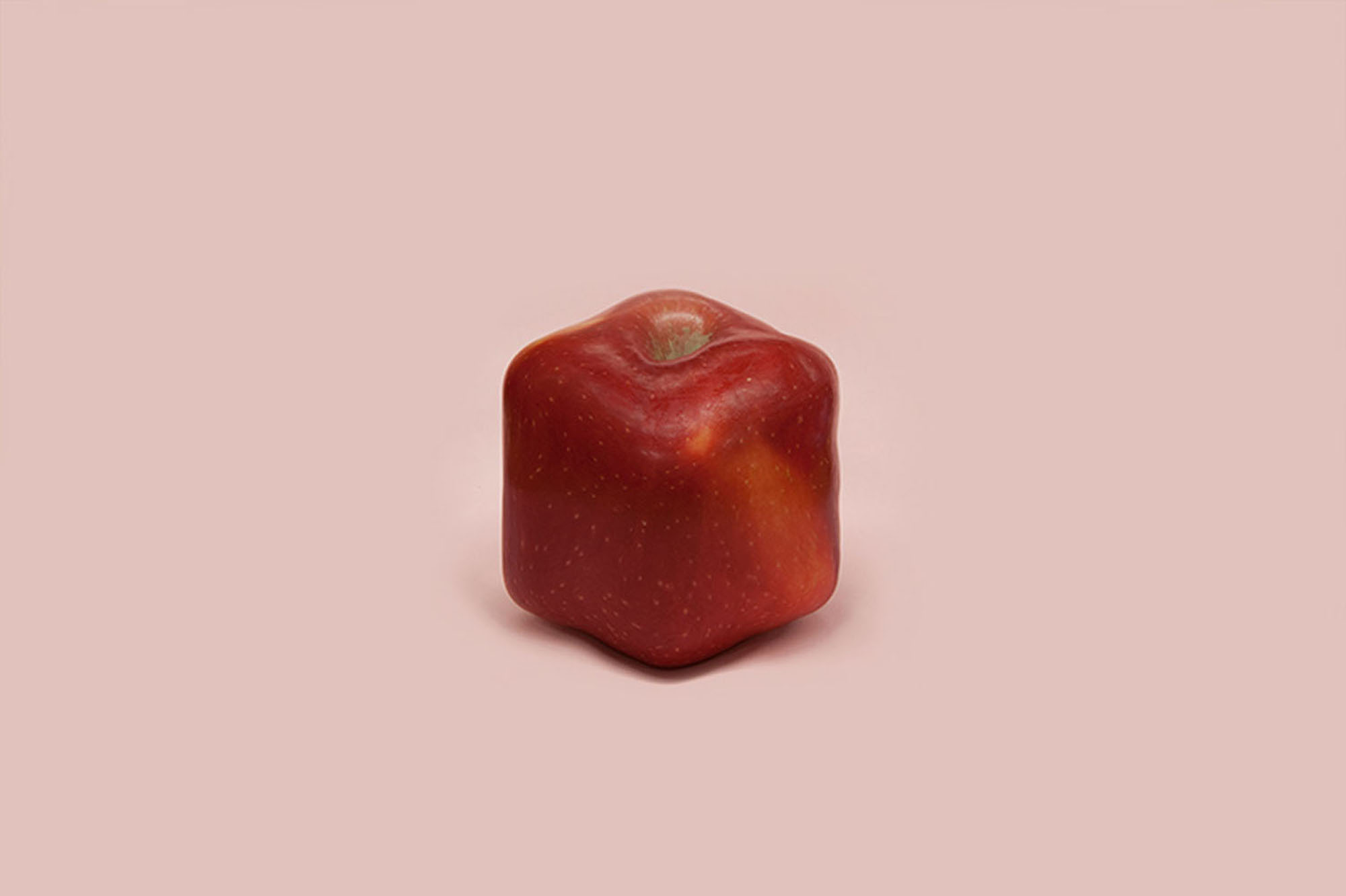 A Guide to the Flora and Fauna of the World, Robert Zhao Renhui (Singapore)

Robert Zhao´s work “The Institute of Critical Zoologists” is akin to a scientific catalogue. Zhao’s images show everyday objects, animals and food that have been scientifically altered by man. They seem almost normal at first sight but upon closer look, the spectator realises the strangeness in them. The subject Robert treats is dramatic and frightening yet his subtle and quiet approach makes his work poignant.

Debashish Chakrabarty is a Bangladeshi photographer, amateur astronaut and time traveller. In his series “Stardust”, Debashish retraces the journey of man on planet earth, still in search of a meaning for existence after thousands of years of perpetual evolution and inventions. He sets the story of humankind in a very new light, simultaneously including an unwritten chapter of history, the future. Although we still bow in uncertainty and awe before the endless outskirts of our planet, we may now, according to the artist, be ready for transiting into space and including star system highways into daily travel routes.

In “Native Women of South India: Mannerisms and Customs” Pushpamala N, in collaboration with Claire Arni, reincarnates contemporary and historical popular images of Indian women. The feminine imagery ranges from goddesses, movie stills, calendar icons to ethnographical and anthropomorphic studies. The visual lexicon the artists created is on the rim of fiction and socio-historical document, giving the spectator a broad and intimate view of the multifaceted roles and stereotypes that exist around the figure of Indian Women.

Nasir Ali Mamun introduced a new language for portrait photography in Bangladesh in 1972. Since early childhood, his inquisitive mind has been ceaselessly in search of exceptional people. He wanted to capture their achievements and successes, to paint their pain and pathos with his camera. “When I was seven or eight, I used to wonder how people write books, who are the people who discover or invent, how do they create melodies, how is an image born, how do they win or lose? Looking for an answer, I took up the camera in my hands (…)”. Number of publications on famous personalities are at Nasir’s credit, including poet Jasimuddin and German Nobel Laureate Günter Grass. Chobi Mela IX is dedicating a retrospective to the artist’s life and work. 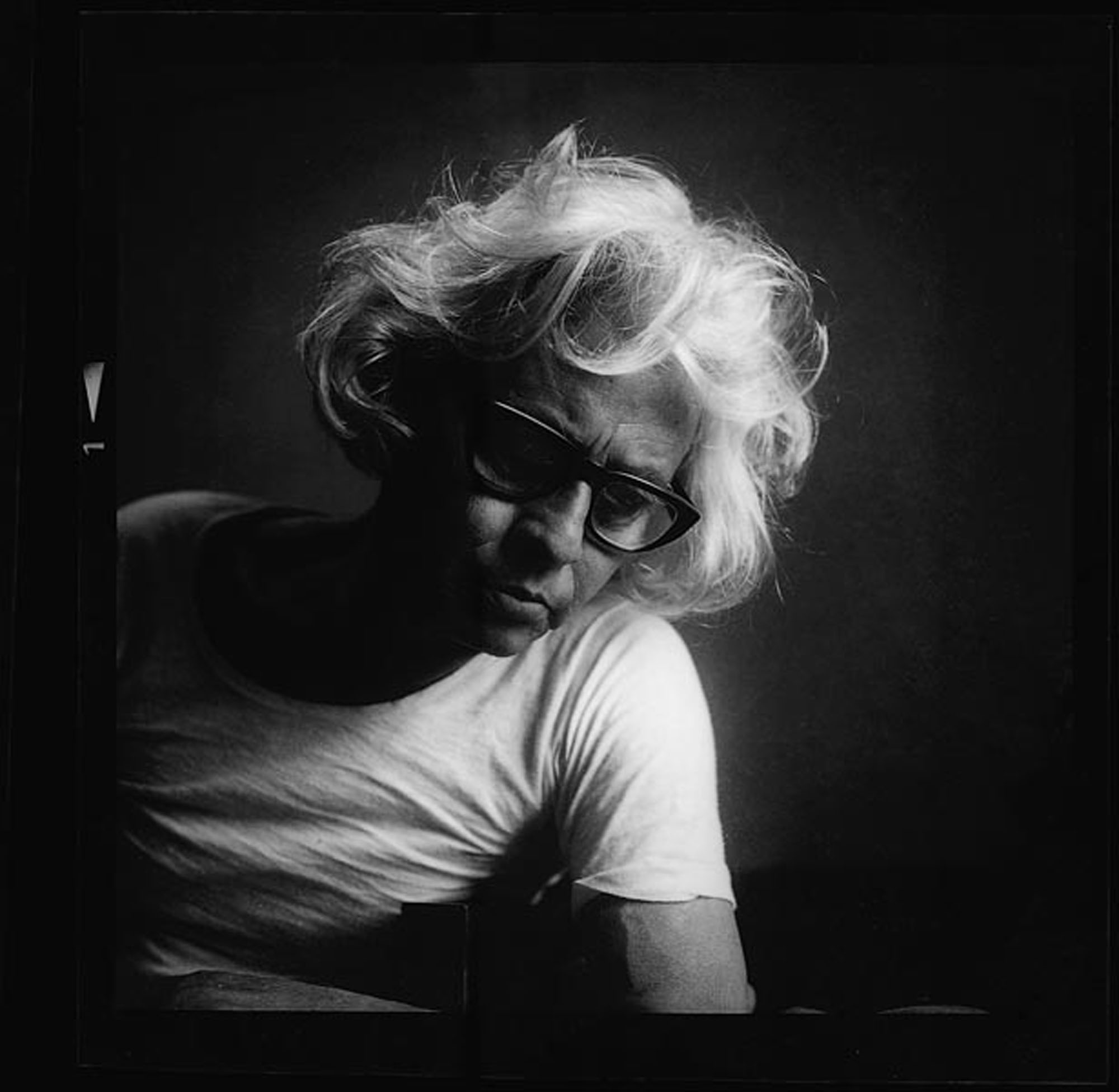 Me and My Generation, Nasir Ali Mamun (Bangladesh)

Another highlight is the exhibitionis the  Postcolonial Photo studio, curated by Alexander Supartono, historian and art critic from Indonesia. Exploring the visual residues of colonial photo studio imagery and concept in the postcolonial world of images, contemporary Asian and South-Asian artists have reconfigured the commonplaces and aesthetics of colonial times in today´s socio-economic context of their respective countries. The past, present and future imagery of social portrait photography are merging in this very unique show. The result is an expanded postcolonial archive of historical, reinvented and reimagined visual elements.

Following the stretch of boundaries of photography towards new medias, Chobi Mela IX is including moving image in this years´ exhibitions. “United Red Army” by Bangladeshi artist Naeem Mohaiemen reconstructs the airplane hijacking in Bangladesh carried out by the Japanese Red Army in 1977. The artist uses mainly audio footage of the hostage situation, leaving the spectator in a constant position of expecting a visual, lack of which, the imagination sets in. In Spanish artist Lois Patiño´s film on the transit of smuggled goods between Portugal and Galicia fiction, documentary and experimental come together. Timeless space, in which the abstractness of the very concept of borders becomes tangible. The transition from one side to another is almost motionless and invisible.

Several renowned artists are holding workshops during Chobi Mela IX. With names such as Donald Weber, Anders Peterson, Boris Eldagsen and Rishi Singhal, the choices are equally delicious. The festival has also invited Markus Schaden and Frederic Lezmi from Germany to conduct a two-part, in-depth workshop on photobook making. Curator Munem Wasif highlights the importance for this workshop to take place in Dhaka, “In a country like Bangladesh, where publishing houses barely exist, to develop a culture of self-publishing photobooks seems very important to me”. 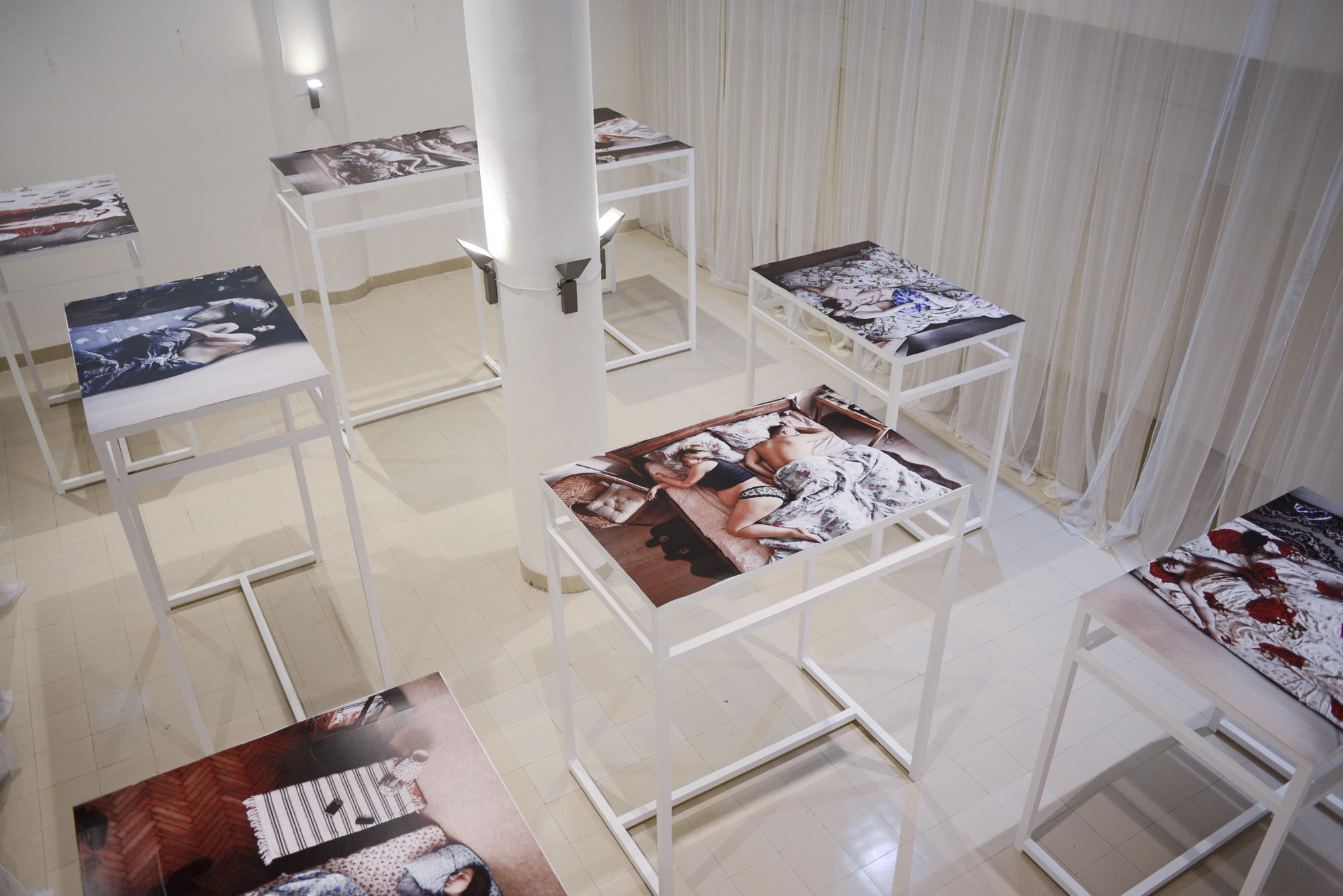 An installation of the artwork by Russian Artist Jana Romanova of her project ‘Waiting’ at Bangladesh Shilpakala Academy, Dhaka.

Chobi Mela was brought to life by Shahidul Alam, Director of Chobi Mela and the Pathshala South Asian Media Institute, in a time when young Bangladeshi photographers were producing important bodies of work, yet the major festivals and audiences were centred in the west. The festival allowed groundbreaking works to be seen by the rest of the world, as well as bringing contemporary international artists to Dhaka on a regular basis.

The festival is entirely free. It is run and set up by Bangladeshi photographers and professionals of the Arts. This year the exhibition venues are exclusively in the southern part of the city, the Bangladesh Shilpakala Academy and Northbrook Hall, Beauty Boarding, Bulbul Lalitakala Academy of Fine Arts (BAFA) in Old Dhaka. Pathshala South Asian Media Institute is hosting all educational events which includes workshops and portfolio reviews. There are screenings and gallery walks happening throughout the festival.

The Chobi Mela IX team and curators are working with full Shakti, hoping to see many visitors from all over the world at this years´ very promising festival.