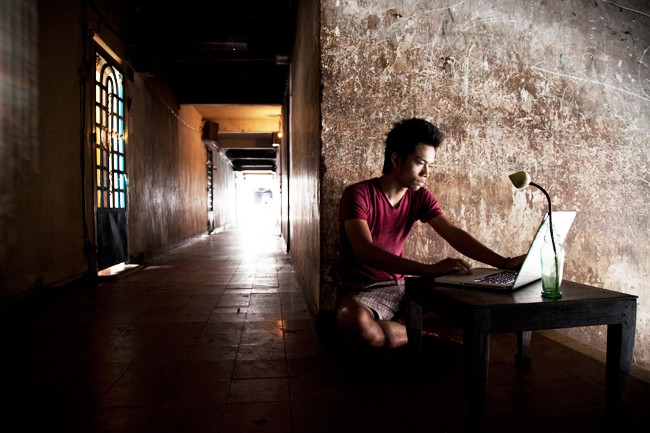 In this APWS Spotlight bi-weekly series, Jessica Lim presents work from previous participants of the Angkor Photo Workshops and finds out what they have been up to.

Destroying old heritage buildings is like killing a group of old people.

ON is a combination of 2 words, OLD + NEW. OLD refers to old buildings, from the French colonial era up to modern Khmer architecture from the 1950s to 1970s during the Vann Molyvann period. NEW is about new generation. ON works with urban people born after 1979 who are engaged in activities in different old buildings.

Every year, new buildings such as apartments, commercial centers, hotels, shopping malls and skyscrapers are being constructed downtown, signaling at the same time the threat being faced by old buildings.

In 2008, I started to take photos of all these old buildings from the outside without focusing on people. Then, I felt something was lacking, as there were people living, studying and working in them. In 2009, I started studying about urban heritage cases, and thought about who I should involve in the series. Finally, I decided to work with urban youths. Since 2010, I have already photographed 30 buildings, and it is currently an ongoing project in Phnom Penh and other provinces in Cambodia.

Kim Hak was born in Battambang, and now lives and works in Cambodia. He obtained a diploma in Tourism at the National Institute of Management, and developed a passion for photography, participating in various workshops at the University of Kuala Lumpur, the Angkor Photo Workshops, and Studio Images co‐organised by agency Melon Rouge and the French Cultural Center. Most recently, he was awarded“Artistic Creation Project 2011, from the Musée du Quai Branly, Paris, and his portfolio has been published internationally in Images Magazine (France), Libération (France), Ojo de Pez (Spain), and Internazionale (Italy). Kim Hak is also a self-trained painter.

What made you start becoming interested in photographing old buildings?

There are three things that interest me most in my life: Art, Archeology and Architecture. I often try to learn and understand from them.

I come from Battambang, the countryside of Cambodia. I moved to live in the capital city Phnom Penh to study and work. In Phnom Penh, I can see that the capital is mixed with many different types of buildings, from French colonial to modern Khmer architecture, Chinese flats and also skyscrapers. The reason I am interested in old buildings is because I have been seeing how they are threatened by destruction while new buildings are being constructed downtown.

In my work “ON”, I am not against development as we need it, but I want to see that old buildings are cared for and paid more attention while country is developing.

Tell us more about how you decided to work with “urban people born after 1979”.

The Khmer Rouge regime ended on January 7th, 1979. And I was born in 1981, just two years after the darkest time of the Cambodia’s history. I want to do this work from my generation, that’s why I have been working together with urban youth born after 1979. I want combine the past (old buildings), present (the youth now), and to put it together for the future.

What else are you planning to do for this project in the future?

I will continue shooting more urban heritage buildings in Phnom Penh, then, I will also extend my project to provinces in Cambodia. The main goal of this work is to publish a book in the future when I have enough material, and the book will be made available in libraries for students.

What is important to you in your photography?

The meaning of the message behind the image. For me, I consider photography as one language. And it is special, because of its globalized understanding. Photography is like other art forms such as films, movies, paintings, performances, and so on. I do it to express what I want to say and send messages to people.

What are some things you learnt during the Angkor Photo Workshops in 2009 that has shaped or influenced the way you worked?

It was a great chance for young Asian photographers to meet each other and learn from different well known western photographers. I had an opportunity to learn from Antoine d’ Agata. He didn’t try to influence us, but guided and instructed us to walk on our ways. There, I learnt how to build the stories. It really helps even now, and in the future.

Do you think the way you photograph has changed since you first began photography?

Yes. It has changed from creating single photos to photos in series, and built stories. I care more when I take out my camera before photographing, because I always ask questions in my mind: “What is the photo used for? For just sharing with friends? For exhibitions? For books? And how can it impact people in society?” It is more than just beautiful photos with good light and compositions — what is the message of each photo?