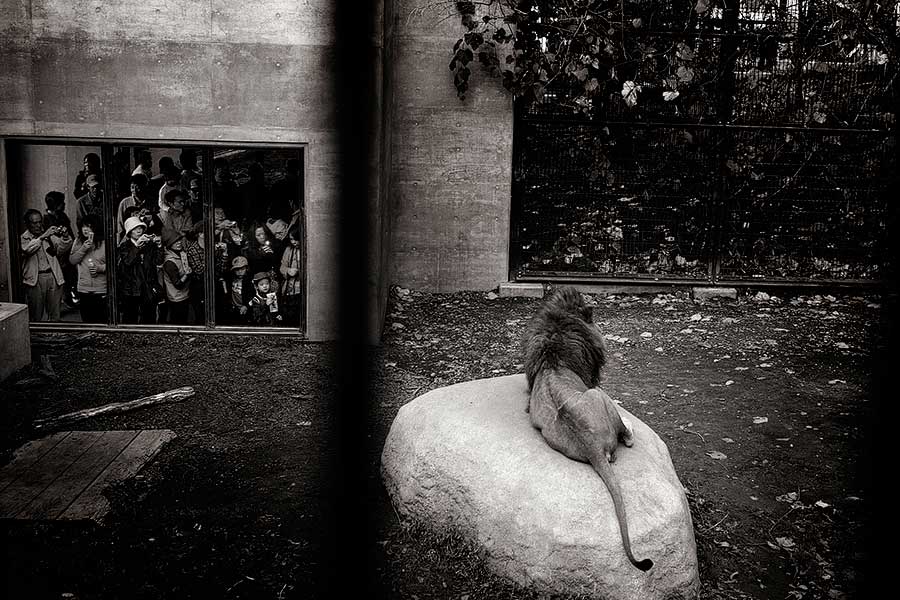 One of my ongoing personal projects is named ZOO. The project is simply doing Street Photography within the confines of a Zoo. It started off when I visited Arashiyama Zoo in Hokkaido a few years ago and found myself more fascinated with the behavior of the people rather than the animals. There were hoards of people moving from enclosure to enclosure and everyone had a camera. Even the children were using the camera on their Nintendo DS handheld to take photos! At each enclosure the people would be snapping away with their cameras and exclaiming excitedly whenever the animals in the enclosure did something other than staying still. It reminded me of groups of paparazzi stalking a famous person. The following photo was taken during my visit to Arashiyama Zoo.

The Zoo has been one of my favorite places for Street Photography chiefly because of the many interesting juxtaposition opportunities available as well as being able to easily blend into the crowds because practically everyone is carrying a camera. The main things that drive my composition in Street Photography are juxtapositions, lines, layers and the available lighting; so I am always on the lookout for these. In Zoos, I can juxtapose animal vs human and there also tends to be many lines (cages, viewing windows, etc) all around. The layering comes through how I decide to frame the photograph in my viewfinder/LCD screen to create depth (foreground, middle ground, and background). Sometimes it is the available light in certain areas that will catch my eye first and I will try to utilize it to create a more compelling photo by waiting for people to enter the lit area. The juxtapositions tend to make a seemingly normal setting turn into something out of the ordinary. I like what writer/photographer John Rosenthal said in an interview:

‘Sometimes it’s hard not to think of photography as an act of aggression. You’re stopping people from the flow of their lives, you’re cropping them from the space in which they live and have their meaning, you’re juxtaposing them to something they didn’t know they were next to. You’re objectifying them according to your terms, not theirs – for who would choose to be objectified? It’s very complicated, but the fact is, most photographs reduce us.’ ~John Rosenthal: The Ethics of Photography

I visited the Ueno Zoo in Tokyo in November 2011 for the second time where the Fuji X10 was used exclusively during my walkabout in the Zoo. I greatly enjoy the shooting experience that the camera provides and once again, am quite happy with the results.

The following are a selection of photos from the shoot. For most of the photos, I used the following settings:- Shutter Priority (1/200 or 1/250), ISO set to Auto ISO 1600, Image Stabilization Off, and Film Simulation set to B&W. The RAW files were post processed using Capture One Pro. The zoom lens on the Fuji X10 is of a useful range but I still try to discipline myself by sticking to a focal length from 28mm to 50mm. About two-thirds of the photos were shot at this range with the remainder at the tele end when I needed more reach or if I wanted to blur out the background.

This post is Part 2 of “Street Photography in Japan with the Fuji X10″.