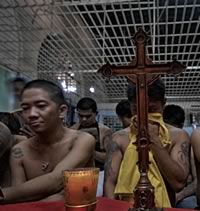 Flagellantism began as a militant pilgrimage and was later condemned by the Catholic church as a heretical practice .The practice had it’s origins in the 13th and 14th centuries. Flagellation is a form of penance in the church for sinners to atone for their sins. In the Philippines, a predominantly Catholic country, rituals revolve around the processions, hymns, distinct gestures, uniforms, and discipline. It was also said that when singing a hymn and upon reaching the part about the passion of the Christ, devotees must  drop to the ground, no matter how dirty or painful the area may seem. During annual observations of  the lenten season, a number of men and women get crucified in the Barrio of Cutud, San Fernando, Pampanga Northern Philippines. Similar crucifixions and other rituals in other areas of the country.

The annual celebration of gore and  obscurant ritual embellished in blood, crucifixions, and whipping is witnessed by an international media circus and influx of tourist reaching fifty to seventy thousand each year, coming from all parts of the world . It is an inescapable grotesque phenomenon in the celebration of Christ’s suffering and detain the Philippines.