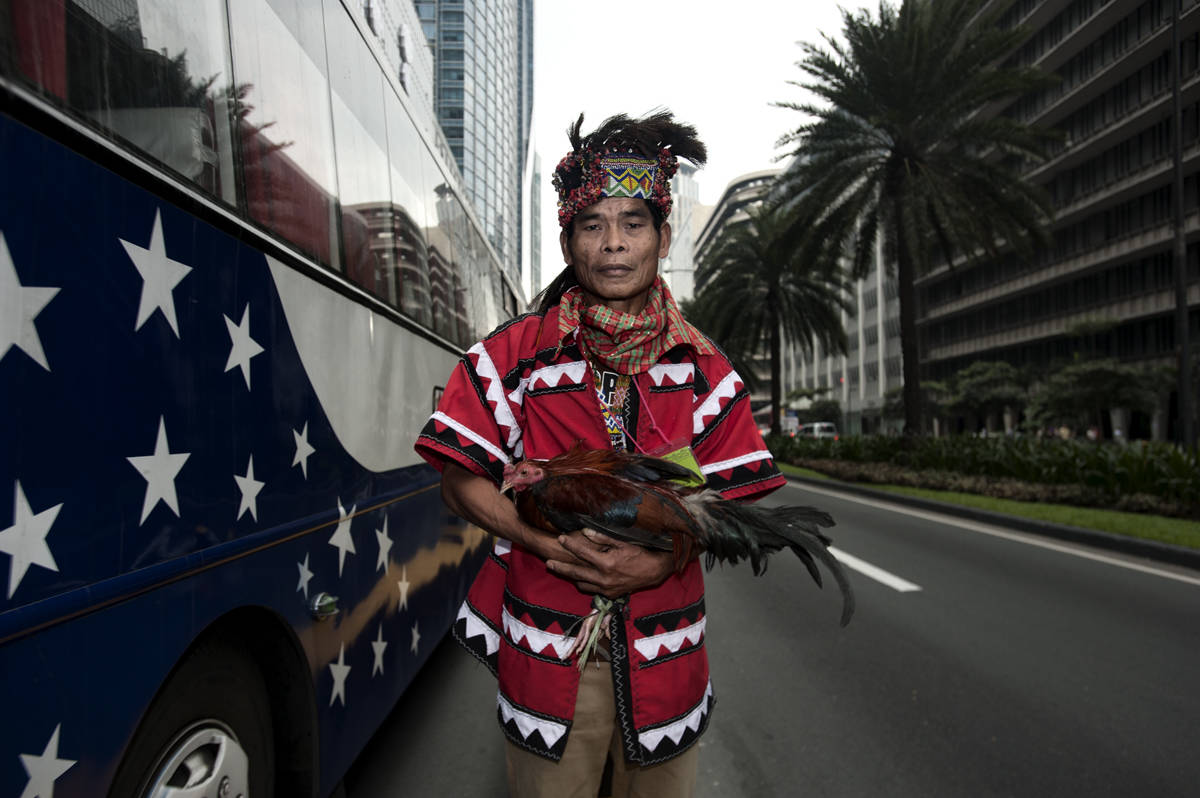 I’m currently doing a personal campaign to show the effects of large-scale mining in the Philippines. These portraits of Lumads from different tribes in Mindanao photographed in urban centers aim to show their alienation from their own land, and to possibly raise the discourse of why they are here in urban centers instead of their own domain.

Marginalized, exploited, and killed, the Lumads have endured for centuries, attacks against them and their land, all in the name of ‘development’. They were here long before our nation was established, and yet they continue to struggle for survival.

Bebeth Kalinawan, a Mamanwa from Cabadbaran, Agusan del Norte, recalls her ordeal as she fought for her life after being hit by government troop’s bullets while having lunch with her family on their farm. Because of heavy militarization, their community and family took shelter in evacuation shelters for months and found their homes, properties and even their church burned down upon their return.

From the perspective of our indigenous people, large-scale corporate mining does not contribute anything good to their communities. Bae Likayan Bigkay, a 67-year old Ata-Manobo from Bukidnon laments all the pain and suffering that these mining companies have brought upon them.

The Lumads painstakingly take care of their resource-rich lands but these are systematically taken away from them. Their way of life drastically changes and continues to change. Those who oppose the mining operations were either pushed away from their land or killed.

Data from the Mines and Geoscience Bureau (MGB) of the Department of Environment and Natural Resources (DENR) show that the mining industry’s contribution to the country’s gross domestic product (GDP) ranges only from one percent to 1.7 percent from 2006 to 2010 and an employment contribution of only 0.5 percent from 2008 to third quarter of 2010.

Experts have also noted the huge contribution of these mining and logging operations to the floods, causing more death and disaster because the natural protection from the environment are being destroyed at an alarming rate in which the lumads are one of the most affected.

“We are not animals. We are not pigs and chickens that you can just shoot at.” Bae Emil Digkalay-oban, from the Banwaon tribe says as she tells her story and the plight of her community in Agusan del Sur.

Photo Essay: Forty and Some Things, by Peter Teh
Death by Drowning, by Dianne Rosario
TOKHANG: Filipinos document the deadly drug war in the Philippines